Our Amtrak train from New York weaved its way through the snowy landscape on our journey to Montreal.

It was cold very cold and to get some idea of just how cold it was, the inside of the back door on the train was iced up.

Border officials entered the train at the Canadian border to check and stamp our passports before our train continued toward Montreal.

This was our first visit to Canada and we were all very excited to be there.

We had two housesits planned to take us through the Winter in Canada but first, we had a week free to explore the city of Montreal.

After a long journey, our train pulled to a stop in Montreal’s Gare Centrale.

We layered up for the bitter temperatures that awaited us outside the carriage.

It was New Years Day 2018 and Montreal was blanketed in thick snow.

Now we knew that we were in French-speaking Canada but what we didn’t realise was just how French everything was, not just everyone speaking French but all the signs are in French with very little English around.

It made things interesting as our French is very sketchy.

We managed to get Metro tickets and rode the train to a stop near to our Airbnb.

It seemed so strange to be in a cold snowy climate after spending so much time in Mexico and other hot climates but it was a good strange.

We trudged through the dark and empty streets with snow falling gently around us.

Our Amtrak Train From New York To Montreal 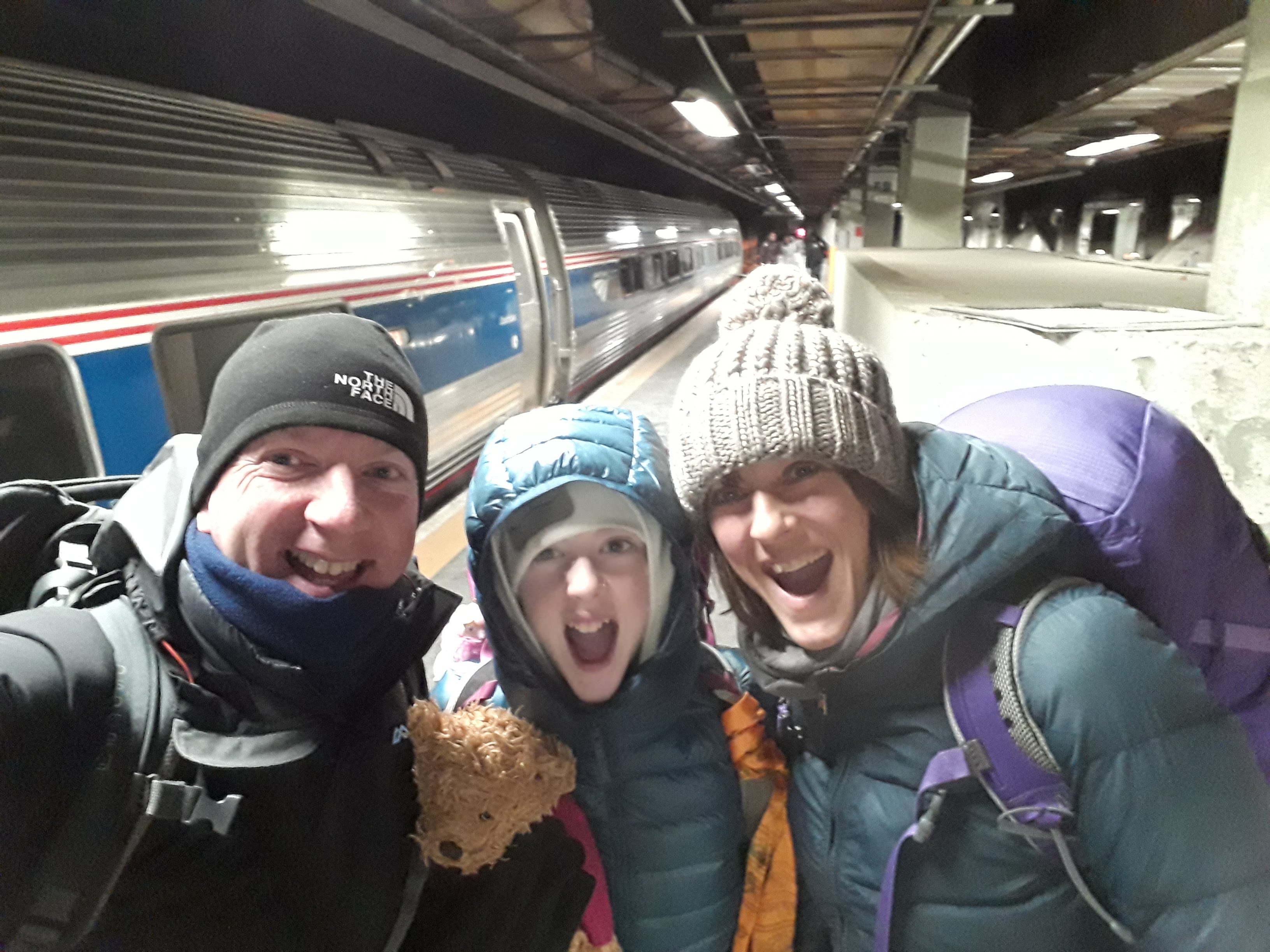 The temperatures in Montreal continued to drop and we faced lows of minus 30-35 degrees Celsius.

Basically, we wore most of the clothing we had and layered up with thermals, fleeces, padded coats, raincoats, gloves, hats, scarves and boots.

Actually, it was quite exciting to be in such low temperatures with snow as we hadn’t really experienced this type of weather before now.

It was a really impressive operation to clear all the streets before the next fall of snow.

One of the unique ways with which Montreal copes with the freezing temperatures is to have built an entire underground city.

Like a maze underneath the heart of the city there lies a warren of tunnels that connect shopping malls, cinemas and restaurants doing away with the need to venture above ground in the coldest of weather. 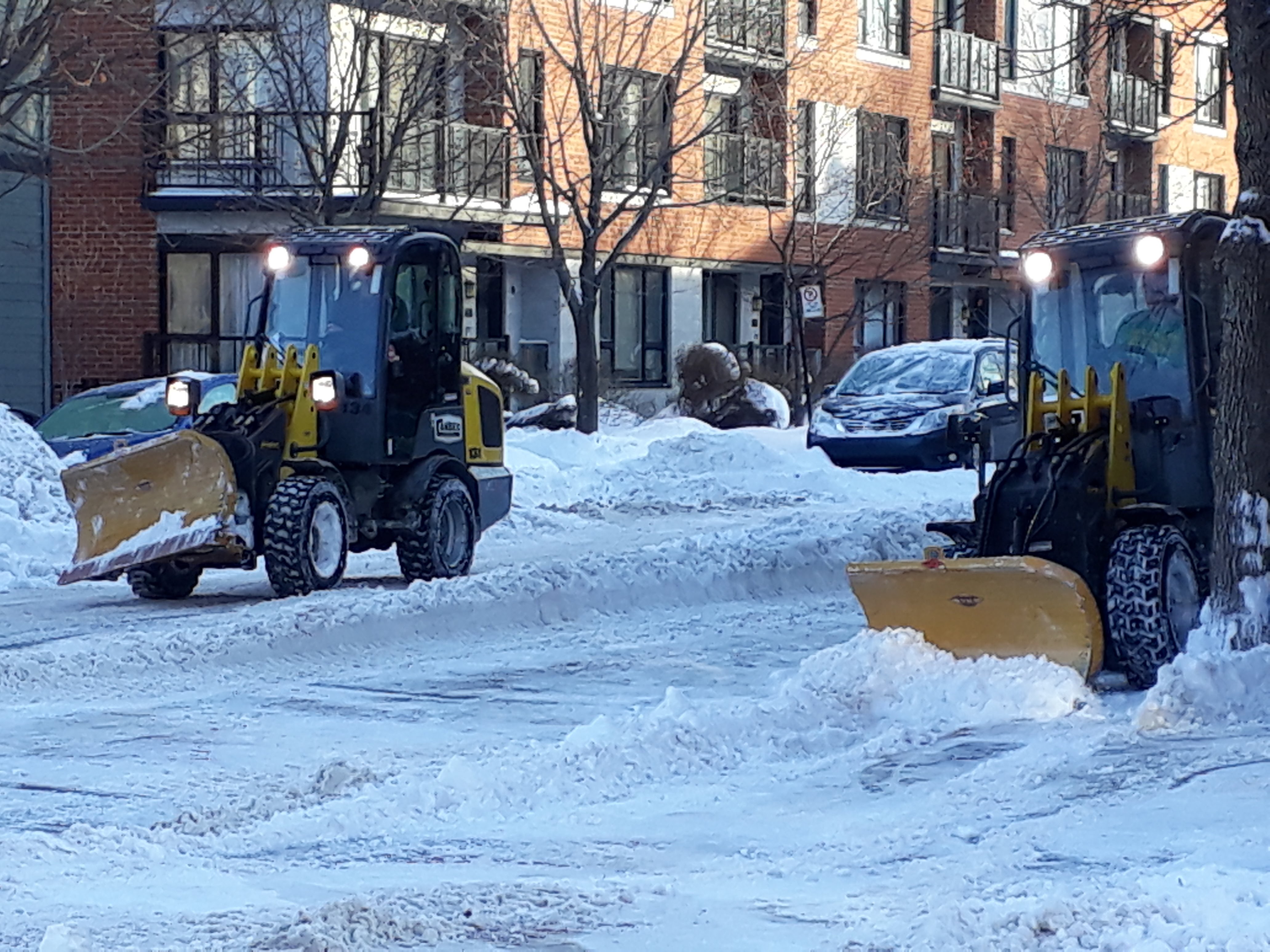 Clearing The Snow From The Streets Of Montreal 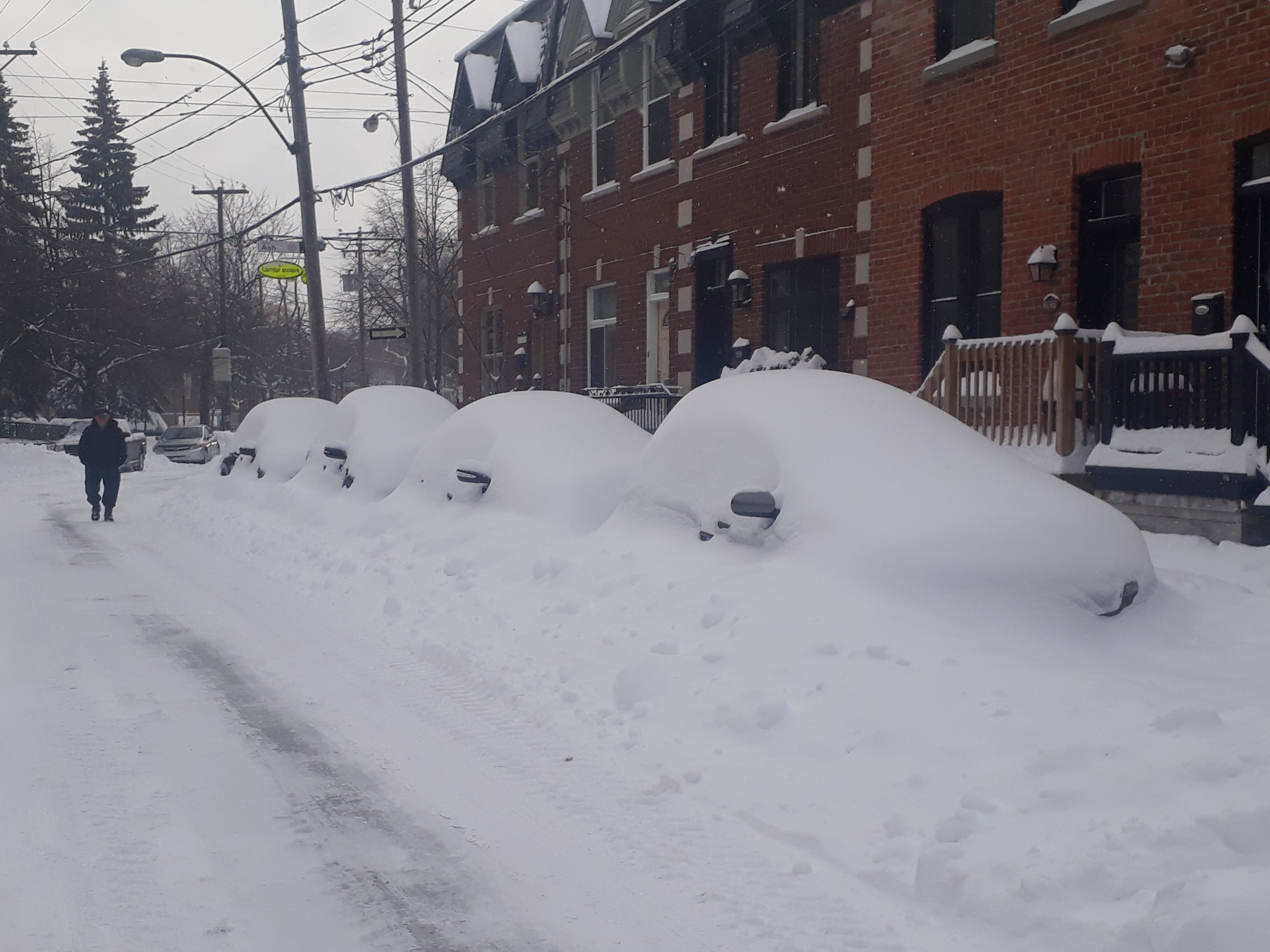 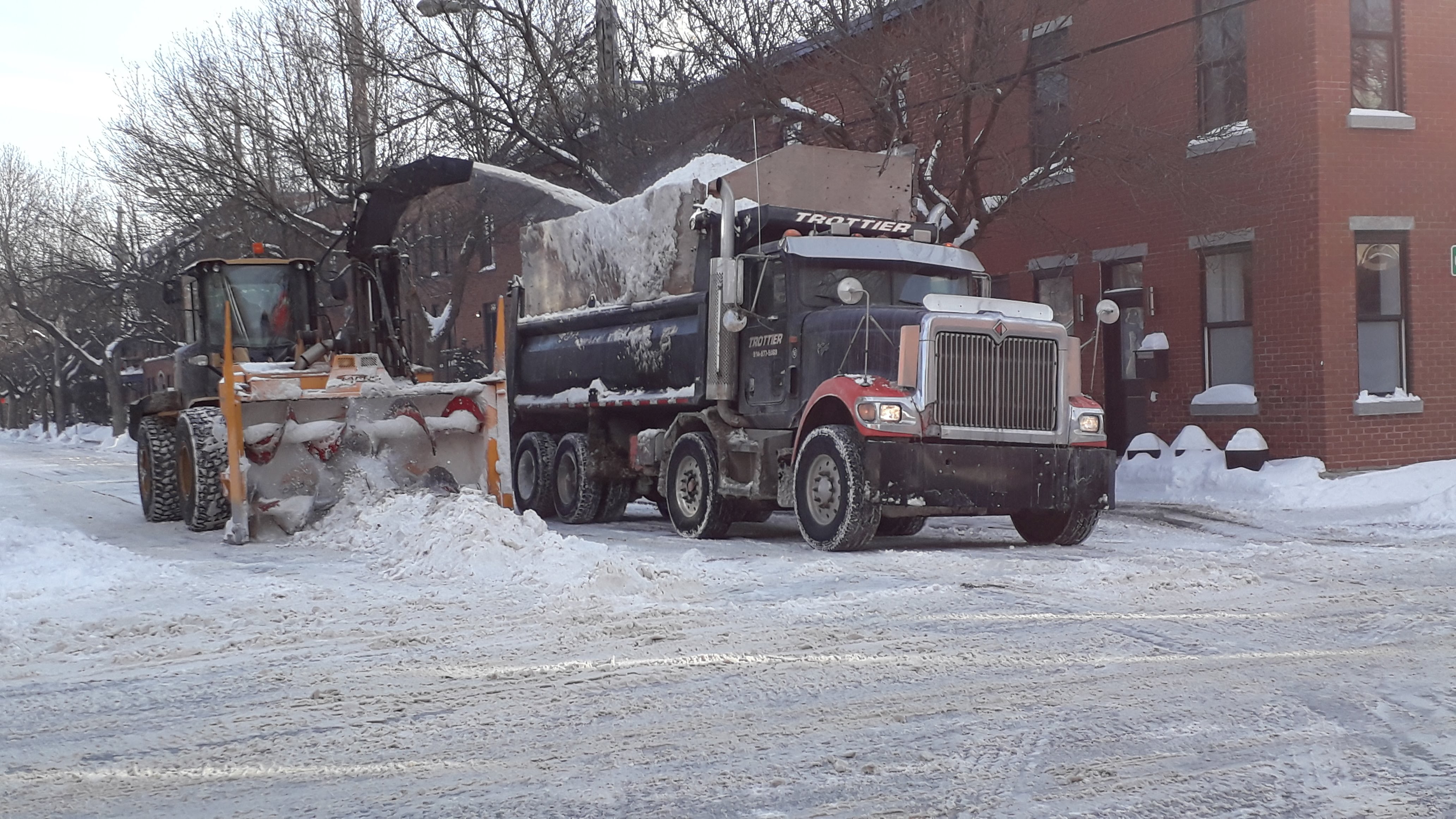 They Don’t Just Move The Snow, They Take It Away!!

Even though it was so cold we ventured up into Mount Royal Park overlooking the city.

The park is huge and at this time of the year has lots of Winter sports going on including ice skating, snow tubing, cross country skiing and snowshoeing.

Annabel had a go at tubing on the downhill course and could be heard screaming with joy for miles around.

Eventually, it just got too cold to stay outside and we retreated to the Mount Royal Lookout lounge.

Once thawed out a bit we braved the freezing conditions to take some pictures from the lookout over the city below before heading home to our nice warm house. 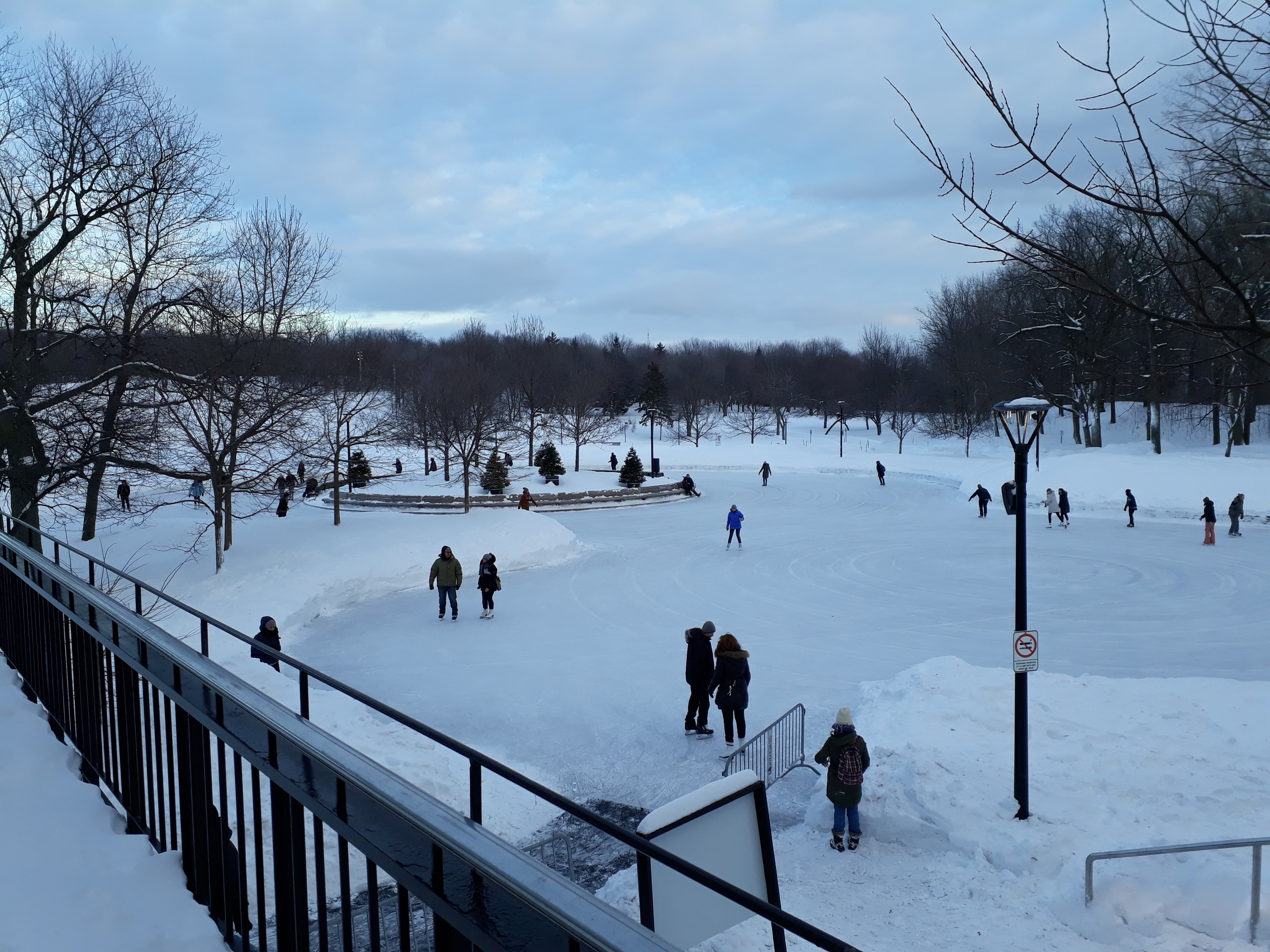 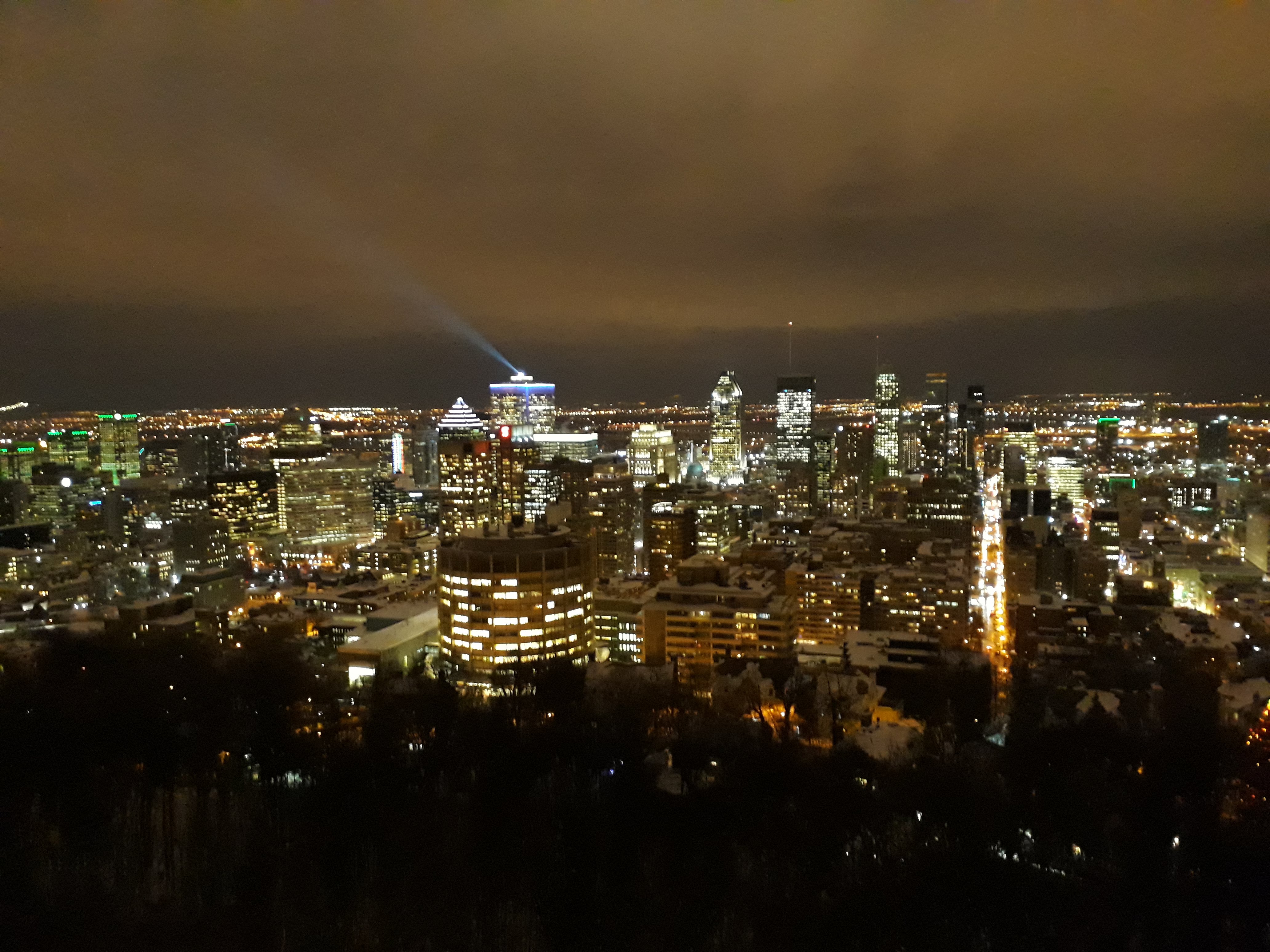 Sue had her birthday in Montreal and she had loved going to Mount Royal so much that we decided to go again.

On this visit, we walked around the park right to the highest point where there is a huge metal cross.

There had been more snowfall but the paths are all groomed so that it’s easy to walk on the compressed snow.

Afterwards, we headed down into the city to a Barbie exhibition that was on.

We’ve never seen so many Barbies!!

One of our favourite fast food joints, Five Guys, was just down the street so we made sure to make a pitstop there before heading back home. 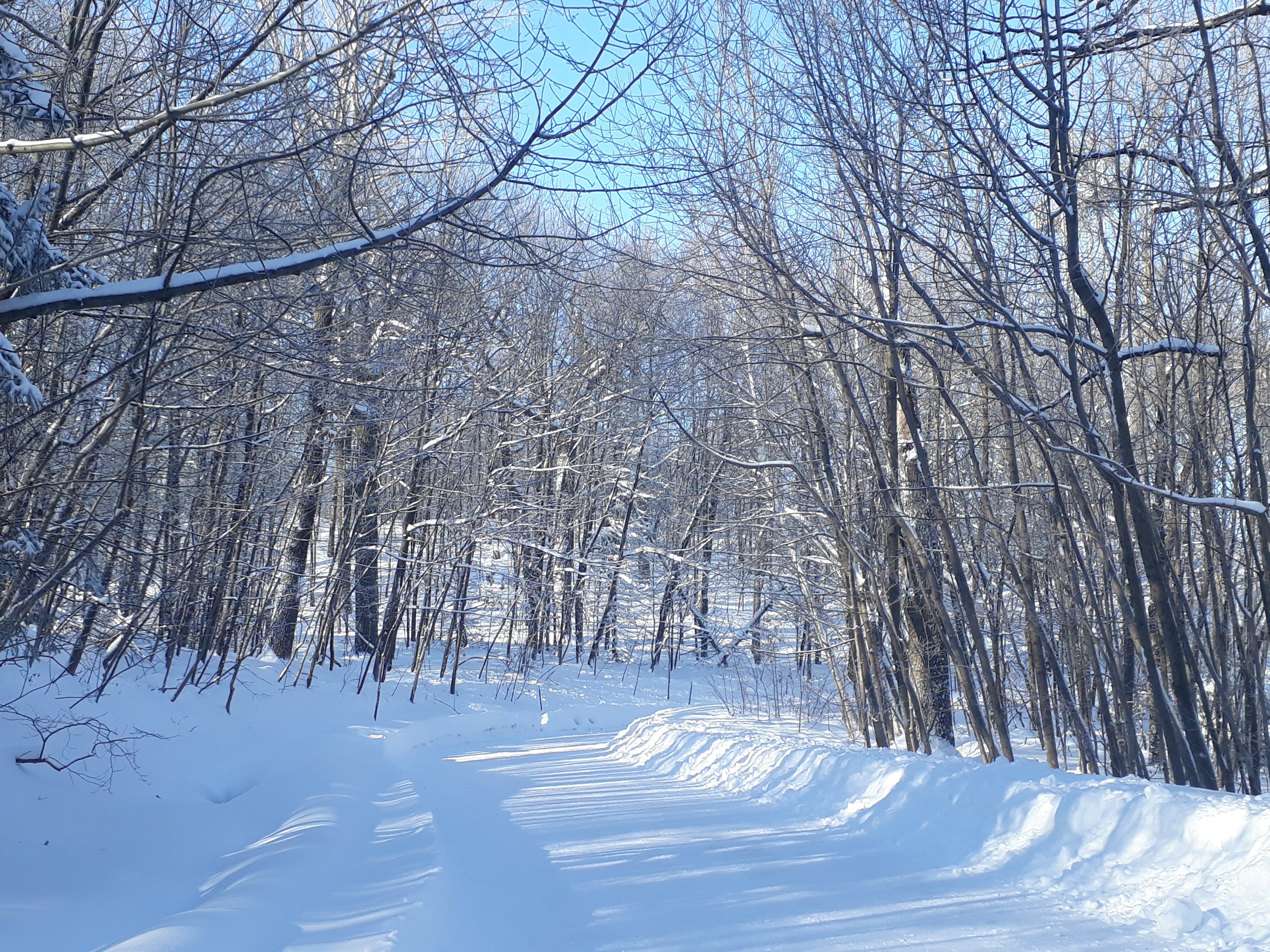 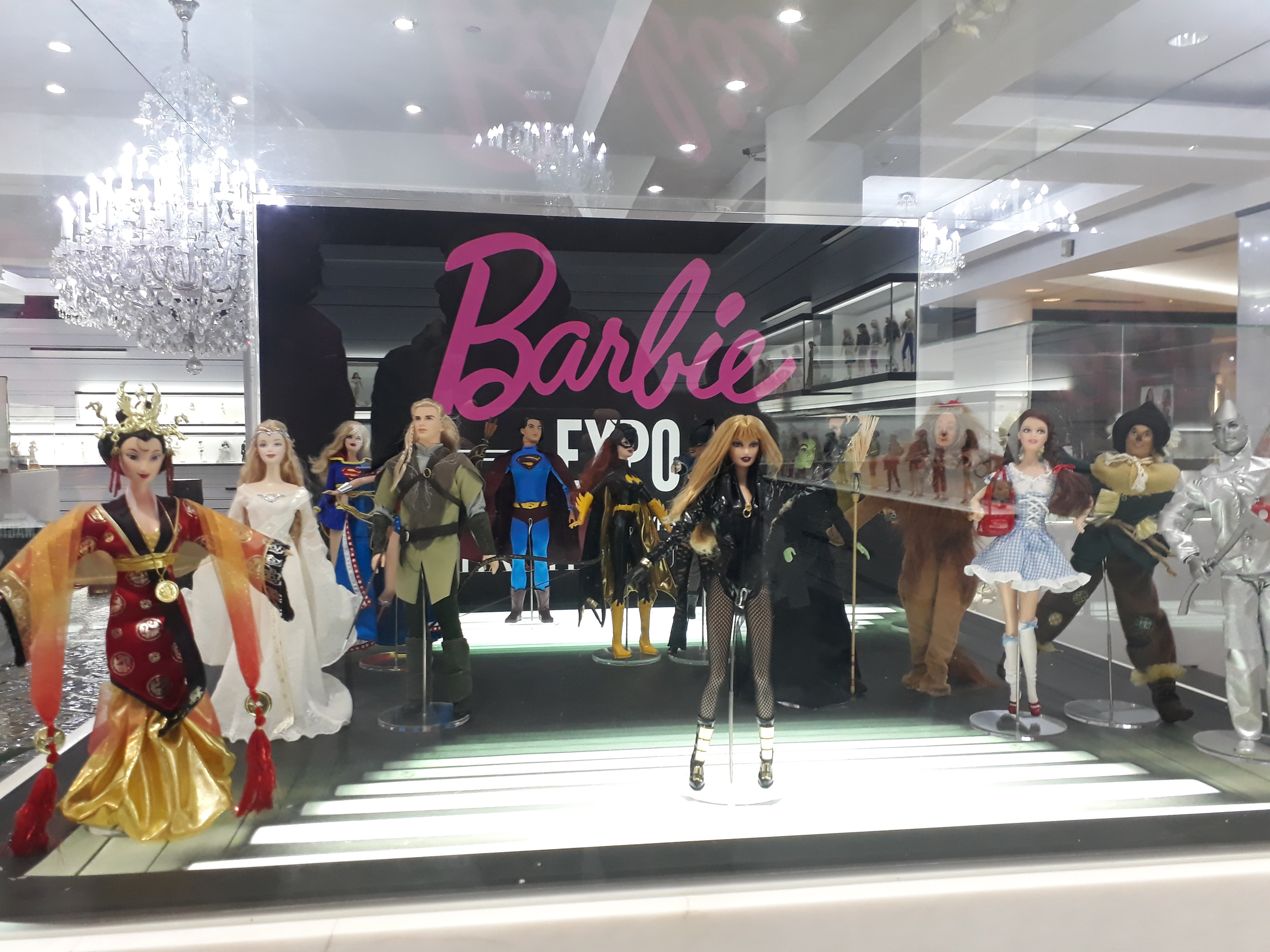 The Barbie Expo In the City Is Pretty Cool

One of the most interesting places we visited in Montreal was the Pointe a la Calliere Museum which lies right on the birthplace of Montreal.

In fact, the museum that is half above and half below ground has within its very foundations an archaeological site that dates back to the 14th Century,

You can still view the old Customs house, Catholic cemetery and sewers from those early periods.

The fascinating museum also has collections of artefacts from the First Nations of the Montreal region on display.

It’s a really interesting and educational place that really brings the history of Montreal alive.

Montreal sparkled with Christmas lights and flakes of snow fell as we made our way to the amazing Notre-Dame Basilica.

The interior of the church is just stunning with its ornate decoration and beautiful lighting.

There’s a light show here on some evenings but unfortunately, we were unable to attend.

We met up with a good friend and her daughter who had never seen the church before and they loved it too. 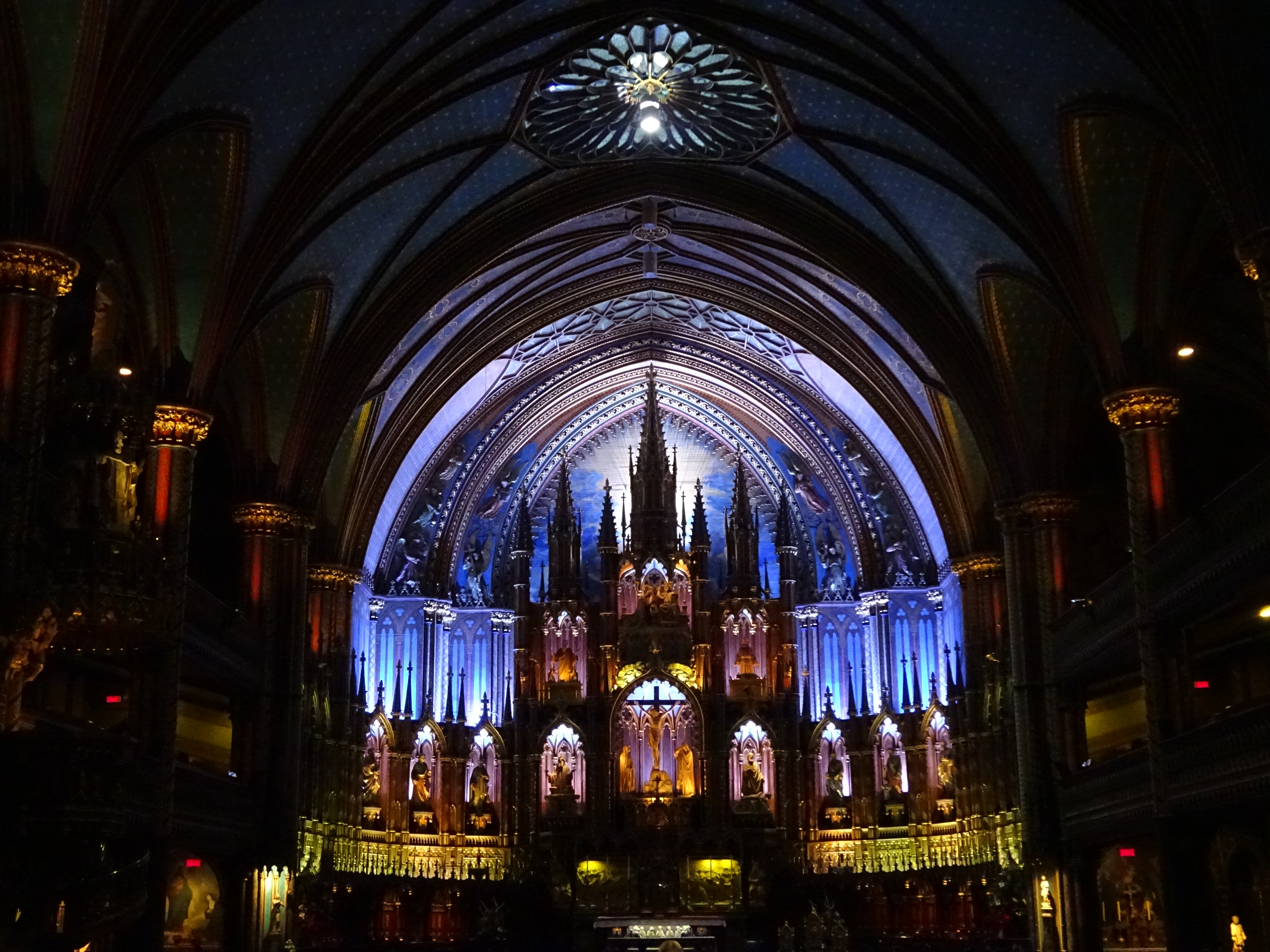 The Interior Of The Notre-Dame Basilica Is Just Stunning

Our time in Montreal all too quickly came to an end and it was time to move on.

We absolutely loved the time we spent there which was made even more special by the snowy conditions.

Annabel fell in love with Canada and is one of the countries she looks forward to visiting the most.

How to get to Montreal

Montreal is pretty close to the US border so whether you’re coming from the US or abroad, Montreal has many transportation links.

We travelled to Montreal on the Amtrak train from New York City.

It’s a beautiful journey especially with snow on the ground.

The train leaves New York and travels alongside the Hudson River North through New York State.

Montreal s connected by VIA Rail to the rest of Canada with regular services across Canada all the way to/from Vancouver.

It also has its own international airport but tends to be a little pricier than flying to and from cities like Toronto.

Long distance buses are available with Greyhound Canada being the main provider.

One of the only Canadian Megabus routes runs between Montreal and Toronto and we were lucky to get some really cheap fares for the trip.

Montreal has a good Metro system which connects to the outskirts of the city.

It’s relatively inexpensive to travel on and gives you access to all the main sights.

Once you’re in the city centre then you’ll find it all very walkable and most things to see are between Mount Royal and the waterfront.

We didn’t use local buses but like most cities in Canada, it has very regular bus lines that serve the city.

Accommodation prices in Montreal are pretty expensive and it’s not a budget destination by any stretch of the imagination.

We stayed in an Airbnb in one of the suburbs of the city which was a little cheaper than staying in the centre.

Like staying in any city it really depends on what you will be doing and where you want to be based as to what accommodation best suits you.

Being that there is such a strong French influence in Quebec Province it’s inevitable that you’ll find plenty of French cuisine in Montreal.

This is really apparent in the local markets and grocery stores where wines, cheeses and bread are plentiful.

Bagels are very common and eateries just dedicated to this Montreal favourite dot the city.

A dish that is very typical and that you’ll find all over Montreal from fast food joints to classier restaurants is Poutine which consists (in the simplest of terms ) of fries covered in cheese curds and smothered in thick brown gravy.

There are many variations of the dish and variations in the quality depending on the gravy used etc. 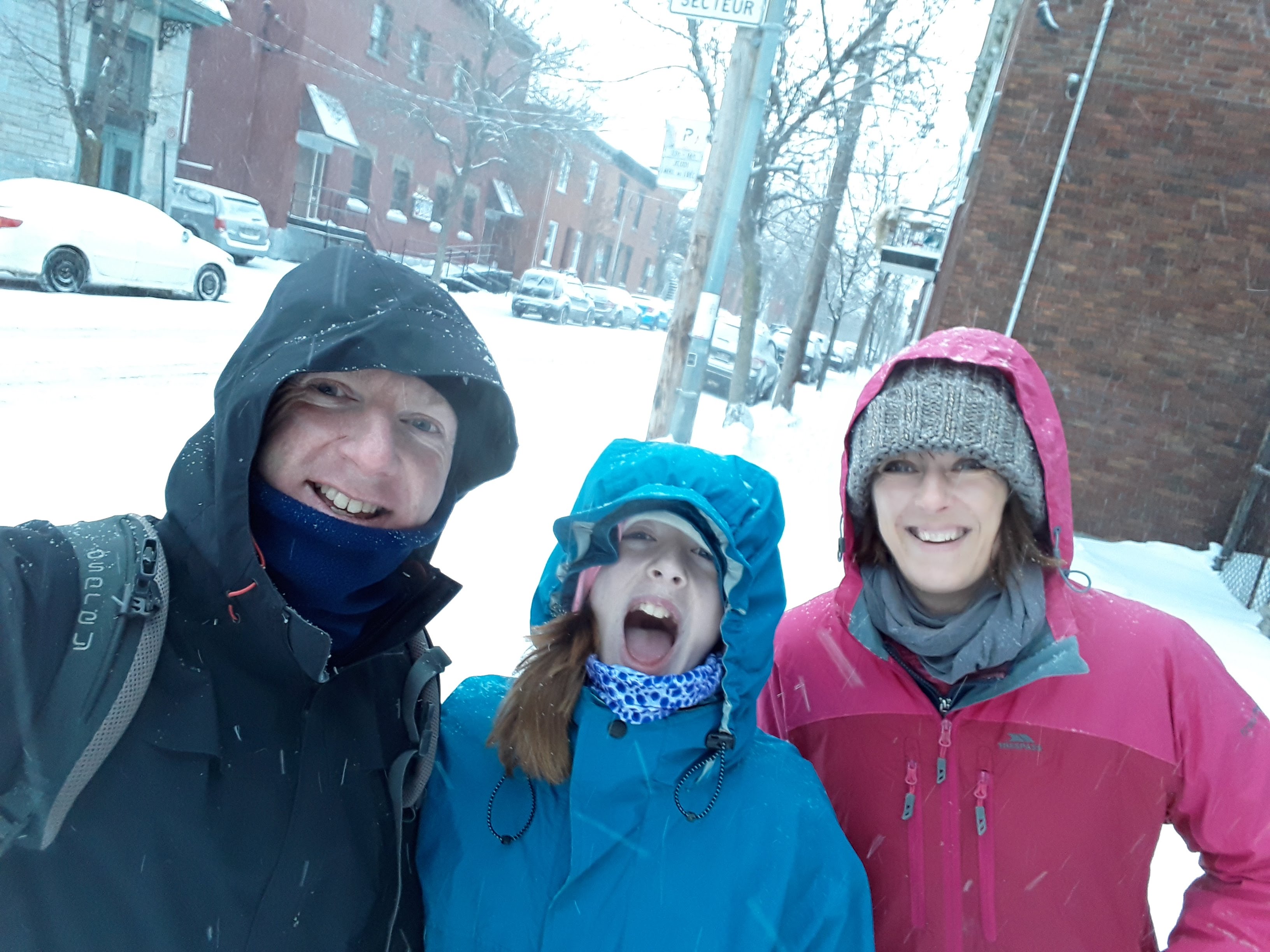 You Can Discover More About Our Adventures In Canada Here