Mount Batur lies in the North Eastern area of the island of Bali and can be reached from the main tourist areas of the island.

At 1,717 meters, it’s not the highest volcano in Bali by any means, that title goes to Mount Agung, but it is one of the most active and can be climbed fairly straight forward by most people.

There are loads of tour companies that run trips, trekking Mount Batur Bali to watch the sunrise over the Balinese countryside below.

Sue happened to have a connection with someone who could run trips and we asked if he could put together a trip for us and two other families we knew, who wanted to go.

We had a group of six adults and five children, with the youngest being 5 years old so we wanted a private tour so that we wouldn’t delay a bigger group of getting to the summit.

We negotiated a price which seemed pretty reasonable.

There’s no need to hire a private tour as you can join a scheduled trip which leaves most days for the volcano but you will be part of a larger group. 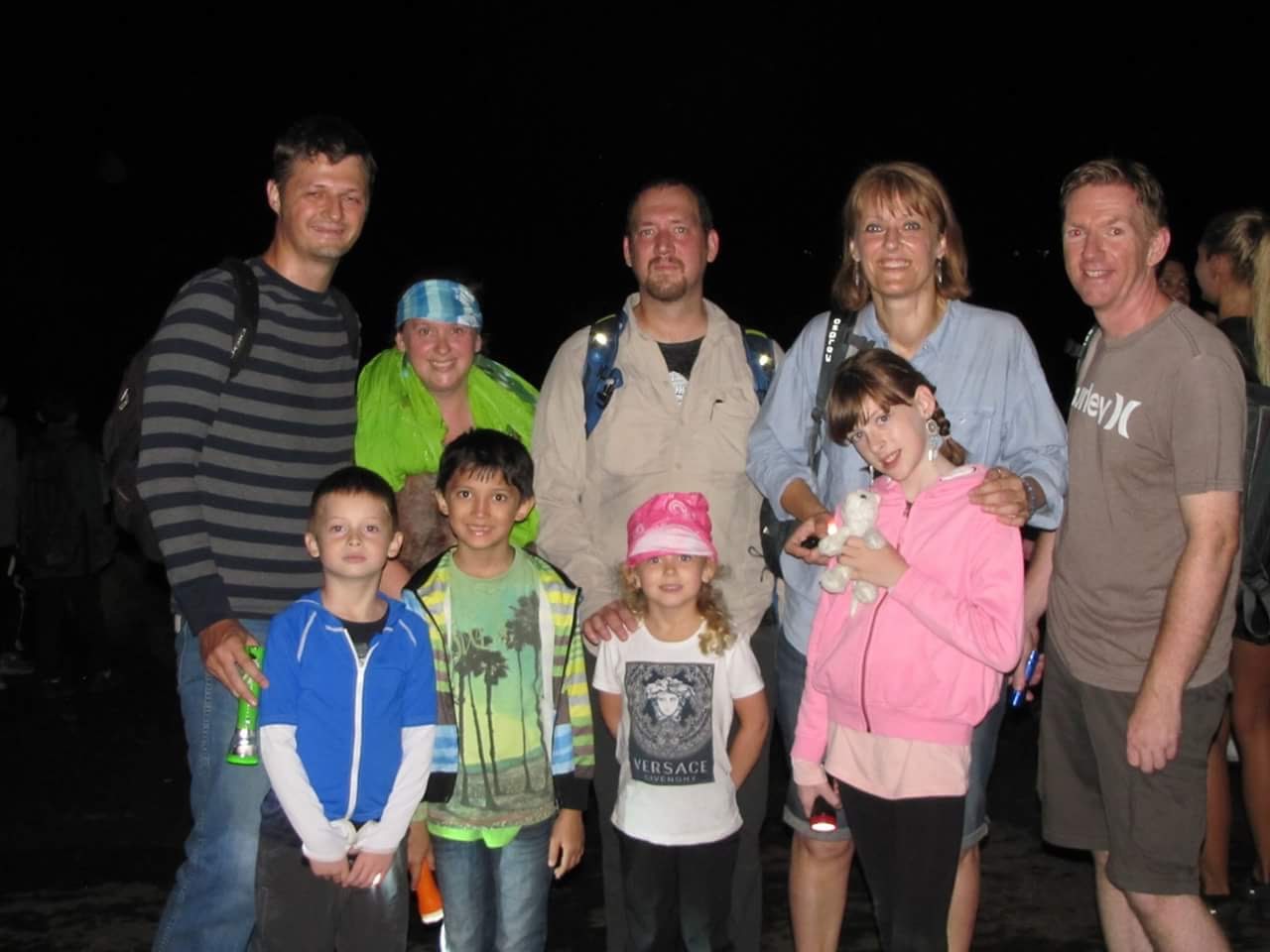 Two Other Families Trekked Along With Us

Everyone in our group was based in Ubud so we got picked up first at 2 am, yes you read that correctly, 2 am!!

It was such a relief when the minivan actually turned up and we knew the trip was on.

After picking up the other two families and an extra couple, we set off on the hour or so drive to Mount Batur.

The minivan makes a stop at a simple cafe to grab some tea and breakfast in the form of pancakes.

We hadn’t been there long when other buses appeared and disgorged their occupants for the same breakfast.

After half an hour we were off again in the van to the end of the road and the start of our climb.

In the car park, we were given torches and a bottle of water and met with our guides for the trek ahead.

The first section of the trek is pretty easy going on gently sloping ground through a forested area.

As we left the forest the view opens up and we joined a track that zig zags it’s way up through the foothills of the volcano.

Walking in the inky blackness of pre-dawn was amazing as we looked to the sky which was filled with thousands of stars shining brightly in the clear night.

Shooting stars sped across the sky in the blink of an eye.

We soon left the wide track to head straight upwards along a narrow and steep trail.

The climb got harder as we stepped up the rocky trail heading ever higher.

At this point, we split from the group so that we could reach the summit for sunrise.

It’s a very straight forward trail to follow and one of the guides followed close behind us as the remainder of the guides helped the younger children with the rest of the group.

At last, we reached the lookout where most people stop to watch the sunrise creep up over the landscape.

A thin strip of orange was starting to appear on the horizon as we sat in awe surrounded by lots of trekkers.

The rest of our party arrived soon after to catch the bright rays of the sun peeking up over the land below.

But this wasn’t the true summit!!

That lay along another trail stretching upwards along the crest of the volcano crater.

Sue and Annabel were fine where they were but I decided to go all the way to the top.

A guide came with me as we scrambled up through the loose volcanic sand to the very summit.

This final push is quite hard because of all the loose material you’re having to step up through but after half an hour or so we reached the summit and gazed across at the orange ball rising into the sky. 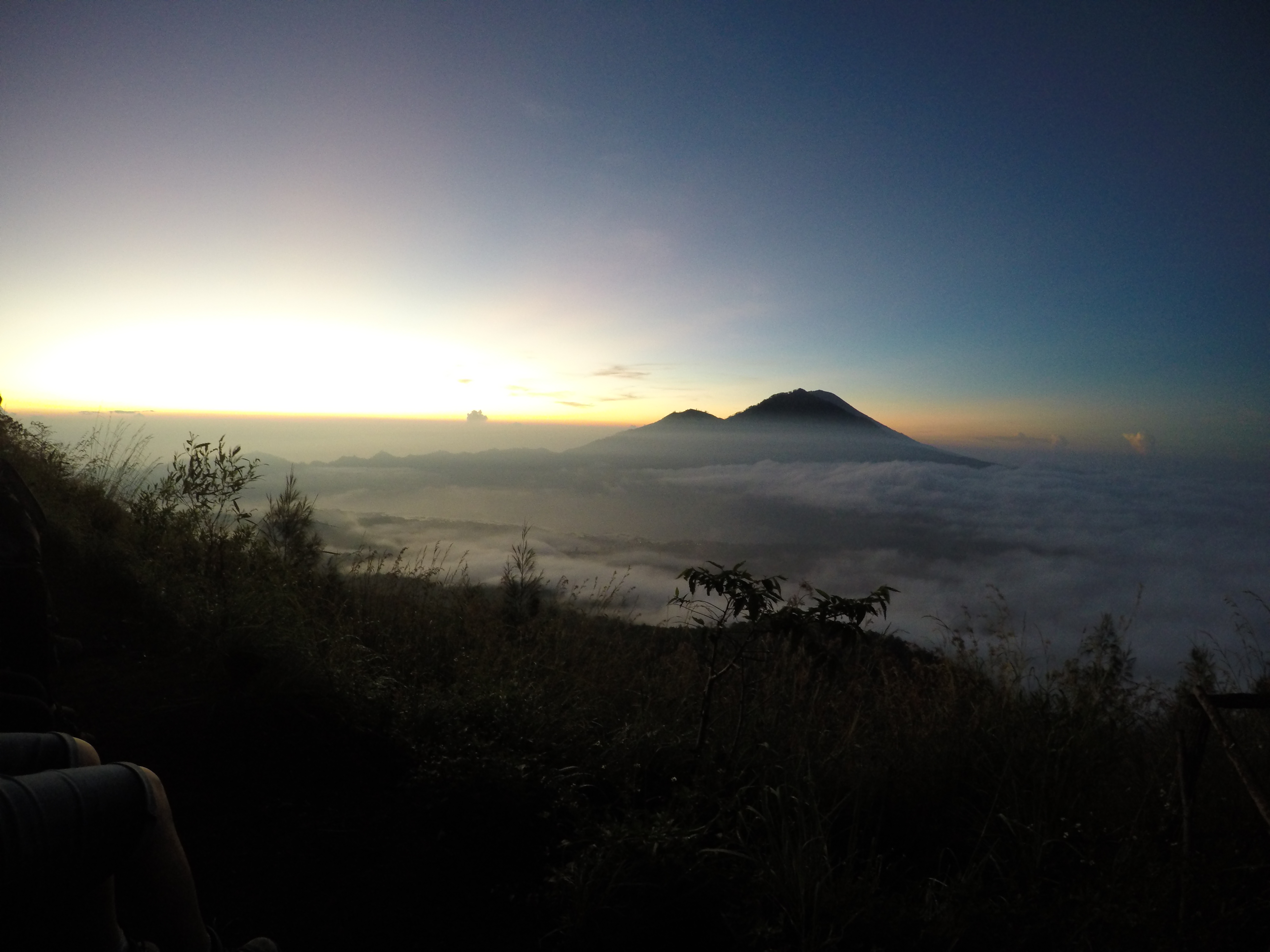 The Sunrise From Mount Batur 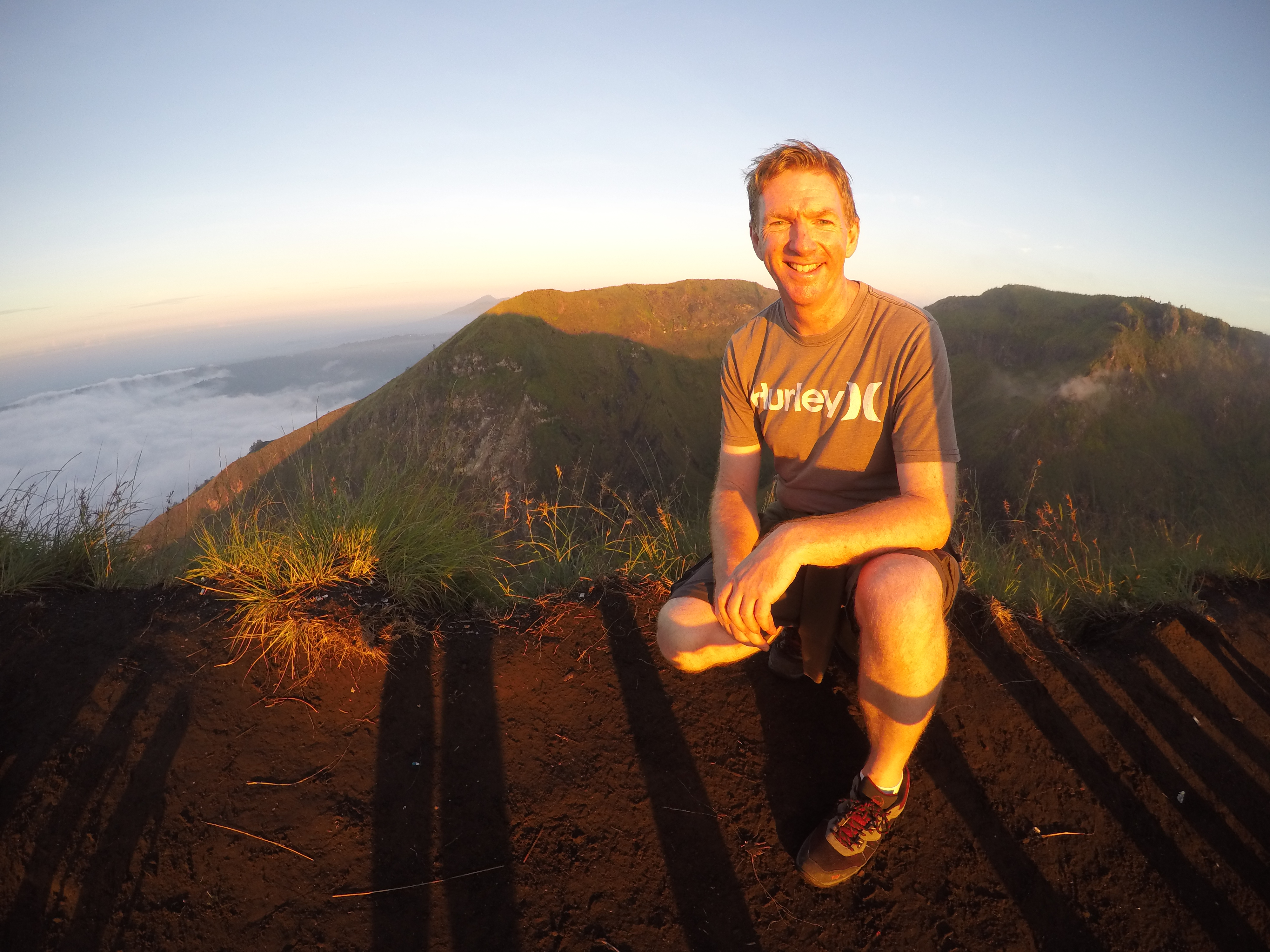 On The Summit Of Mount Batur

I gazed over the scene laid out in front of me.

Mount Agung volcano stood proudly in the distance, lofty at its over 3000-meter height.

A fluffy layer of cloud floated in the valley below with glimpses of Lake Batur through its gaps.

It’s a truly magical view but it was time to head back down to meet Sue and Annabel who waited below.

The guide made quick work of the descent as he half ran down through the dark loose sand.

I followed suit and quickly found my trekking shoes filling up with sand as we ran.

Back down with Sue and Annabel, it was time for our packed breakfast that the tour company provide.

A simple package of hard boiled eggs, banana and bread provided us with some much-needed energy.

We had time to explore the crater area a bit and our guides showed us where the vents of steam escaped from the depths of the volcano.

All too soon it was time to leave and head down but not before taking in the amazing view once more.

The descent can be quite hard on the knees as we stepped down over the rocky trail.

There are also lots of people heading down at the same time so the trail can get a little congested in places.

The children all done really well and must have been exhausted by now but kept on going none the less.

Once back at the wider track one of the women in our group decided her little girl had enough and caught a ride down the rest of the way on the back of one of the few motorcycles waiting in hope of tired trekkers wanting a ride ( for a cost of course ).

After retracing our steps through the forest and spotting some of the biggest spiders we’d ever seen, sitting in their huge webs, we reached the minivan and our ride back. 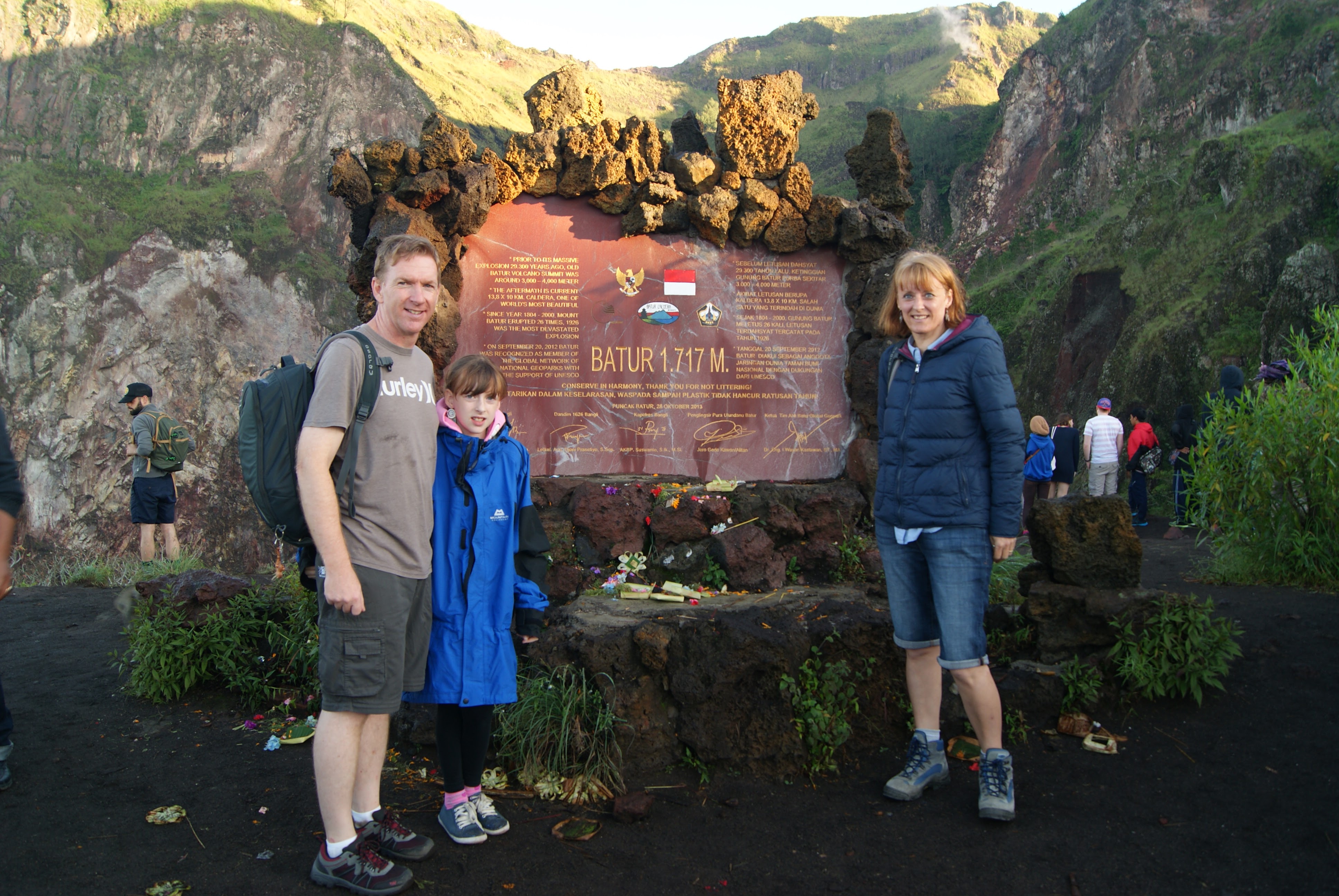 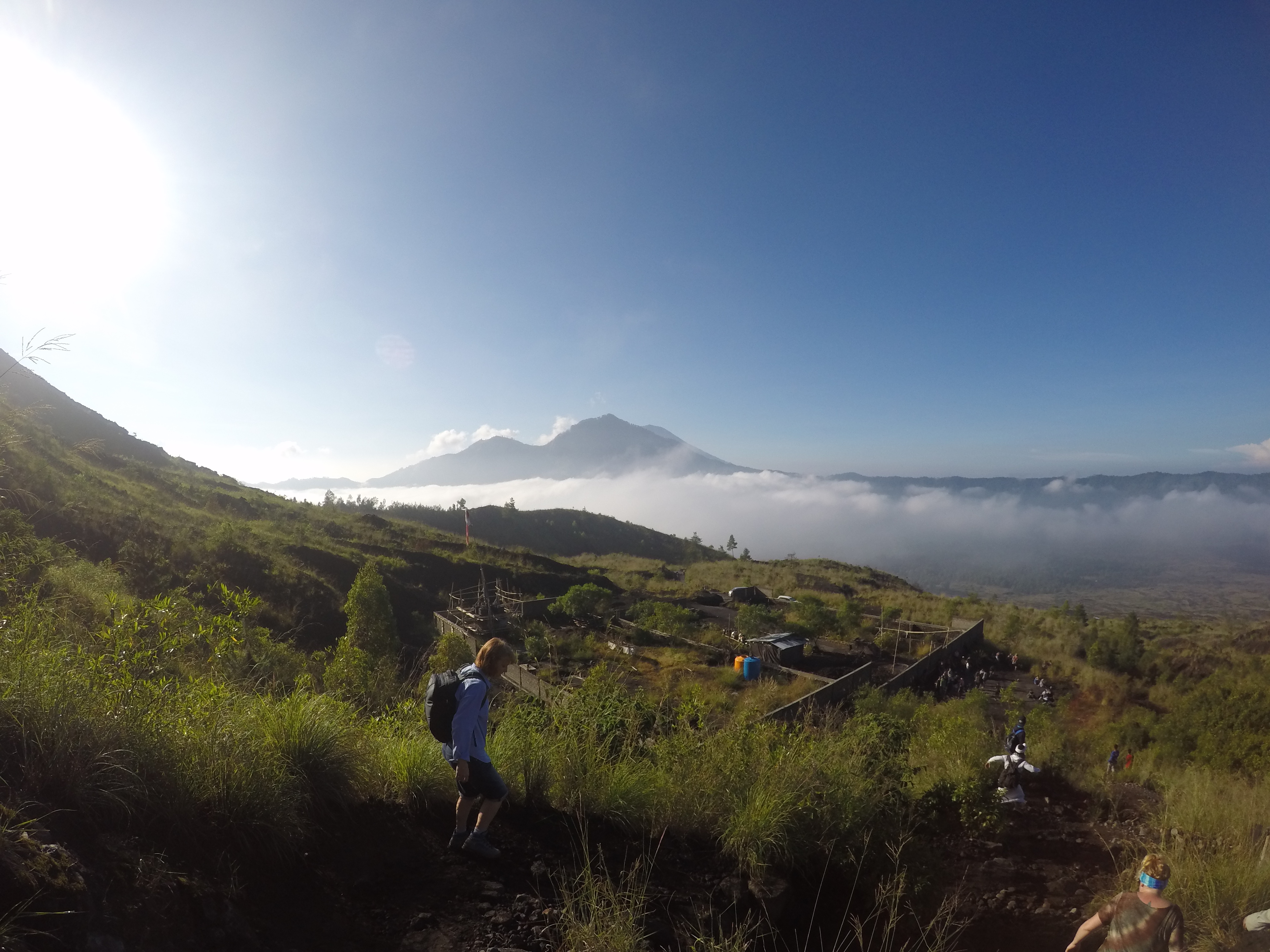 Mount Agung In The Distance

Most tours offer a stop on the way back to town and ours was to a Luwak coffee plantation where we were able to taste different types of coffee and learn about the process.

It was a pleasant and relaxing stop with a chance to look out over the countryside from a viewpoint on the premises.

Once back on board the minivan we drove through the lovely scenery which had been swathed in darkness on our drive in.

I think everyone was very tired by now and one by one drifted off to sleep until our arrival back in Ubud. 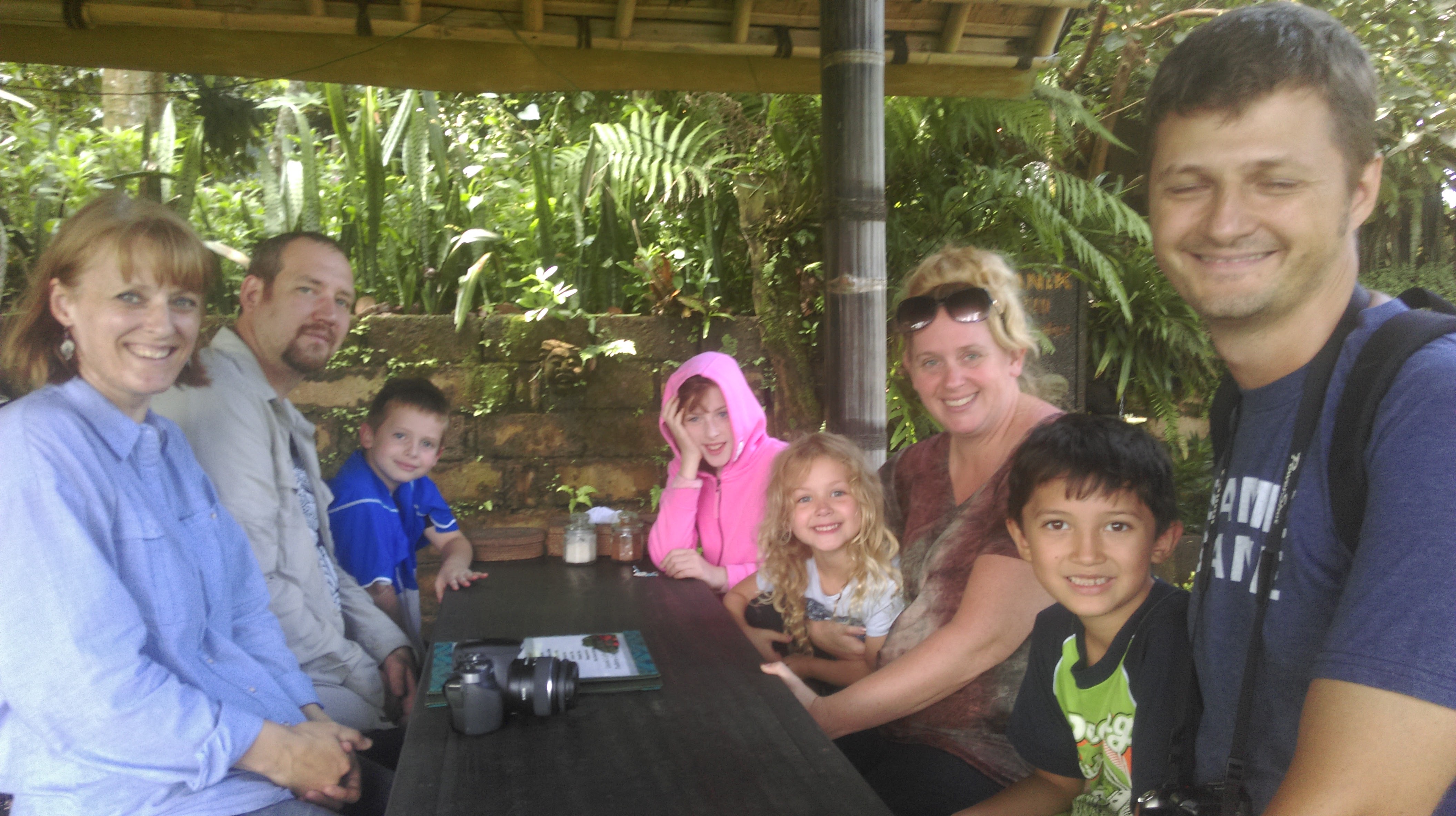 At The Luwak Coffee Plantation

Mount Batur 1,717 meters lies in the North Eastern area of Bali near to Mount Agung.

How To Get There

Hire a private car and driver

What Should You Wear

Some good footwear ( although we saw all sorts of footwear being worn, even flip-flops ) with a grip.

As you start the walk during the night it can be chilly but it soon gets warm climbing the steep trail so dress appropriately.

Although you may be warm on reaching the summit you will probably soon get chilly so bring a coat or fleece.

This is a mountain so weather can change abruptly. Be prepared.

How Hard Is The Trek

The trek is pretty easy and straight forward if you are reasonably fit but the loose and rocky surface in places can make it hard going and tiring.

The children in our group were as young as 5 and 7 and although they needed some help, they did really well.

The descent can be quite hard on the knees if you’re not used to it.

The views are worth the effort though and seeing the sunrise over the land is magical.

You can read about what else we did in Ubud here 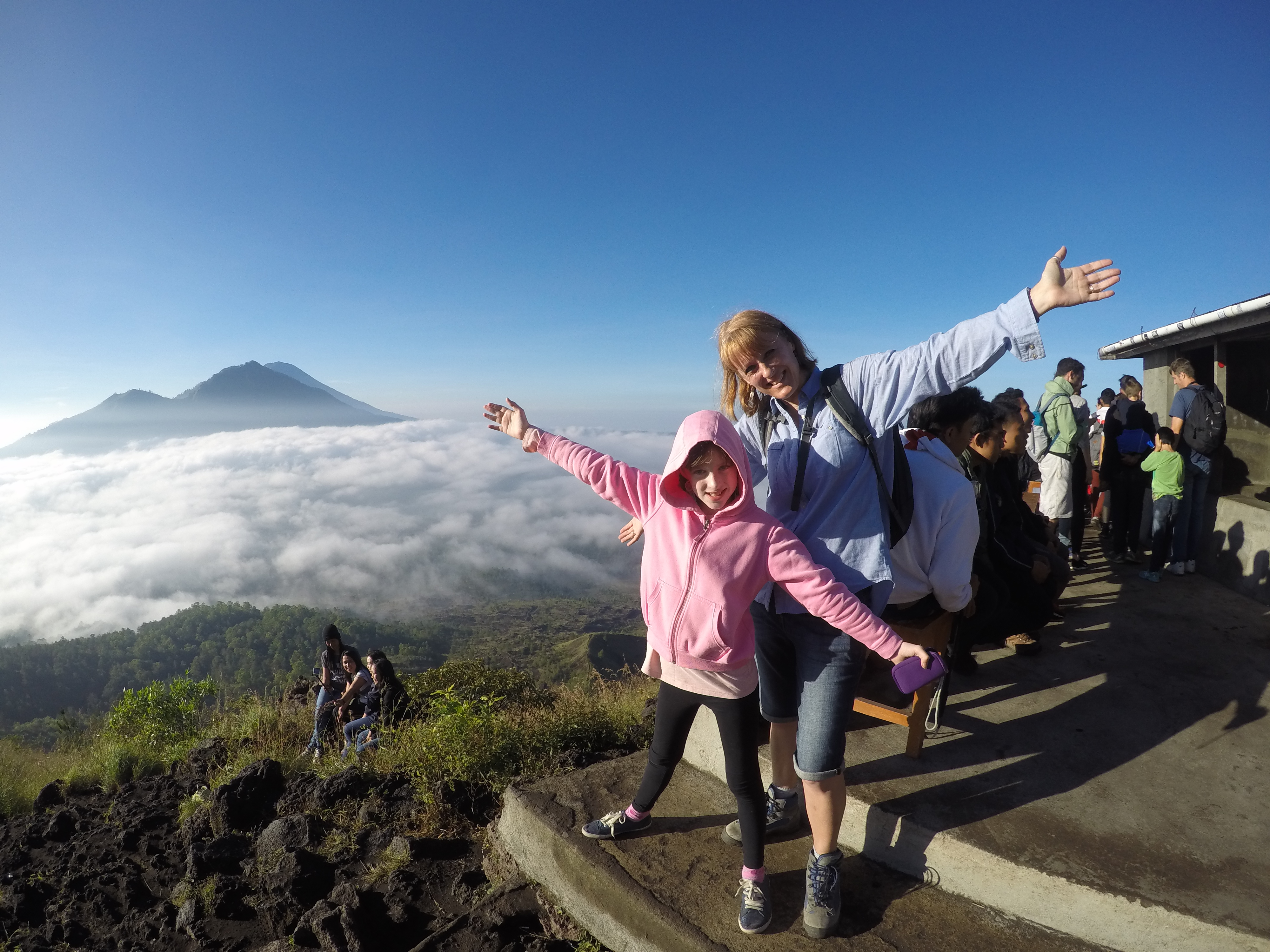 You Can Discover More About Our Adventures In Bali Here