There are so many things to do in Hanoi, Vietnam.

Whether you’re there for a few days or a longer trip you won’t go short of things to keep you occupied.

Both I and Sue had visited more than twenty years previous but on this occasion, we were just spending a few days there as part of a visa run from Thailand and showing Annabel what it’s like.

Hanoi has an old world charm about it especially if you explore the old quarter with its narrow streets filled with mopeds and rickshaws.

Here are our recommendations for things to do in Hanoi.

This is a difficult one because there’s no getting away from the fact that this place and its story is grisly but if you want to see a destination warts and all, then sometimes it’s about seeing the things that can be difficult.

We thought it was important to also show the darker side of history to Annabel as part of her education.

Life and history are not all roses and never will be.

On a side street a short walk from the old quarter we found the infamous prison building which was built by the French in the 1880s but famous for holding American POW’s in the American war of the 1970s.

Most of the prison was demolished in the 1990s but some of the cell buildings and courtyard remain.

It’s not the story of the American prisoners that takes centre stage though as thousands of Vietnamese revolutionaries were imprisoned here by the French in the early 20th century and treated very badly.

It’s not so much the displays that are grisly but just the atmosphere of the place with some of the original old dark cells on view as well as an ominous guillotine sitting centre stage in one of the rooms.

In the courtyard, you’ll find sections of a tiny sewage drain that prisoners crawled along to make an escape.

There is one section turned over to the story of the American POW’s but it focuses mainly on how well they were treated in the American named Hanoi Hilton.

You can make your own mind up about how close to reality these displays are.

Although a difficult subject and emotional environment, the prison does give an insight into the conditions that prisoners had to go through and the cruelty that has occurred in history.

We’re glad we visited to learn a bit more about Hanoi’s dark past. 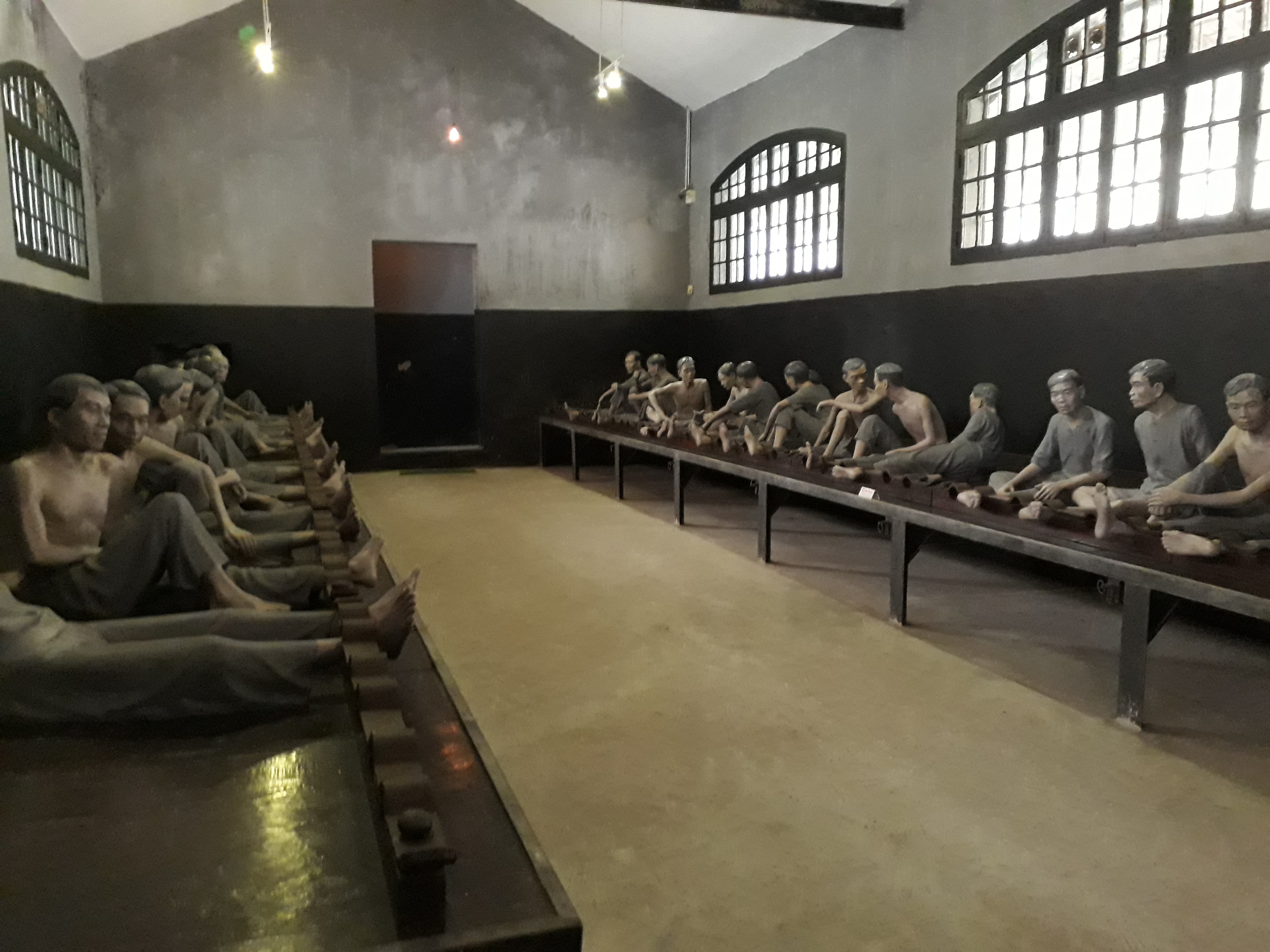 Reconstruction Of The Conditions Inside The Hanoi Hilton

No visit is really complete without visiting Uncle Ho’s resting place in the huge mausoleum at Ba Dinh Square.

Huge lines of people queue every day to pay their respects as they pass by Ho Chi Minh’s preserved body within a glass case in a darkened room.

Even if you decide to skip seeing him laying in State, the sight of the Mausoleum is very impressive but if you do decide to file past his preserved body then it’s not grisly in any way, just peaceful, atmospheric and respectful.

Annabel was fine viewing Ho Chi Minh and we talked about it afterwards in case there was anything she needed to express.

After visiting the mausoleum you can continue your visit with the Ho Chi Minh Museum.

Dedicated to the life of Uncle Ho the museum contains accounts of his life and personal effects.

We really enjoyed our visit to the mausoleum.

The wait in line is long, so get there early and be prepared to hand over bags and cameras as you can’t take them in with you.

It’s an honour to see how much Ho Chi Minh meant and still means to the Vietnamese who come here in their thousands to pay their respects.

The museum is very informative and gives a great insight into the man and his life. 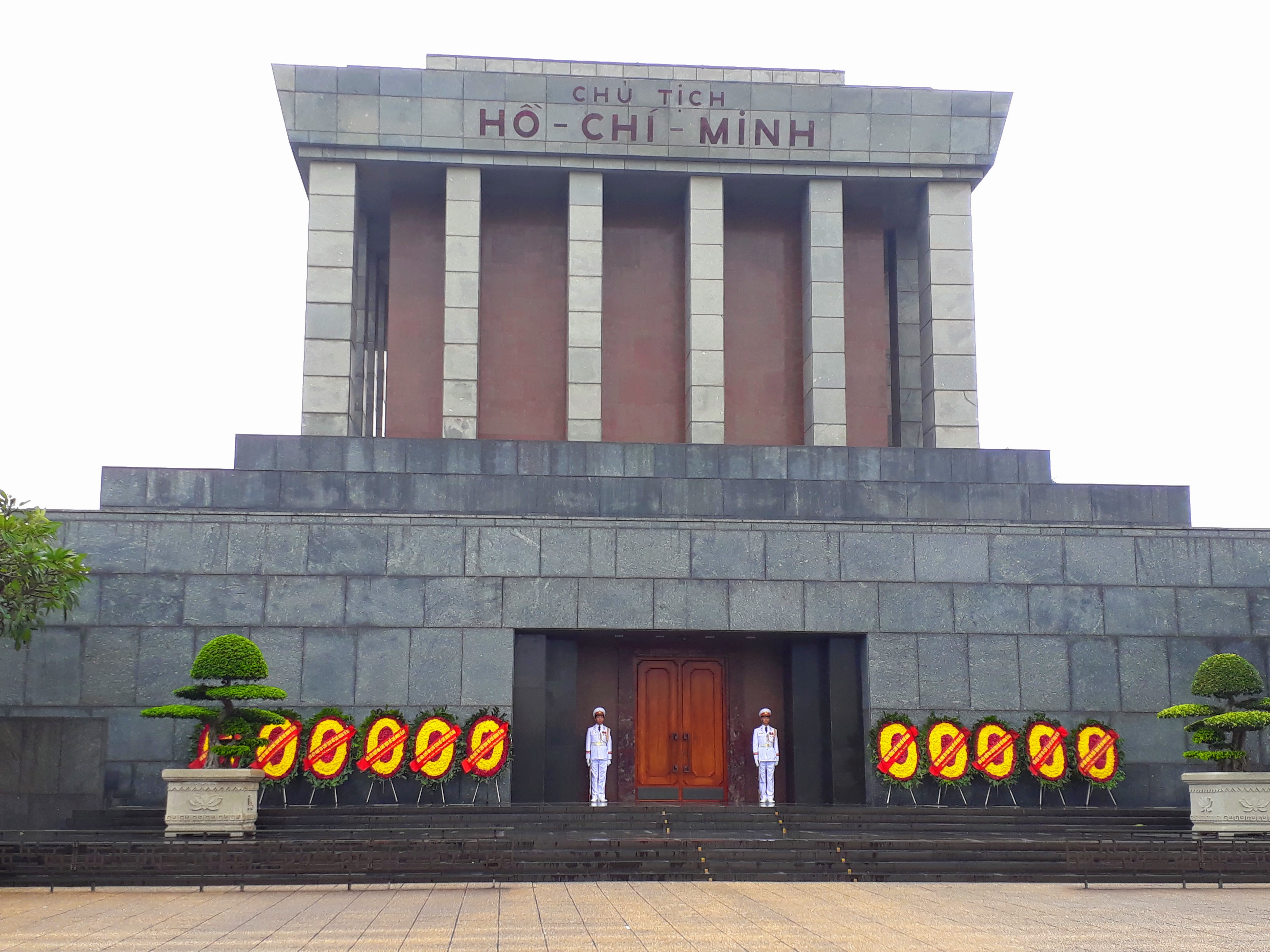 Not strictly in Hanoi but approx 3 hours drive away you will find the beautiful Halong Bay with its limestone karsts jutting out of the waters of the Gulf Of Tonkin.

You can read in more detail about our Halong Bay cruise.

Halong Bay has changed a lot since we visited over twenty years ago ( and not for the better ) but a visit here is still a great thing to add to your list of things to do in Hanoi.

The landscape is magical as you pass monolithic limestone rock formations on a cruise around the bay.

It can be done as a day trip from Hanoi but we chose to overnight on a boat in the bay for a more leisurely trip.

Hundreds of boats now sail the waters but once you’re out on the ocean you’ll soon forget about the other vessels as you wonder at the amazing landscape.

Taking a longer trip allows you to discover some of the islands, go kayaking or cave exploring.

It’s changed greatly and mass tourism has arrived so it’s not what it used to be but we all loved our time on the boat cruising around the islands with the fantastic scenery to watch and wonder at.

Be careful what cruise you choose as some boats are really just party boats for young people to let their hair down and if that’s what you’re after then great otherwise research the cruises to find the best fit for you. 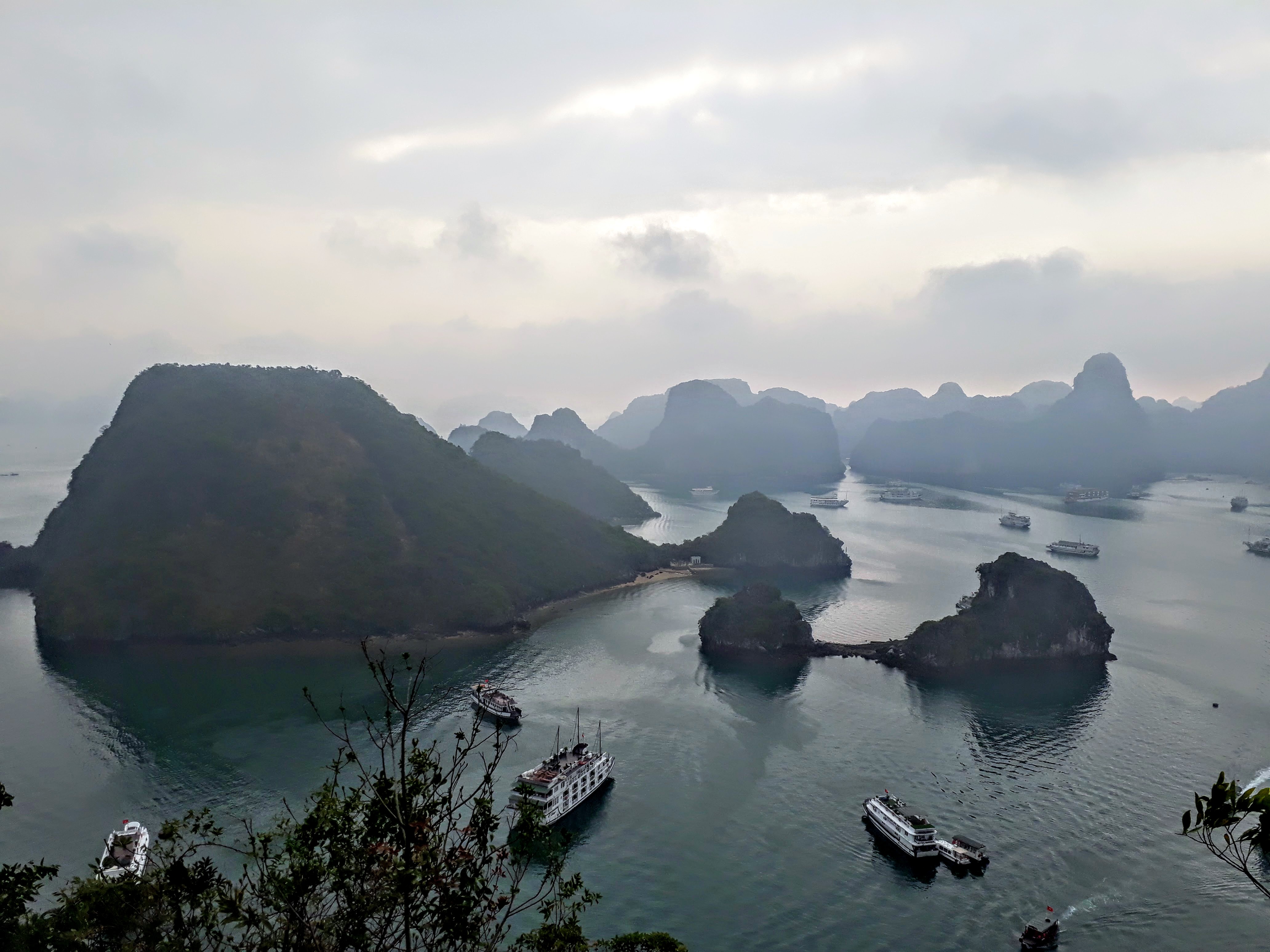 Hanoi is famous for its unique egg coffee. It may sound a bit gross but take our word for it, that it’s actually delicious.

Check out our post on Hanoi Egg Coffee, the best place to drink it, a bit of history about it and what it’s like.

Go to Giang’s Cafe for the best Egg Coffee in Hanoi.

Don’t take our word for it. Locals have been coming to Giang’s since 1946 when the owner invented the drink. 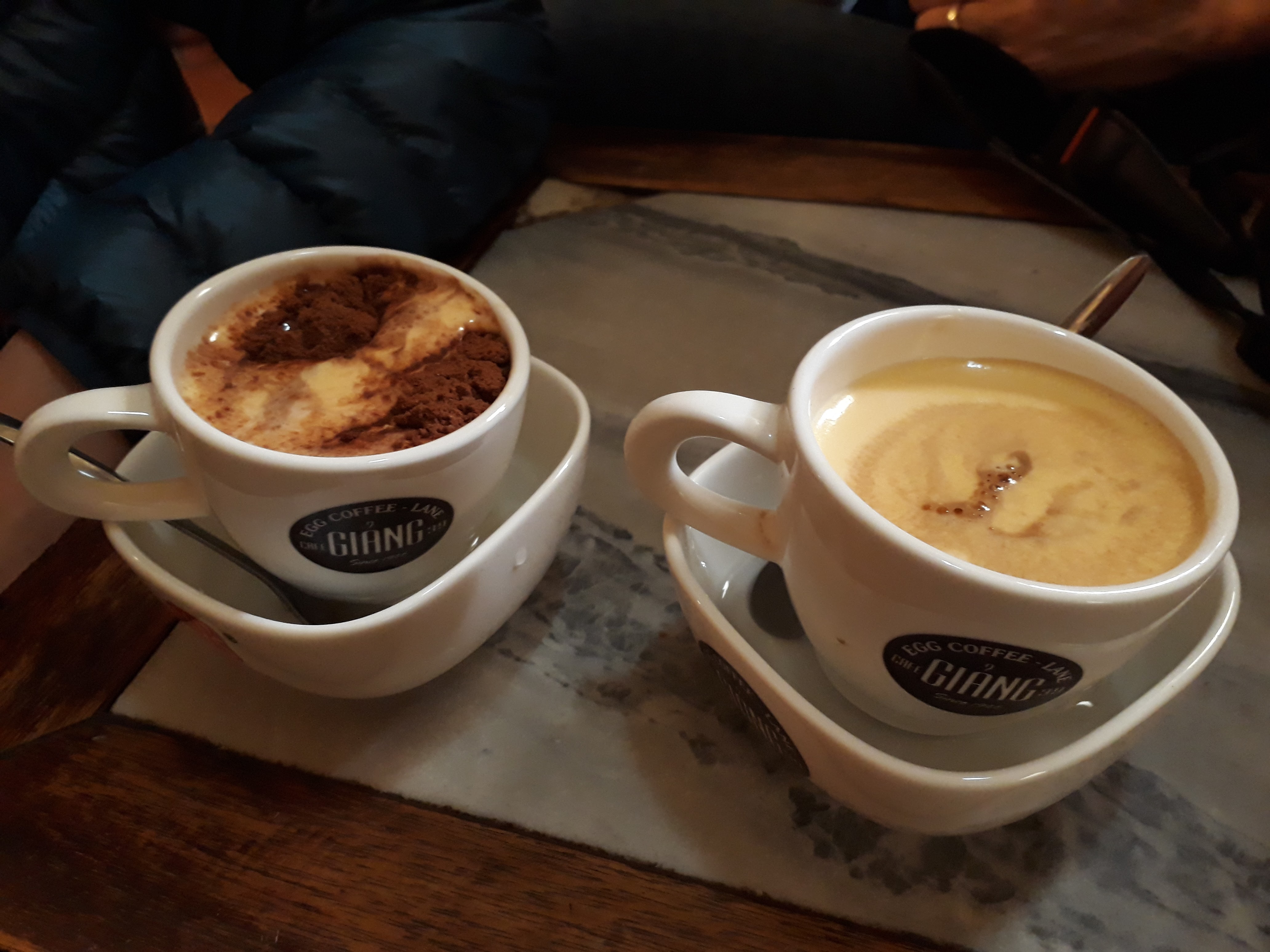 5. Watch A Performance At The Thang Long Water Puppet Theatre

It’s very popular so you’ll probably need to book ahead to get a seat at one of the four daily shows.

We were able to get tickets for a performance the following day from the box office at the theatre.

Once you enter you’ll find a pretty average auditorium with the main difference being a large pool of water where the stage normally is, surrounded by scenery.

As the lights go down the pool is lit and puppet characters appear from behind a curtain at the rear of the pool to act out different traditional Vietnamese folklore stories.

It’s very cleverly done with all the mechanism hidden below the pool of water as the puppets dance around in the pool.

Musicians play traditional music and sing from their perch to one side stage.

It’s a great way to discover the tradition of water puppetry and be able to hear traditional Vietnamese music and singing.

We loved the more lively stories as some of them can be a bit dull.

Overall it’s a great experience especially if you have children with you.

The Women’s museum is one of those places you don’t hear much about and it’s not usually on the various lists of attractions but we really enjoyed our visit there.

It’s the type of place that you think will be a quick visit but actually, there is loads to see.

It’s a celebration of women in the Vietnamese culture with exhibits about their role within village life, their role in the various conflicts Vietnam has been involved in and city life.

In fact, there is too much there to be able to list so you’ll just have to go and check it out yourself on your next visit to Hanoi.

The Women’s Museum was a really nice surprise.

All three of us enjoyed it and it gave Annabel as well as us an educational experience into the lives of women in Vietnam, past and present. 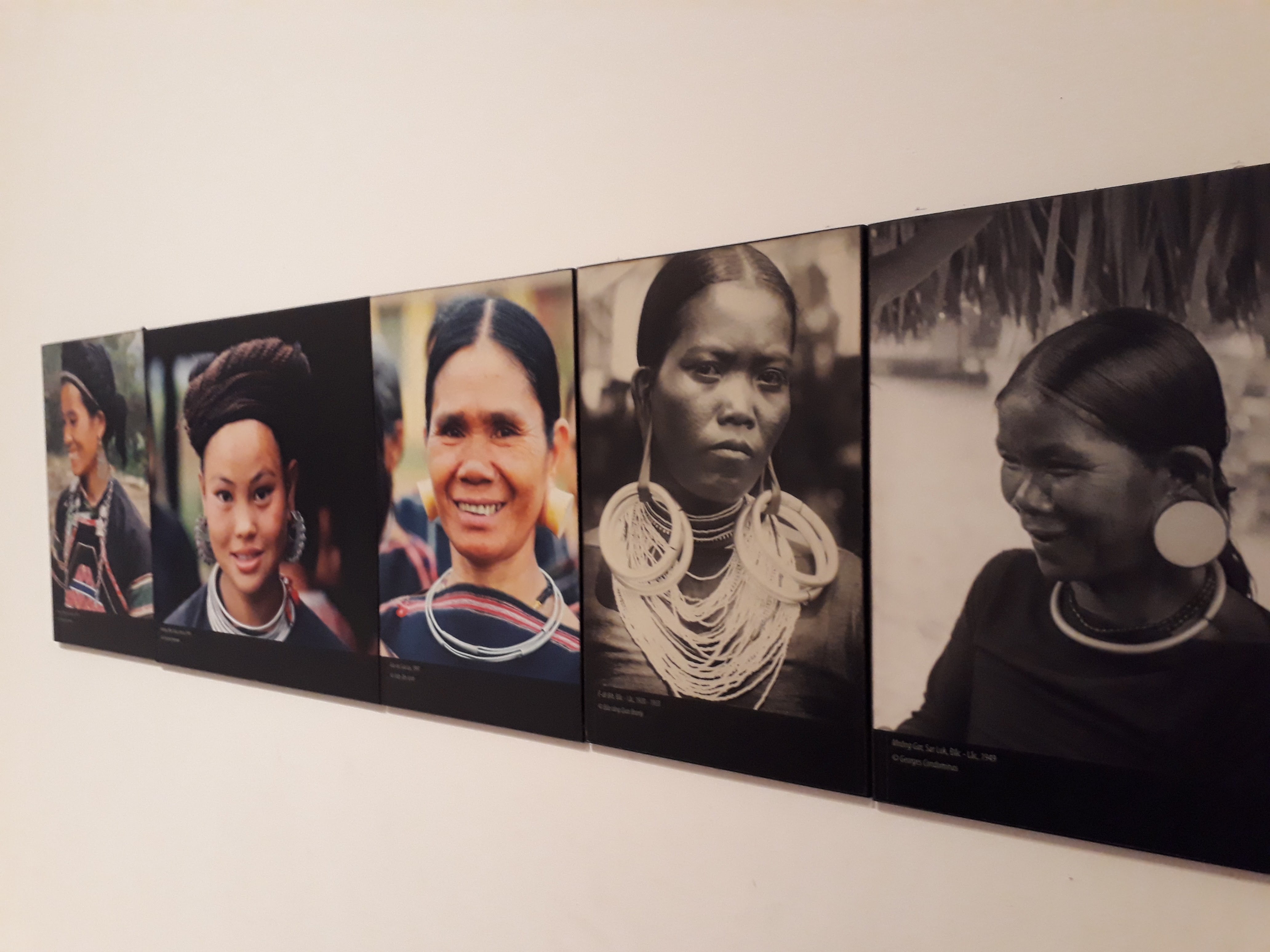 7. Take A Walk Around The Old Quarter

Sometimes the easiest and simplest ideas are the best ( and budget-friendly ) so why not just take some time to get lost in the Old Quarter streets.

The maze of streets offers a bargain shopping experience or just the chance to wander and see everyday life on these busy streets.

Chinese fakes are the order of the day with outdoor gear and all sort of merchandise being available.

See the old quarter as an experience in itself rather than just an area to pass through.

You’ll discover tiny cafes as well as some of the best food Hanoi has to offer in its simple eateries.

If you fancy a break from the chaos of the old quarter, Hoan Kiem Lake is a short walk away offering some peace and quiet and a lovely stroll around its banks.

We love to just wander the streets of the old quarter and gaze up at the old French colonial buildings.

It’s vibrant and colourful but keep your eyes wide open in the moped filled streets as it’s easy to come a cropper. 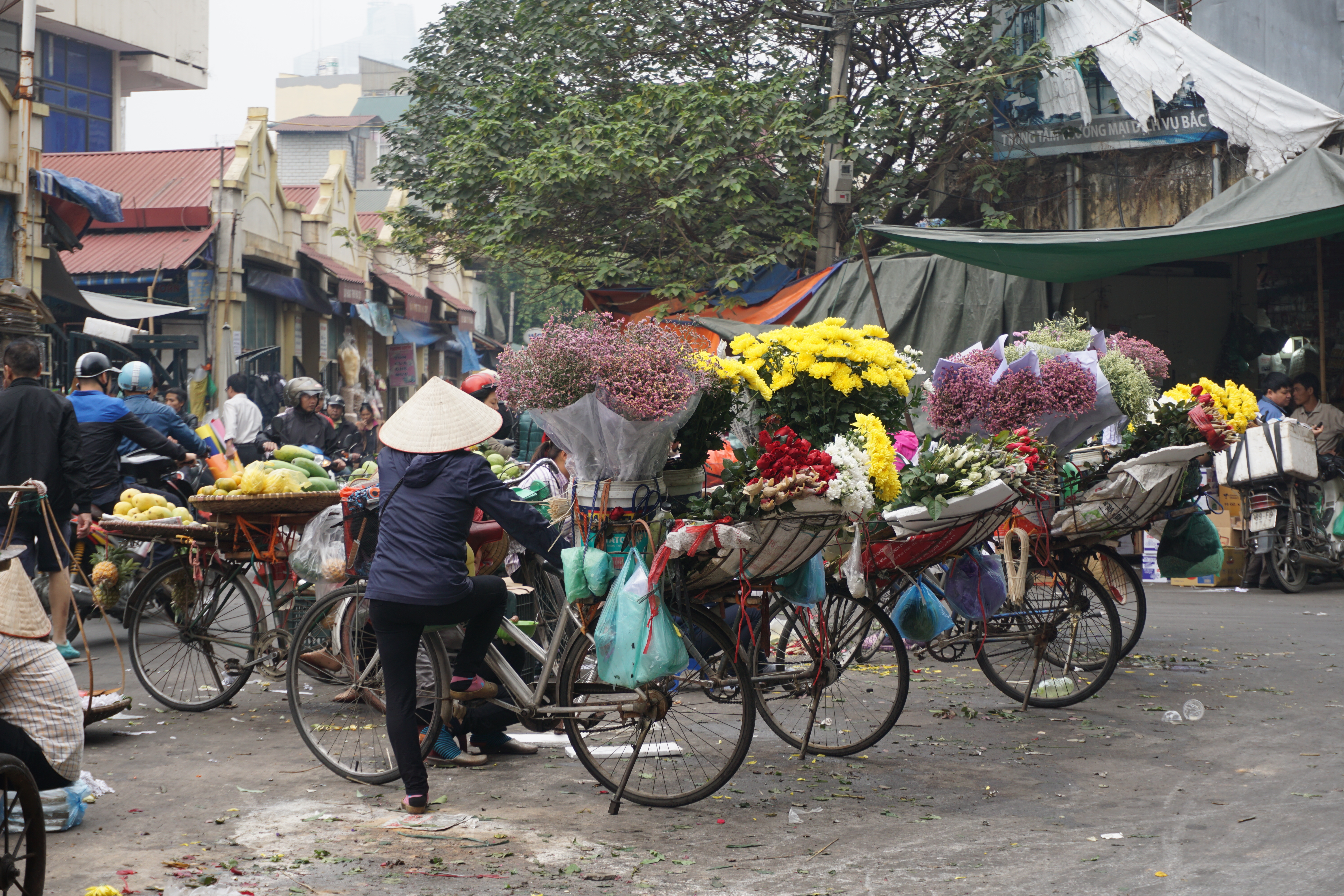 Hidden away amongst the streets of Hanoi you’ll find the most amazing community that live with a railway line directly outside their front doors.

Children play and life goes on as normal on the street until just before the twice a day train is due and the residents and children disappear from sight and anything left on the street gets taken in.

We were unlucky when we visited as the train was cancelled but normally as the train rumbles through the street there is literally no breathing space between the houses and the train.

Residents here have adapted to their close proximity to the railway.

We may have been unlucky not to see the train but it was pretty amazing to see this narrowest of streets and life going on with the train track only inches away from the houses.

You can walk the line but just be aware of any trains due. If you suddenly find yourself the only one on the street, it may be time to leave pretty quickly. 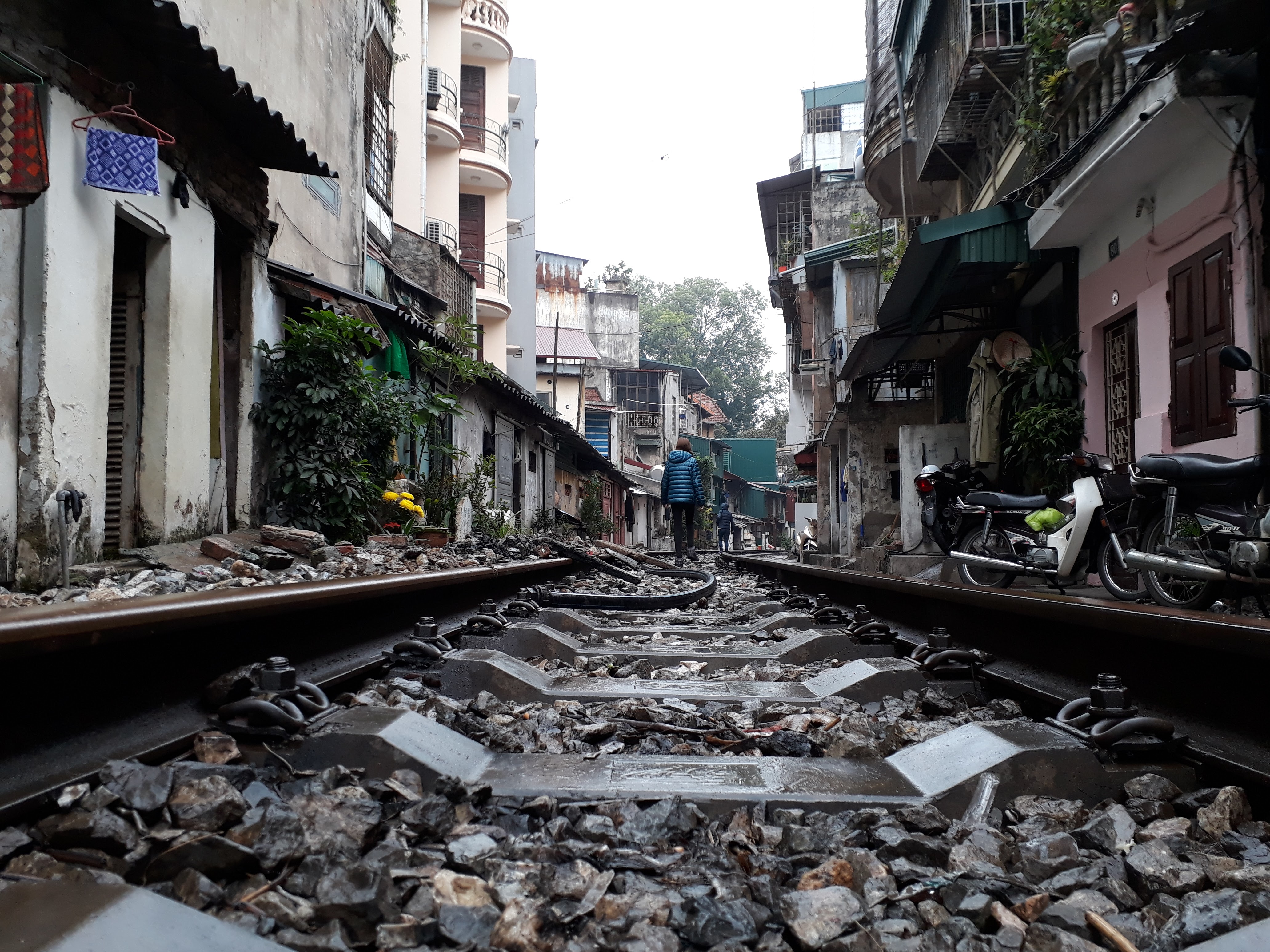 It’s your lucky day. You get a bonus Hanoi tip.

We found a restaurant that had really good reviews so we went searching in the Old Quarter for it.

It’s called New Day Restaurant and boy is it good!!

So good in fact that we ate there for every meal we had while in Hanoi.

It gets busy but we managed to get a table each time we visited.

The food is divine, fresh and not filled with MSG like other places around Hanoi.

The portions are big and it’s extremely inexpensive and good value. 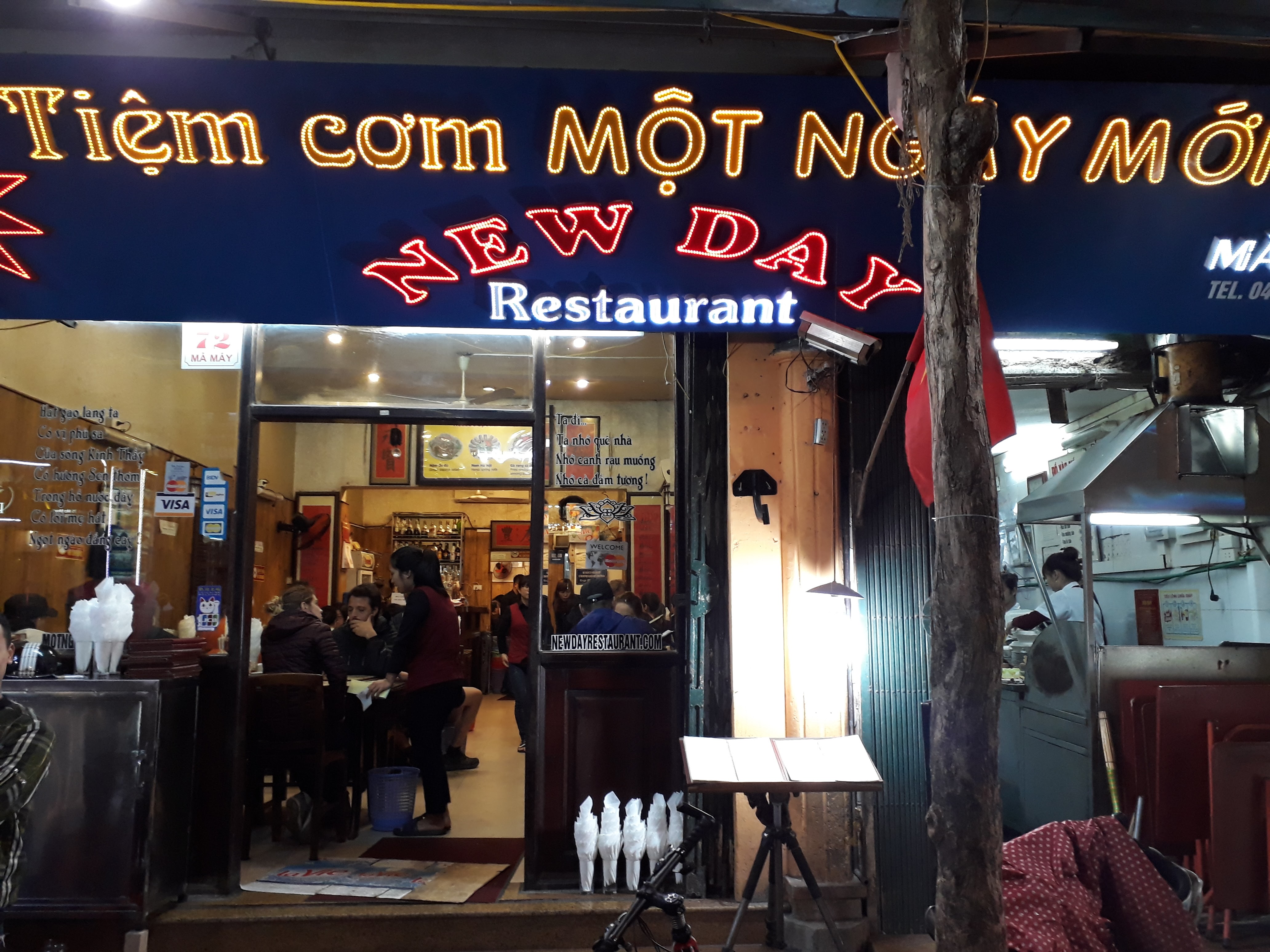 The Fantastic New Day Restaurant In The Old Quarter

You Can Discover More About Our Adventures In Vietnam Here