Our Guide To The Oregon Trail Interpretive Center

Not only will you learn all about the endeavours of all who travelled the trail but you can also view the original Trail ruts that have left their mark on the landscape. 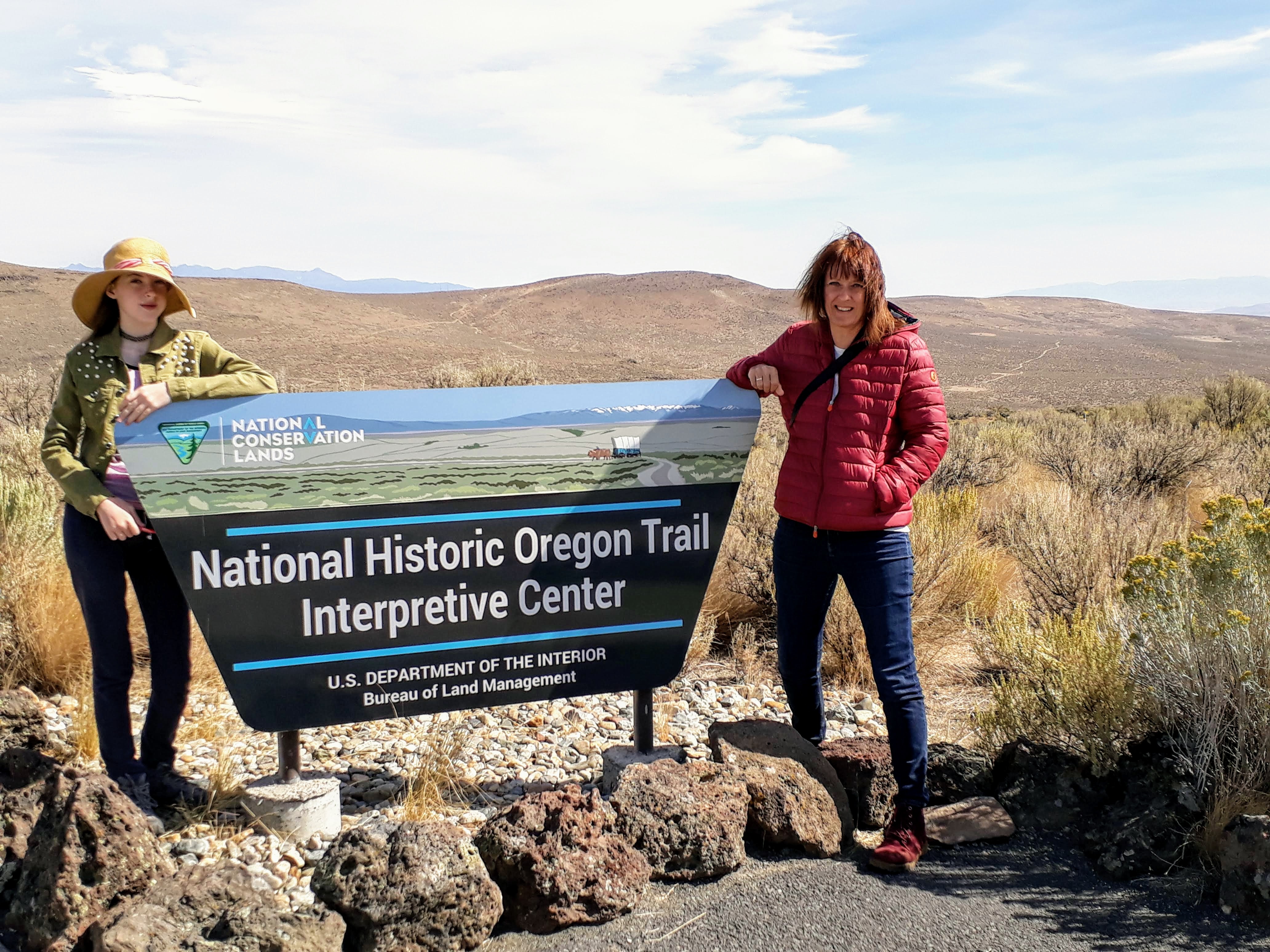 From 1840 through to the 1880s over 350,000 emigrants moved West along what became known as the Oregon Trail from starting points in Missouri 2000 miles away.

Settlers from all over the eastern USA and from abroad had to make their way to the beginning of the trail before taking on the six-month ordeal of navigating the Oregon Trail.

Sitting on a hilltop overlooking miles and miles of empty wilderness the Oregon Trail Interpretive Center recreates the stories and living conditions of those first settlers trying to make their way West along the trail. 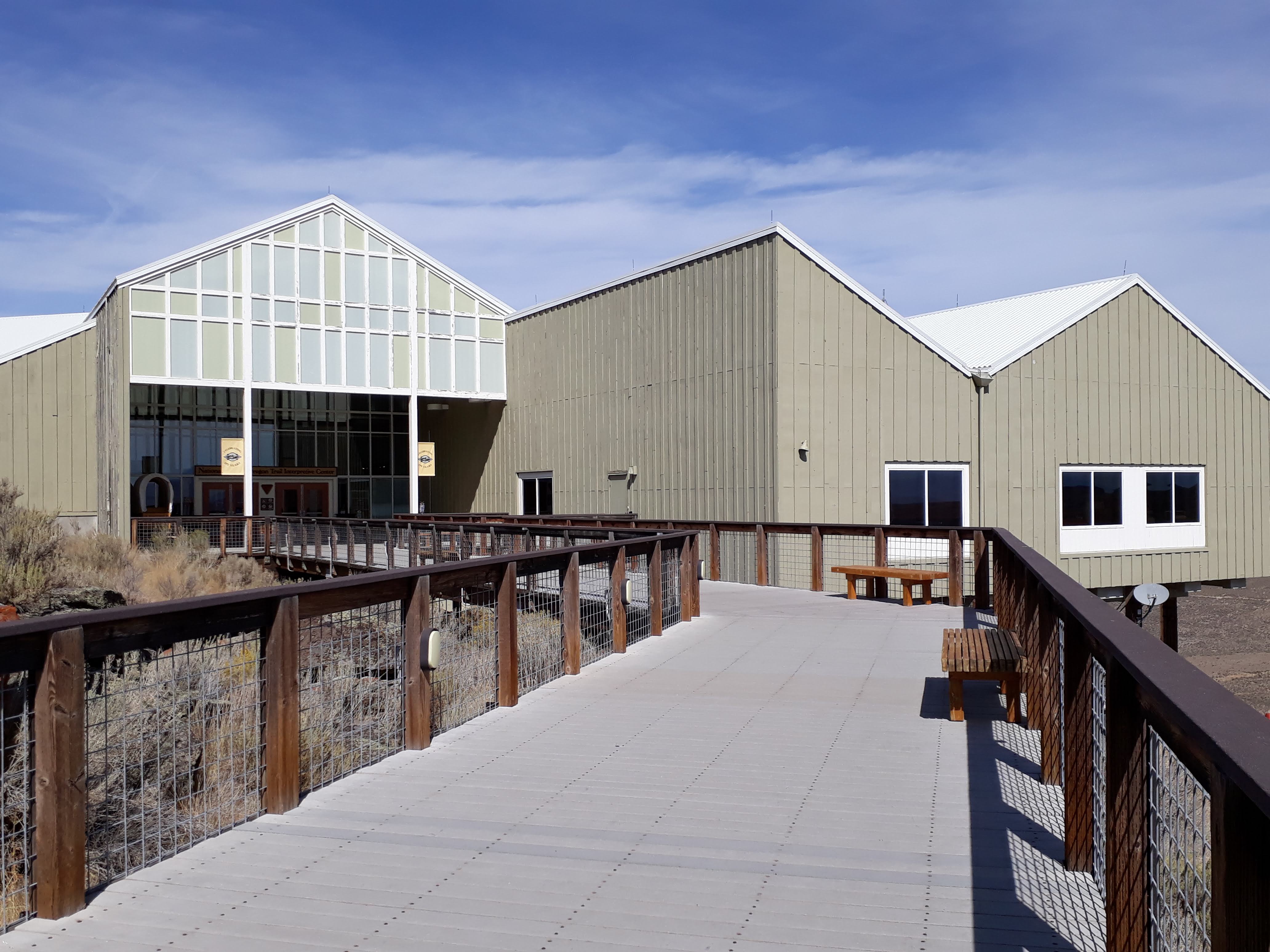 Before they set out on their gruelling journeys, families arriving at the starting point of the trail would need to purchase everything they needed for their time on the road.

Already poor from the depression in the Eastern States, whole families arrived needing to buy wagons and livestock to pull them.

Many didn’t know or have enough money to buy the proper items necessary for the trip and there were always dubious people ready to sell the naive settlers less than perfect supplies.

Most of them also bought with them everything they owned including furniture, with little idea of how they would be able to carry all of it with them across the country. 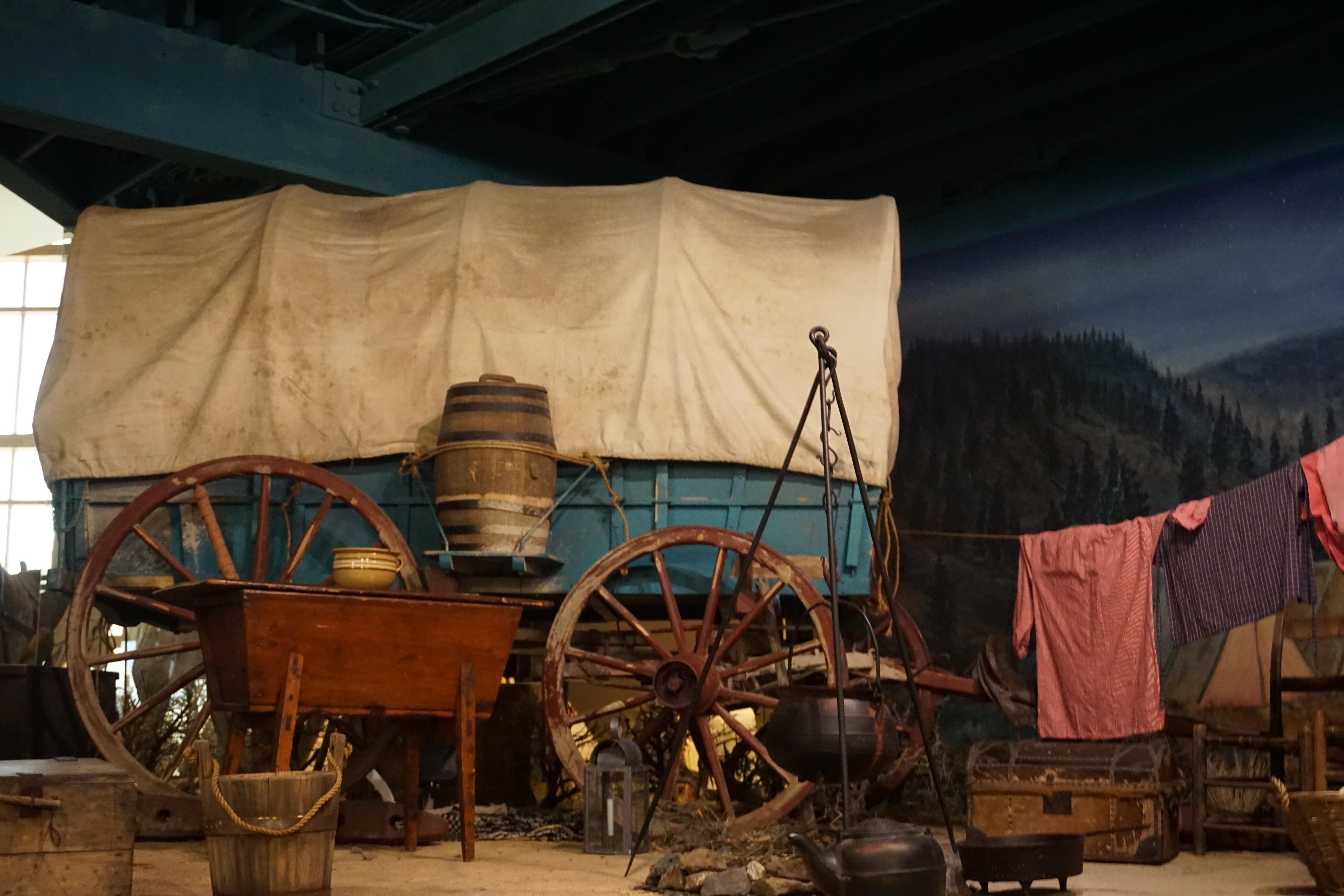 Settlers had little idea of what to expect out on the trail although there was a guide book published that outlined the route and what was needed.

Some even set out pulling carts by hand with all their supplies loaded aboard for the journey across six states.

Conditions on the trail were harsh, to say the least.

Weather and illness took its toll on the settlers and their livestock.

Some lost their wagons and all their belongings trying to cross mighty rivers and some lost more, sacrificing their lives to push on West. 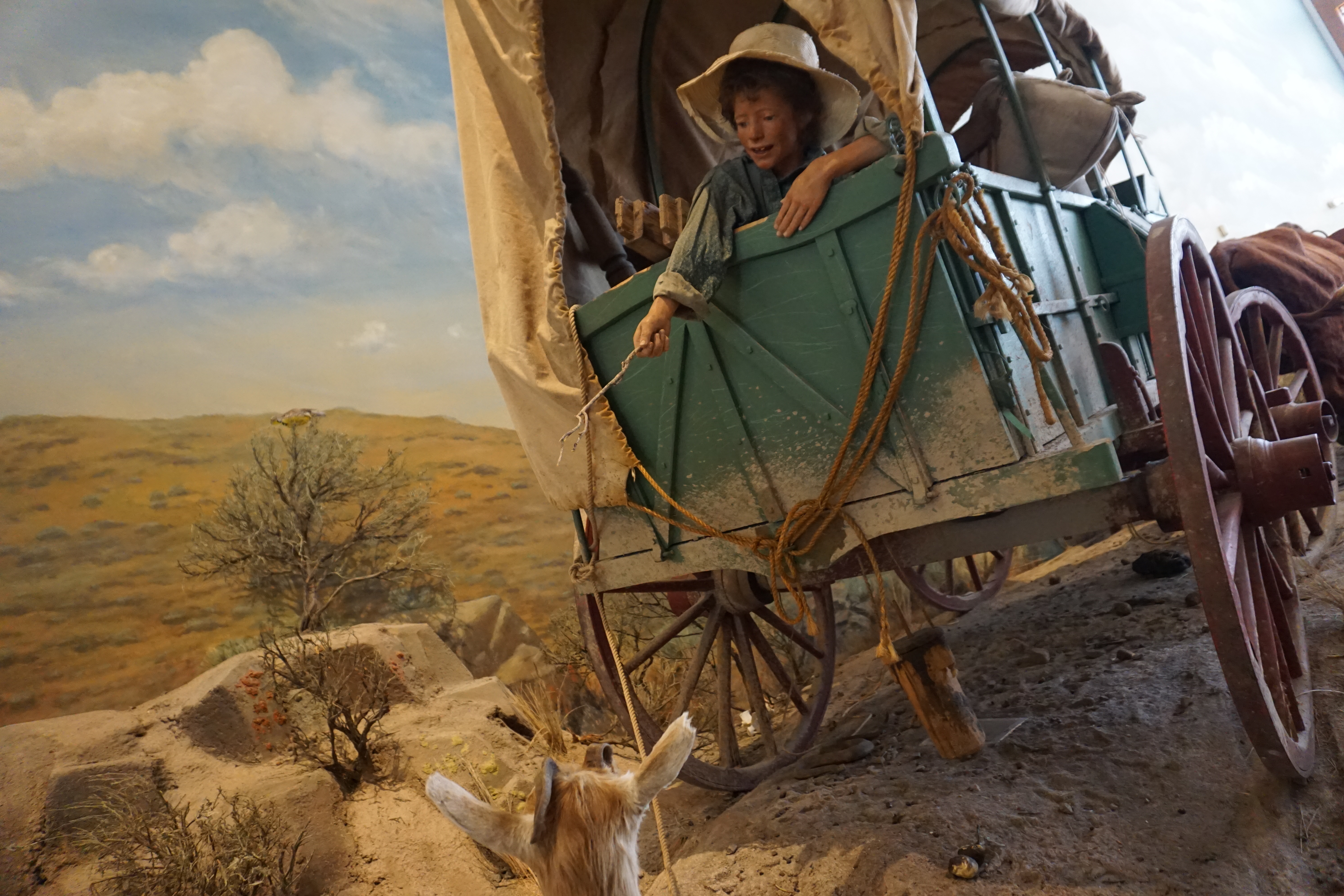 One Of The Centers Displays

The old photos and personal accounts in the Oregon Trail Interpretive Center give you a glimpse of what the settlers making the journey had to endure but no one can really understand how difficult it was except the people who did it.

The trail soon became littered with discarded belongings that the settlers couldn’t carry any further, as well as dead oxen and mules, that couldn’t survive the harsh weather and conditions.

Grave markers dotted the trail as families lost members due to accident and illness.

The old being especially susceptible to the hardships of the journey. 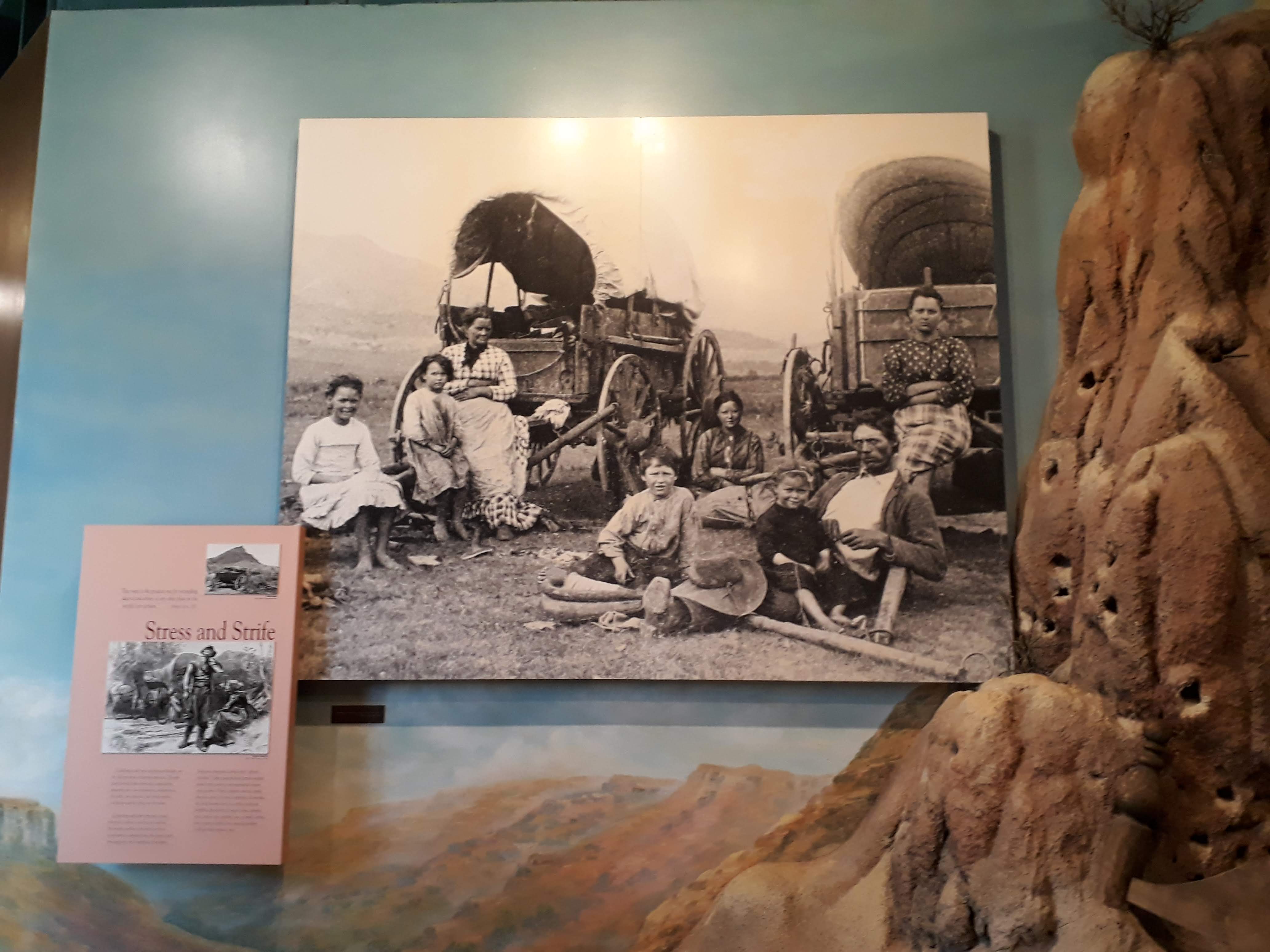 A Photo Of Emigrants On The Trail

Settlers had to move further and further away from the trail to find good grazing and water for their animals.

Instead of one trail, several side trails opened up giving the emigrants a choice of routes in some areas although there was rarely an easy option.

In some areas, the trail could be twenty miles wide and in other places just the width of one wagon. 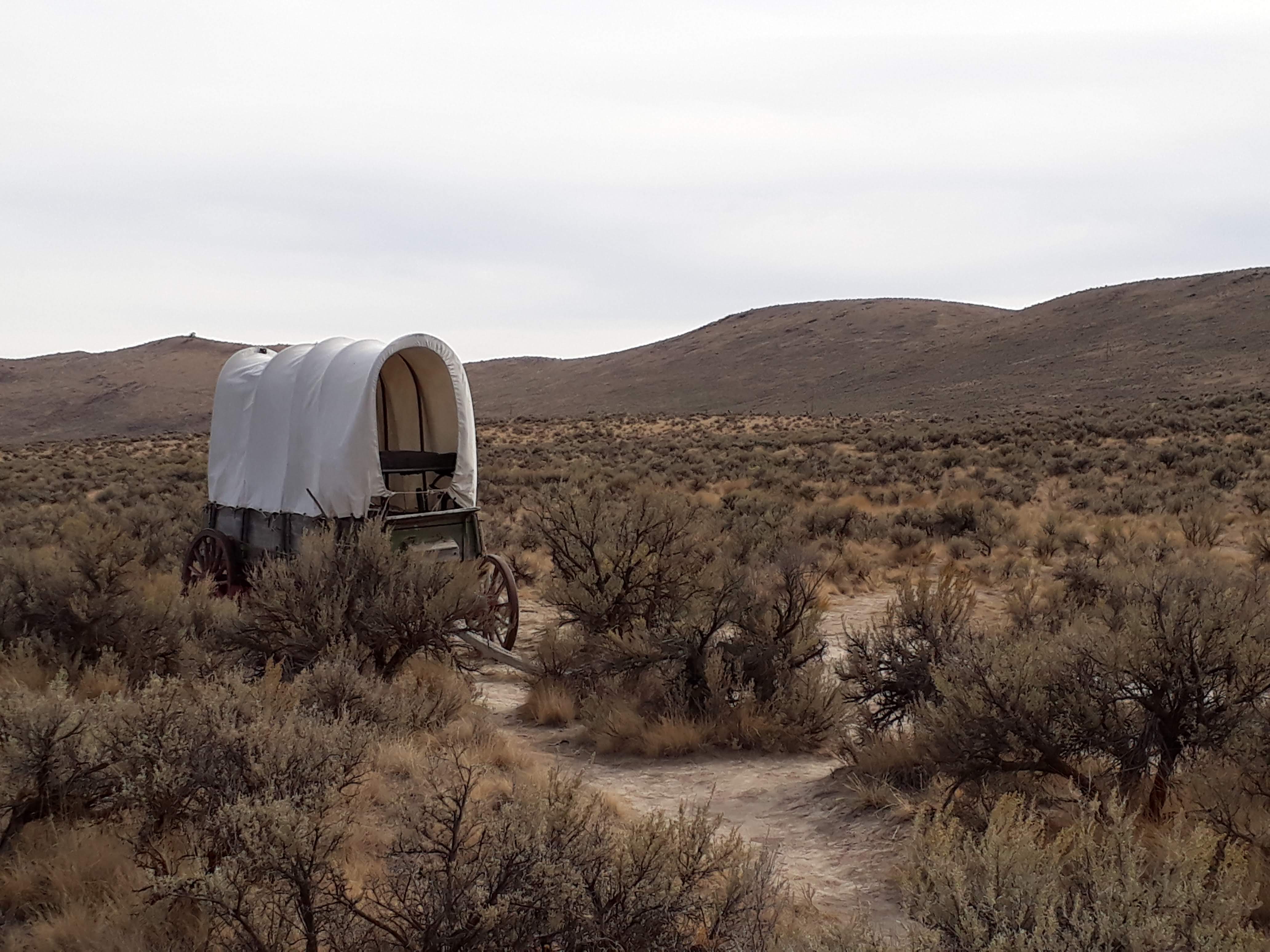 A Settlers Wagon Out On The Prairie

You can also get to the ruts from the car park by the side of the road leading to the Interpretive Center.

Through all six states that the trail crossed, wagon ruts can still be seen.

The passing of hundreds of thousands of wagons has left its make on the land.

It’s pretty cool to see the ruts, a pair of ruts where the wagon wheels have worn the ground away.

You really get a sense of the settlers passing through the area and the conditions they would have faced in the exposed prairie and the Blue Mountains.

You can follow the ruts for over a mile on the grounds of the center. 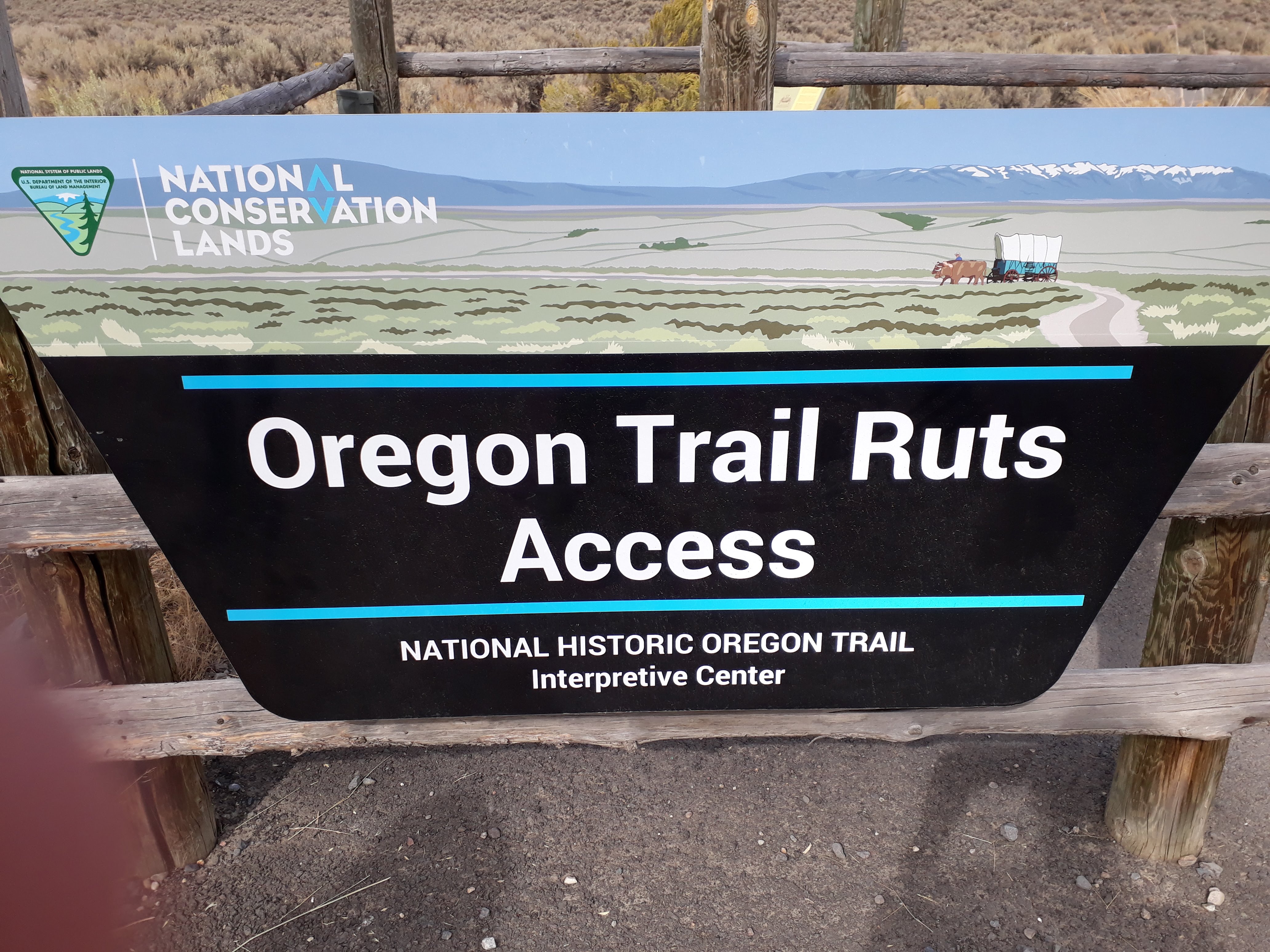 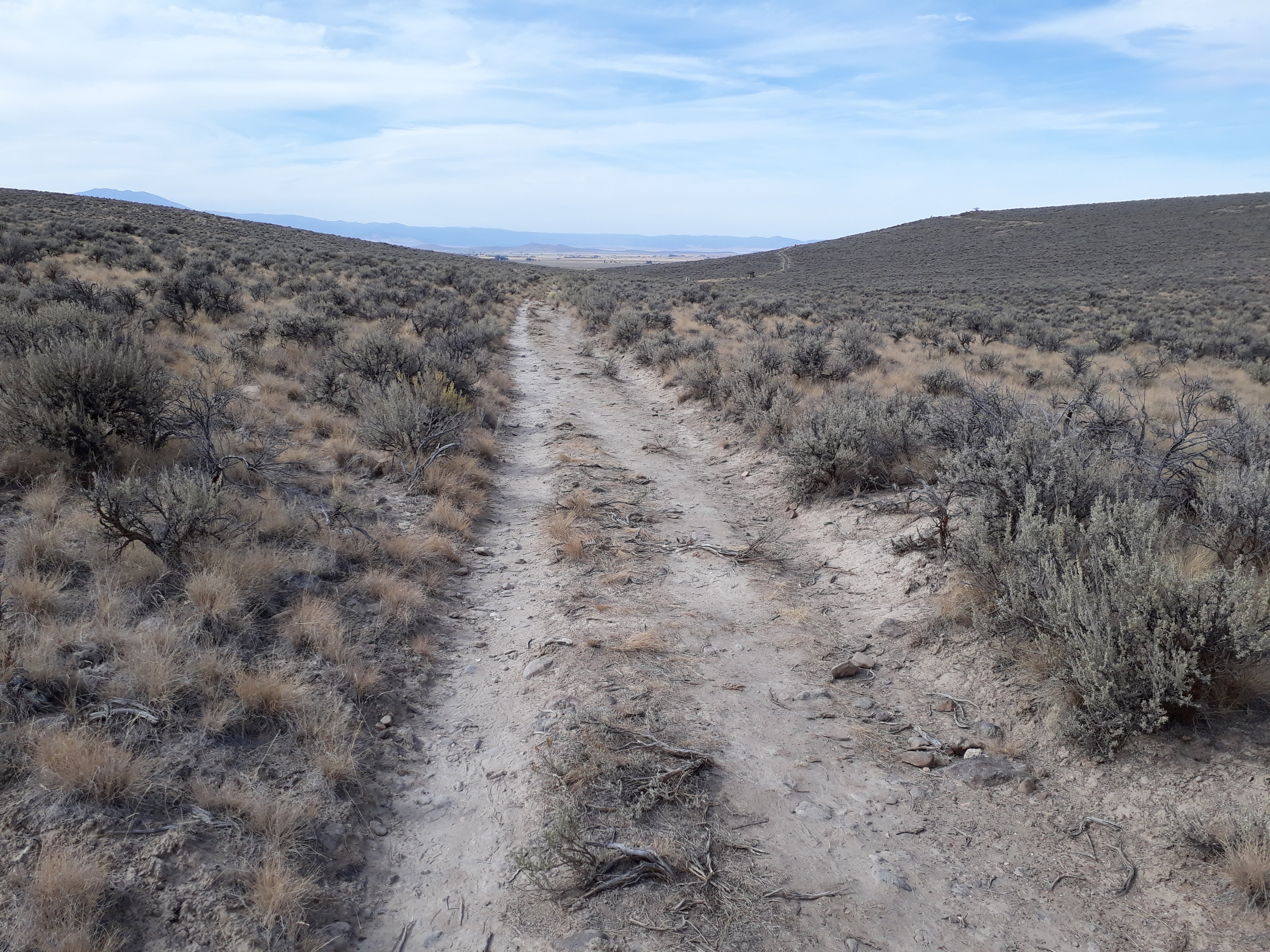 The Trail Ruts That Run Through The Landscape

Outside the Oregon Trail Interpretive Center you can see a group of wagons placed in a circle.

Although not originals they do give you an idea of what it might have been like to be in a settlers encampment along the trail.

There’s also a wagon down by the trail ruts that you can climb aboard. 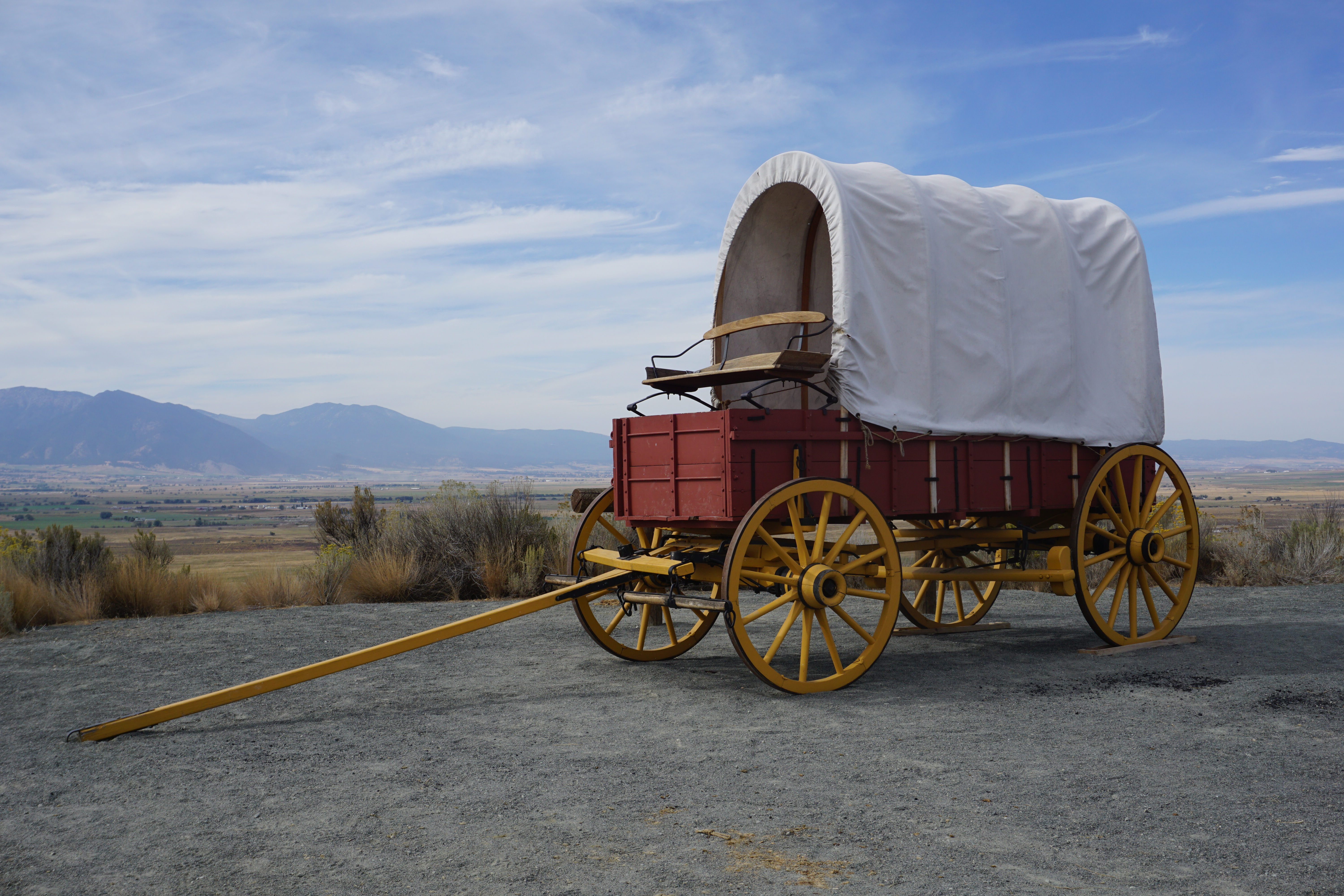 One Of The Wagons That Are Outside The Center

After their long and dangerous journey through Missouri, Kansas, Nebraska, Wyoming, Idaho and Oregon settlers made homes and farms in this new and prosperous land.

Some didn’t finish their journey in Oregon as many decided to try their luck at gold prospecting in the gold fields of California to the South.

The others decided to return to the East as the trail was too difficult or they headed off in different directions from the trail.

Many found a home in Salt Lake City in the Mormon community relocated there from Nebraska.

Accurate numbers are difficult to find but it’s thought that about 10% of the settlers died en route from accidents and disease outbreaks such as Cholera.

The Oregon Trail journey represents the largest and longest migration of families in Americas Westward expansion. 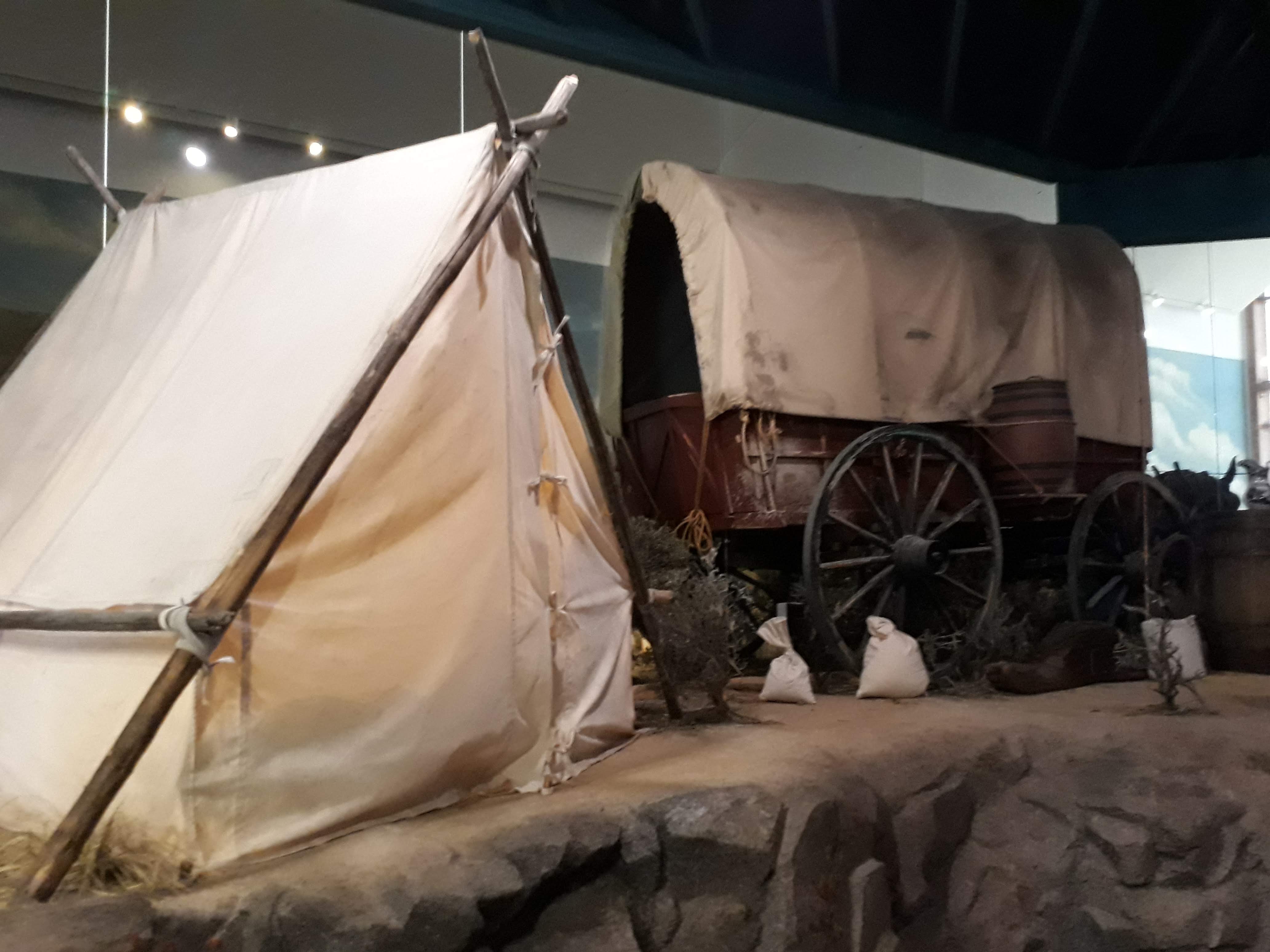 A Display Of A Typical Settlers Camp

The center has some great displays and gave us a great background into the story of the people who gave up everything in search of a new beginning.

The center is well laid out and we also loved the outside trails to explore.

Walking around the trail ruts brought it all to life as we imagined the wagons rolling through.

You get a real feel for the conditions on the trail as the center is pretty much in the middle of nowhere with dry prairie and hills all around.

We recommend a visit if you pass this way to get an idea of what those early settlers endured to make a new life in the West. 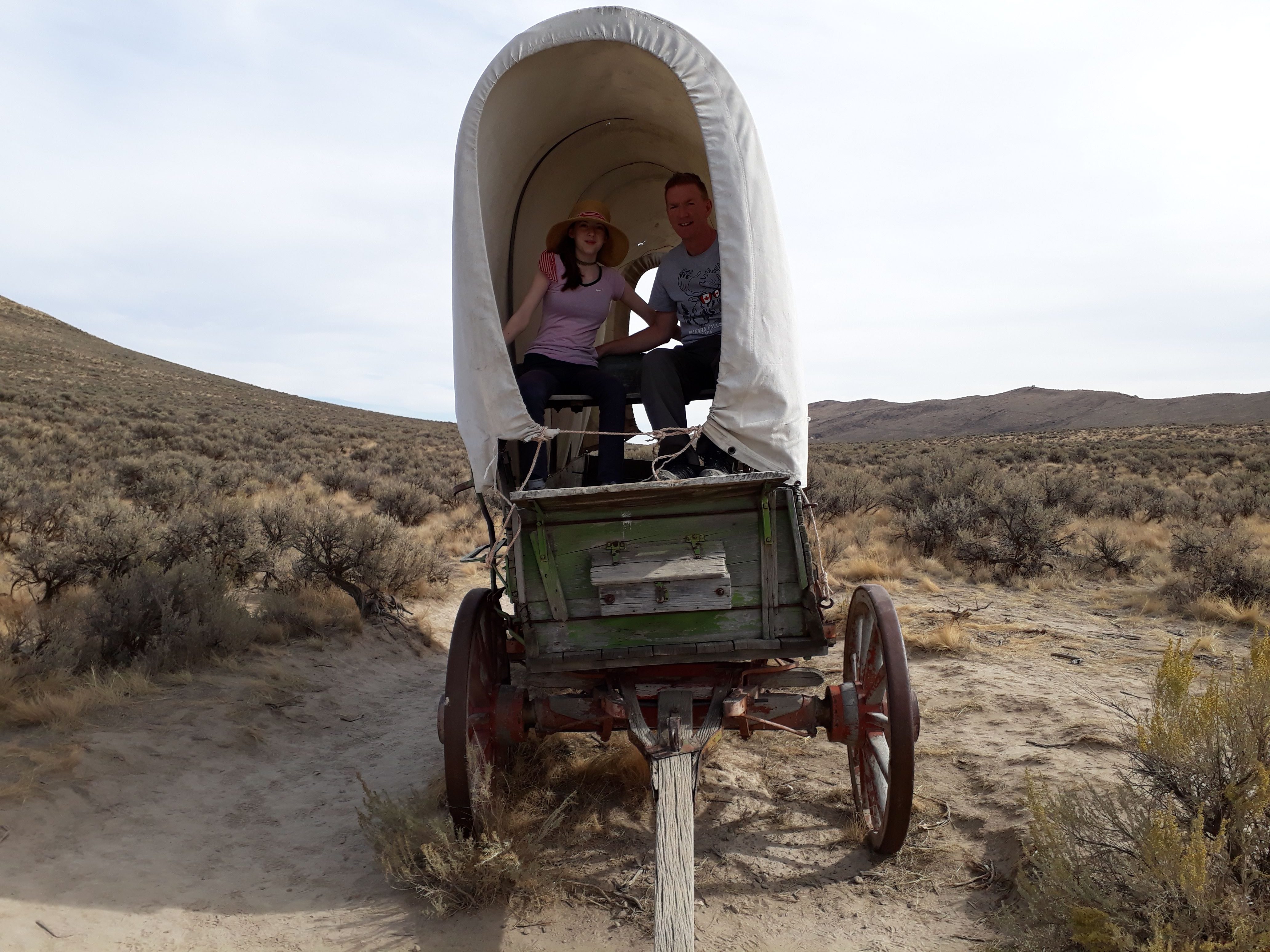 Imagining Life On The Oregon Trail