Hiking in Olympic National Forest is a magical experience.

With mountains, old growth forests, streams, waterfall and ocean, it’s one of the most varied destinations we’ve ever hiked in.

Even though the national park is surrounded by the national forest and the boundaries are blurred between the two, there are different entry requirements for both.

We loved the fact that the forests trail were so quiet and went all day without seeing another person. 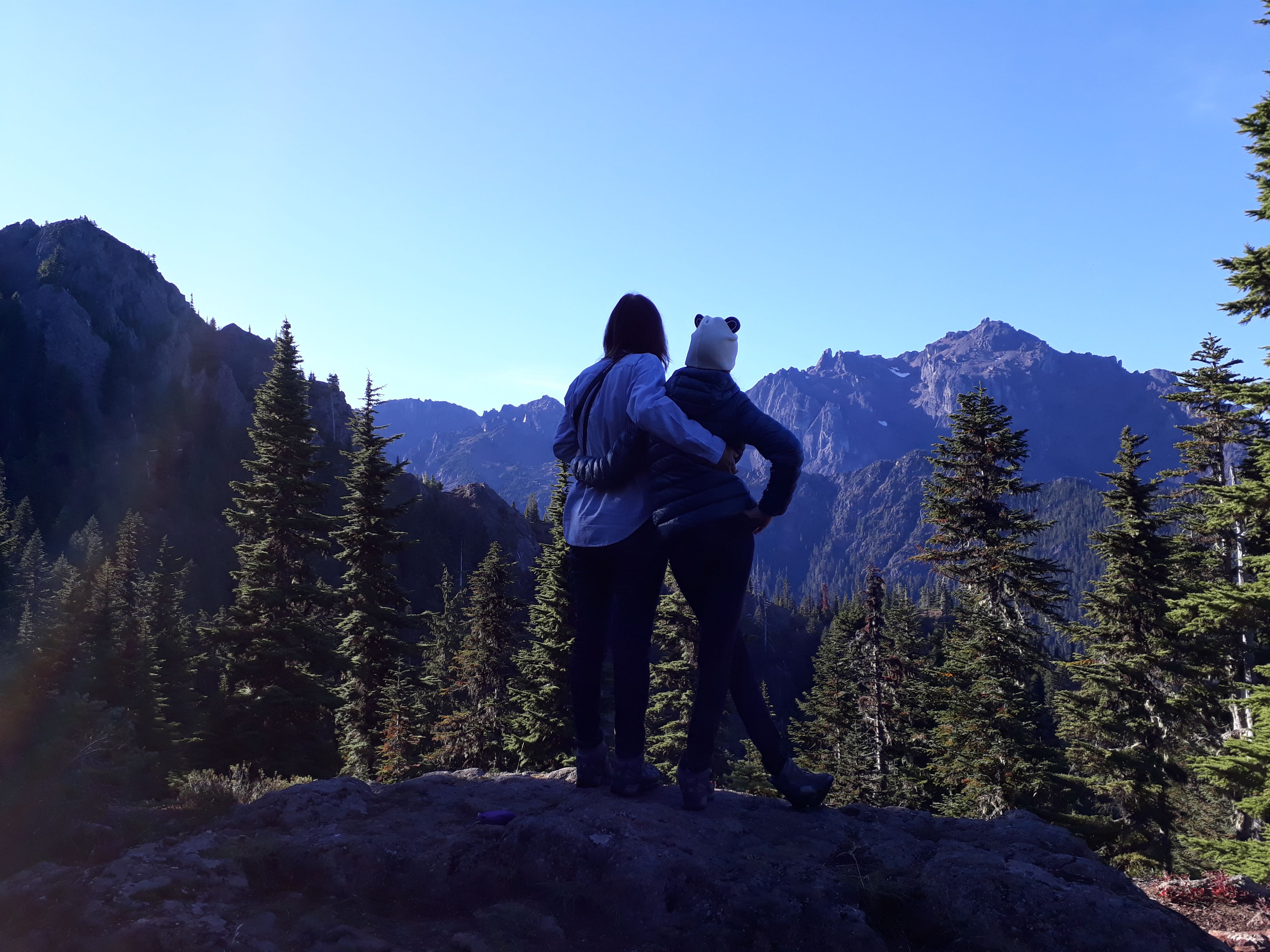 How To Get To Olympic National Forest

It’s most easily accessed from the East and South East which has several wilderness areas to explore.

I’ll explain more about the entry requirements in the nitty-gritty section at the end of this post.

You could base yourself in Port Angeles or somewhere on the Eastern side of the national park like Quilcene.

We came across from Poulsbo where we were house sitting a very cute corgi who came on some of our hikes with us. 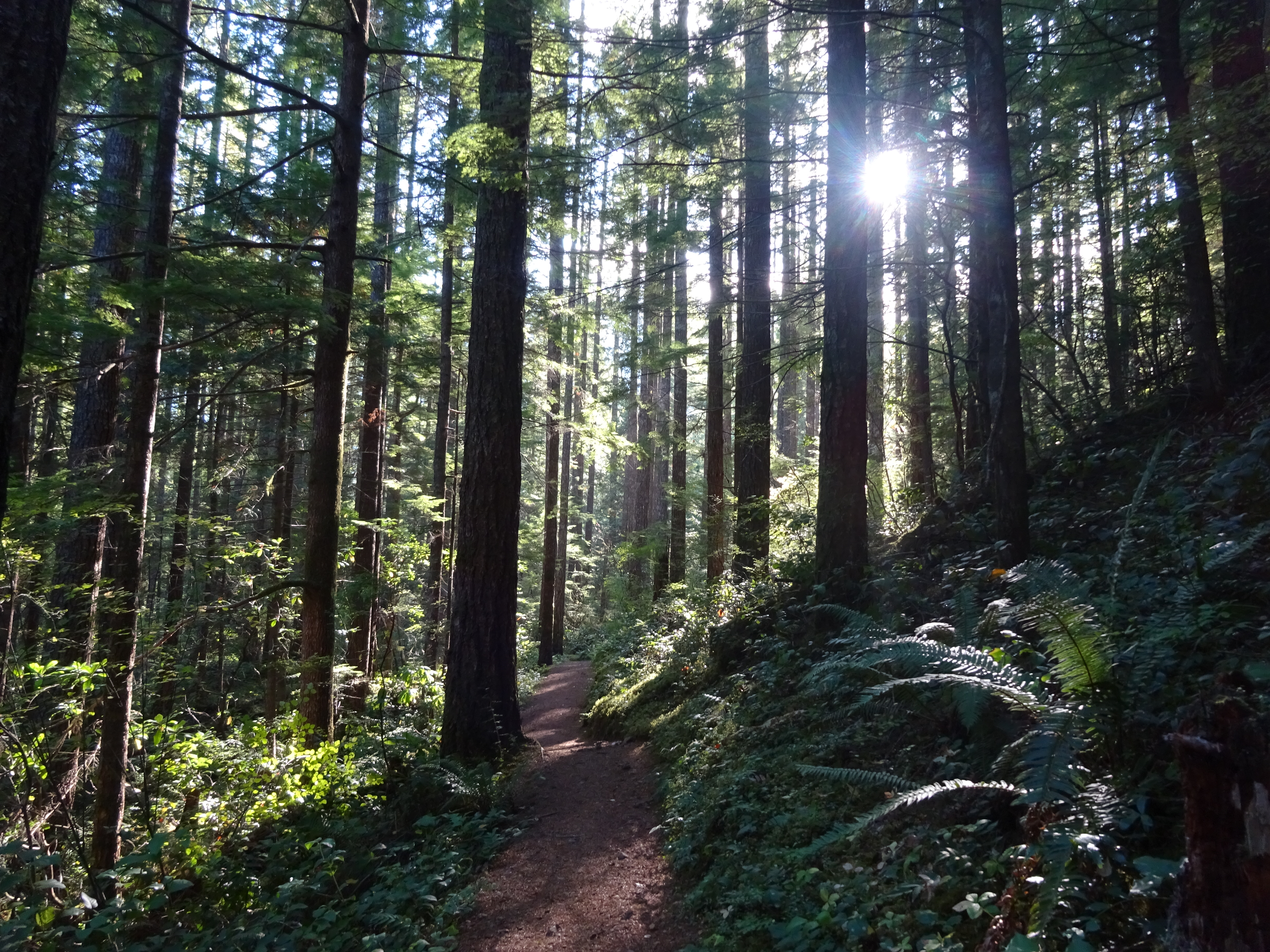 Make Sure To Stop By The Visitor Center

Your first stop before exploring the Olympic National Forest should be the visitor center and ranger station at Quilcene.

A very helpful lady gave us tons of information and suggestions on hikes and things to see in the area.

They also have all the latest hiking conditions and wildlife information, although she did tell us there were no bears in the area which we found out later wasn’t strictly accurate.

Pick up a copy of the Olympic Outlook newspaper that will give lots of information as well as trail details for the forest.

Some of the trailheads can be quite difficult to find along forest roads so ask for detailed directions in the visitor center. 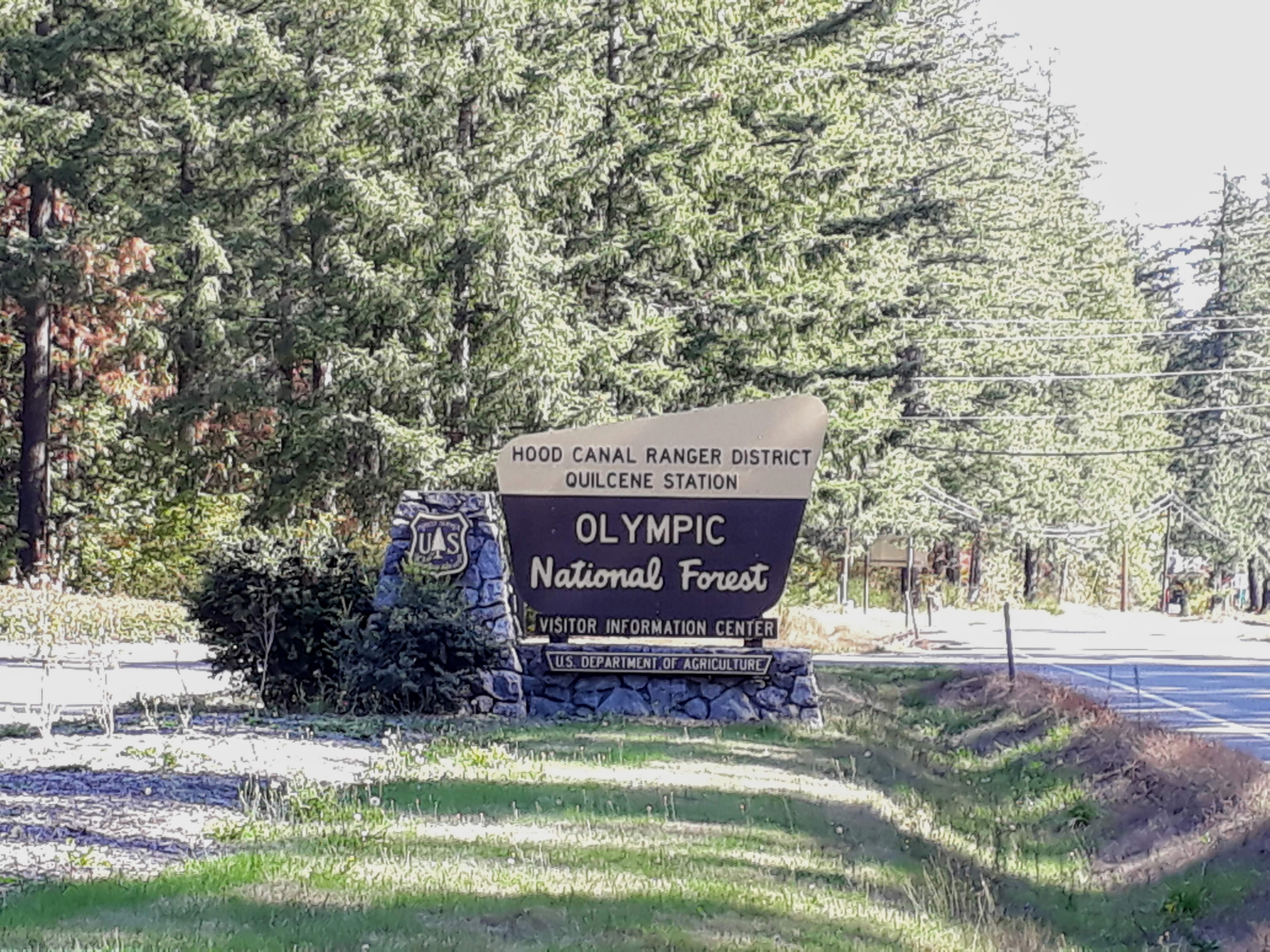 This trail is in the Big Quilcene recreation area.

Even though we had directions from the park ranger we had lots of trouble finding the trailhead for this hike.

This is a dog-friendly trial so we bought along Kebab the corgi we were taking care of.

The Lower Big Quilcene Trail is a 6.2-mile hike one way and follows the Big Quilcene River for some of the way.

This trail led us through old growth forest with tall fir trees on either side of us.

Old growth forests are unique for their damp environment allowing ferns and mosses to grow everywhere.

The forest is so quiet and I think we only saw two people on the trail that day.

We loved that all the trail was maintained and marked really well. 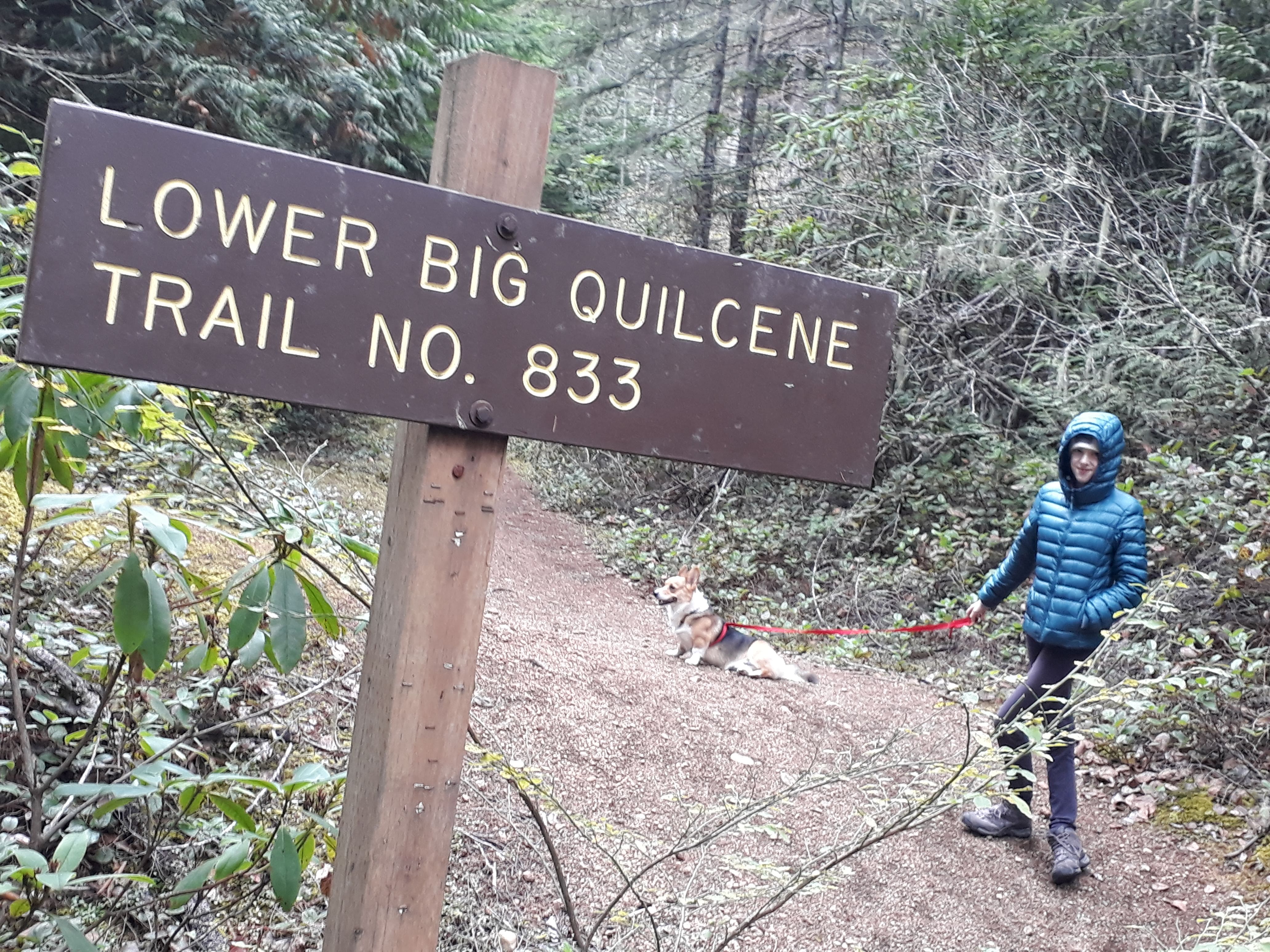 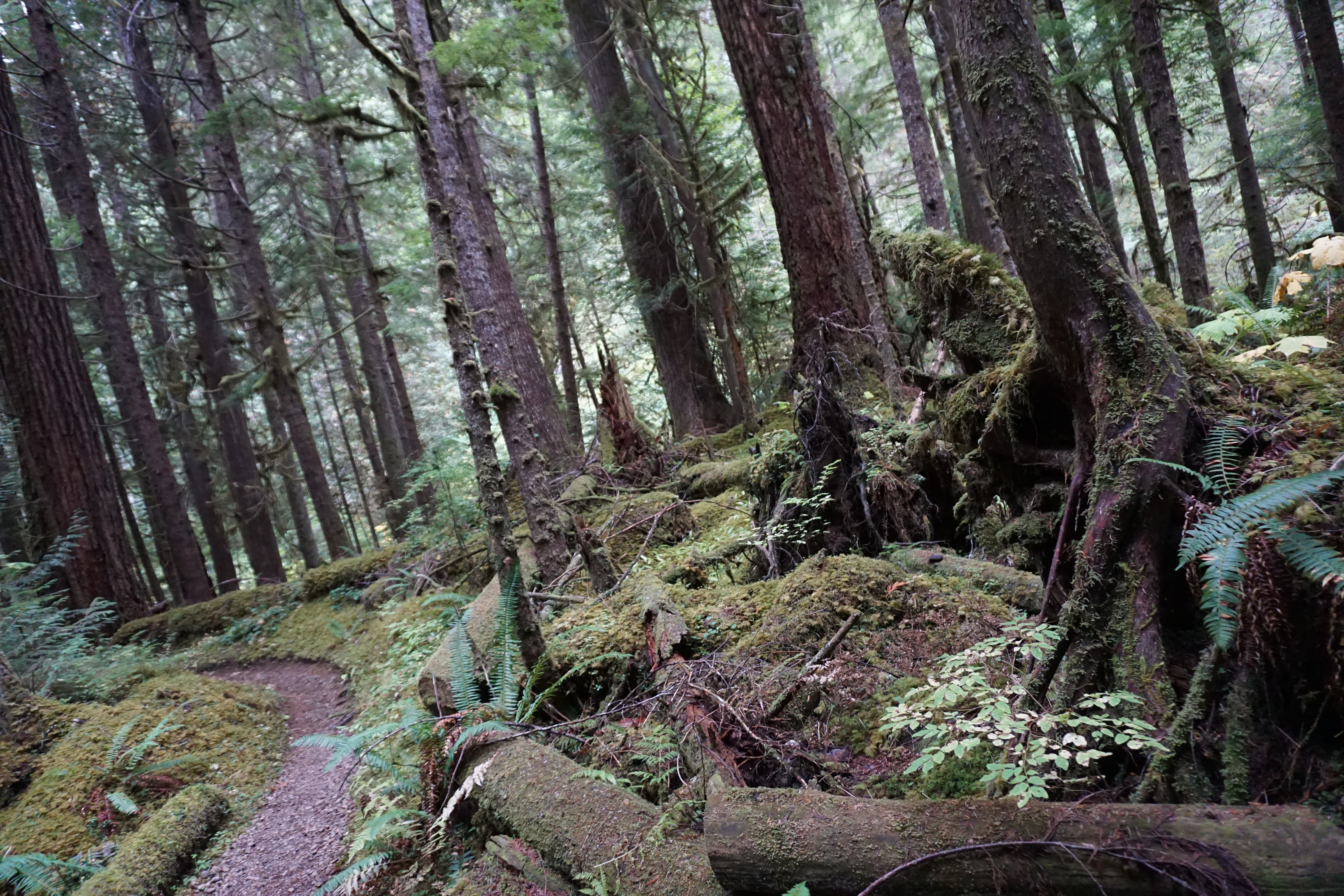 An Ascent Of Mount Walker

This trail is in the Dosewallips recreation area.

It’s a fairly short hike of 4 miles in total but with a height gain of 2000 feet to the top of Mount Walker it can be a challenge.

The trail is mostly in the forest as it winds its way ever higher through lots of switchbacks.

The forest is beautiful and quiet with the sun glinting through the trees.

At the top, we were rewarded with views from the North and South viewpoints.

The South Viewpoint is especially lovely as you look out over the Hood Canal and Mount Rainier in the distance.

After a rest and a snack, we started our way back down along the trail with Kebab.

The Mount Walker Trail is really nice and well maintained so we enjoyed every step of it.

The views from the top are amazing on a clear day. 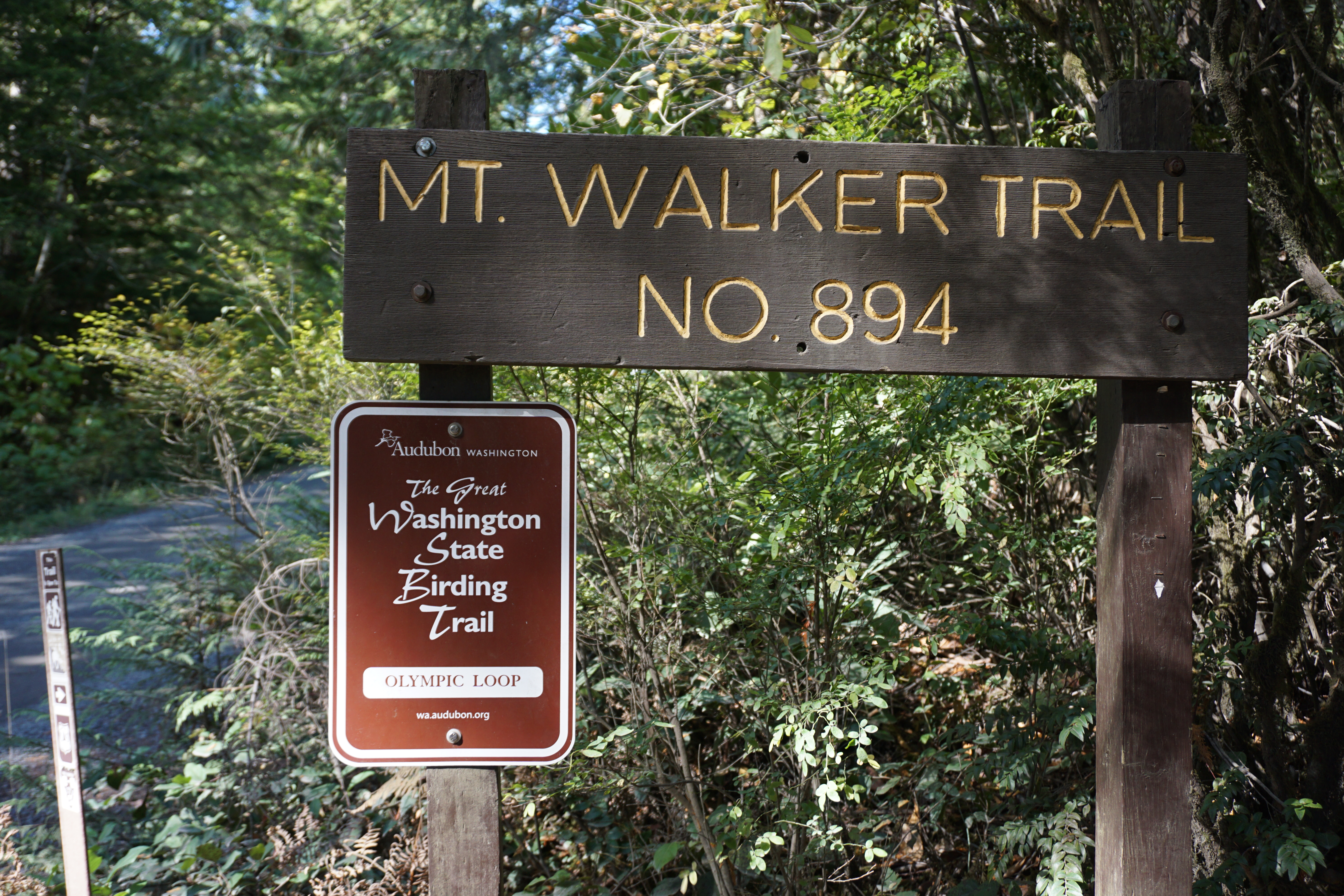 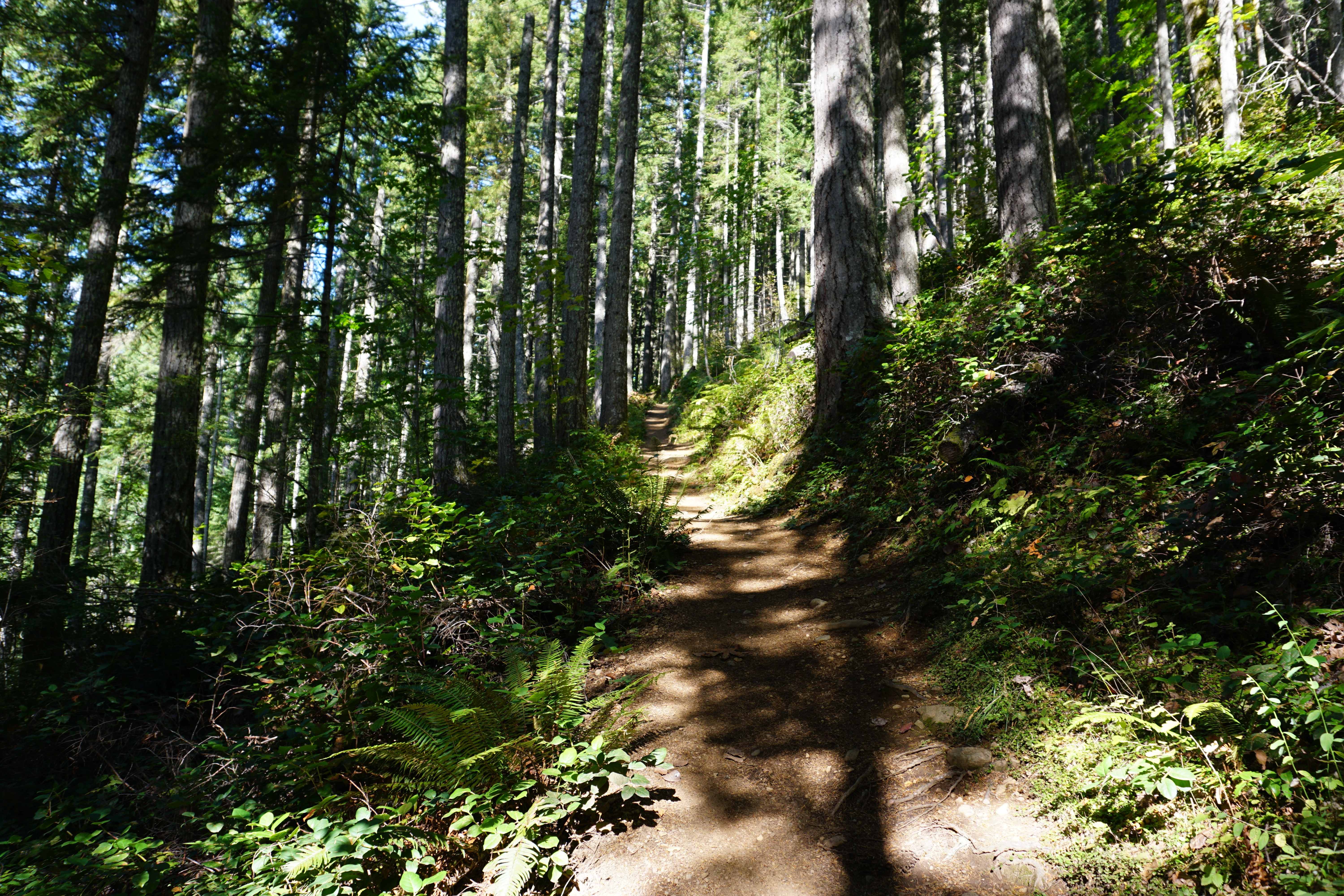 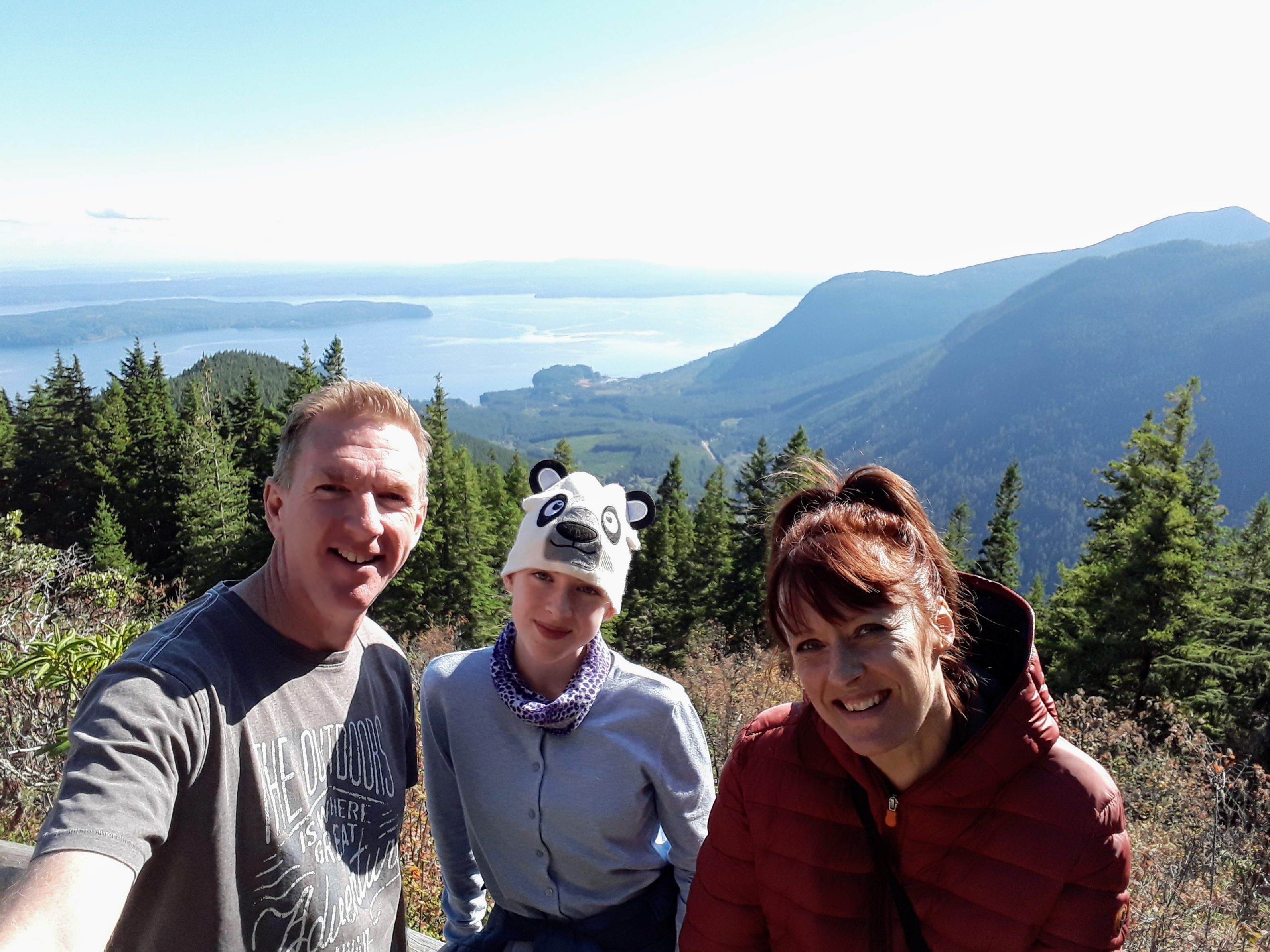 View From The Top Of Mount Walker

This trail is in the Dosewallips recreation area.

Only a short 1-mile trail but lovely scenery down by a river.

The falls canyon can be accessed via the disused campground at Falls View.

The short walk brings you to a lookout over the falls which, to be honest, was a little unimpressive as it didn’t have much water flowing at the time we were there.

But we found another trail that dropped down to the Big Quilcene River so we decided to explore that trail.

The trails brought us alongside the river to an area with calm pools of water.

We continued walking beside the river and eventually got to another small waterfall where the trail looped around and back to the start point.

Although the falls were a bit disappointing the walk along the river was very tranquil. 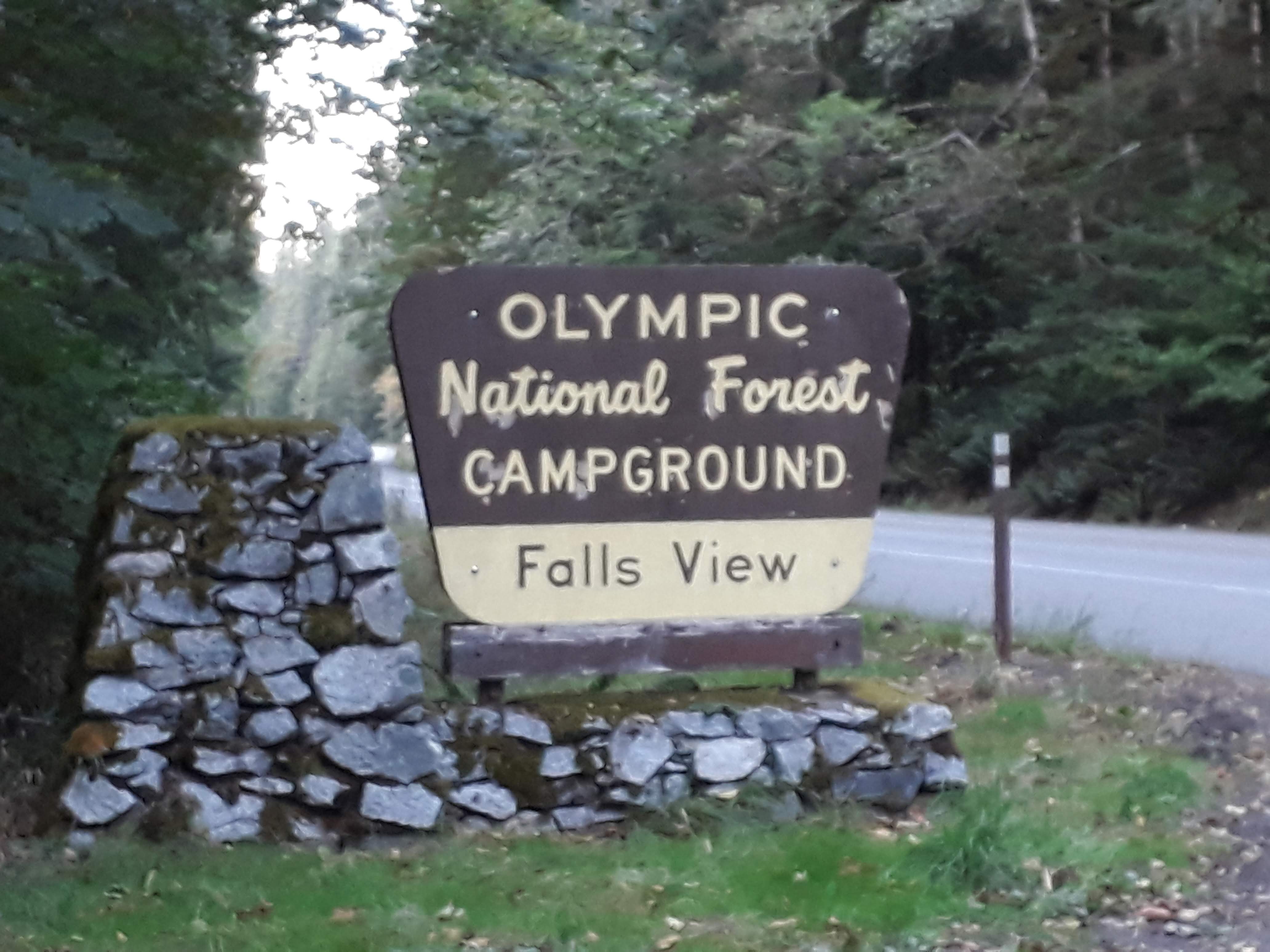 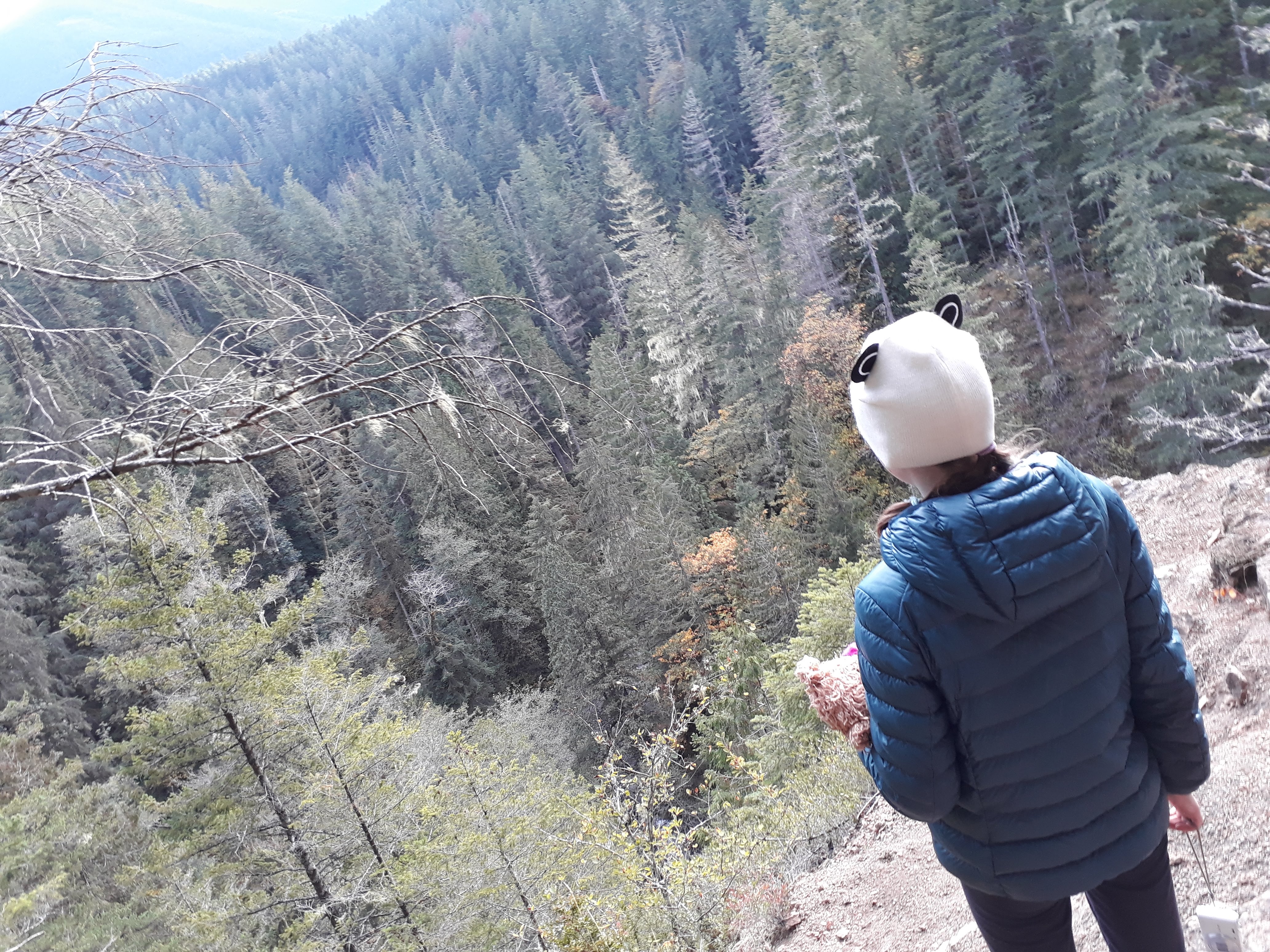 Falls View ( there was very little water in the falls ) 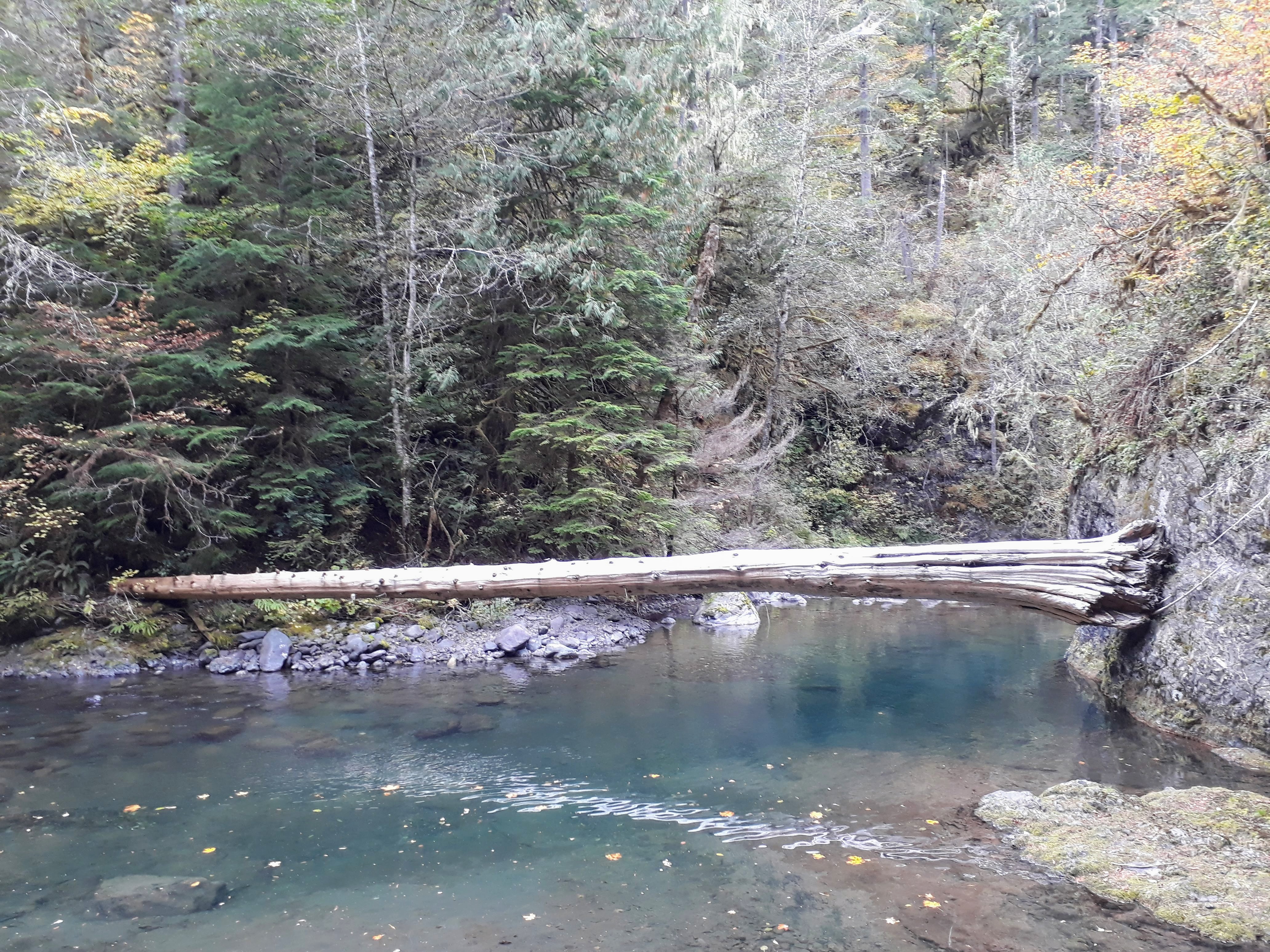 This trail is in the Big Quilcene recreation area and part of the Buckhorn Wilderness.

Overall this was our favourite hike.

It’s not dog-friendly so we couldn’t take Kebab along with us but it was probably a good job as it was quite a hike.

After a very long 7 mile drive over unsurfaced forest roads, we eventually arrived at the trailhead for Tunnel Creek.

The trail is nearly a 10-mile round trip up to the mountain ridge with amazing views.

The trail starts off through old growth forest alongside a small river and gently climbs through the fir trees.

This definitely felt like bear country so we made sure we kept shouting “Hey Bear” regularly.

This part of the Buckhorn Wilderness also felt very wild and isolated.

We didn’t see one other person all day and we realised how vulnerable you could be out here if you needed help. 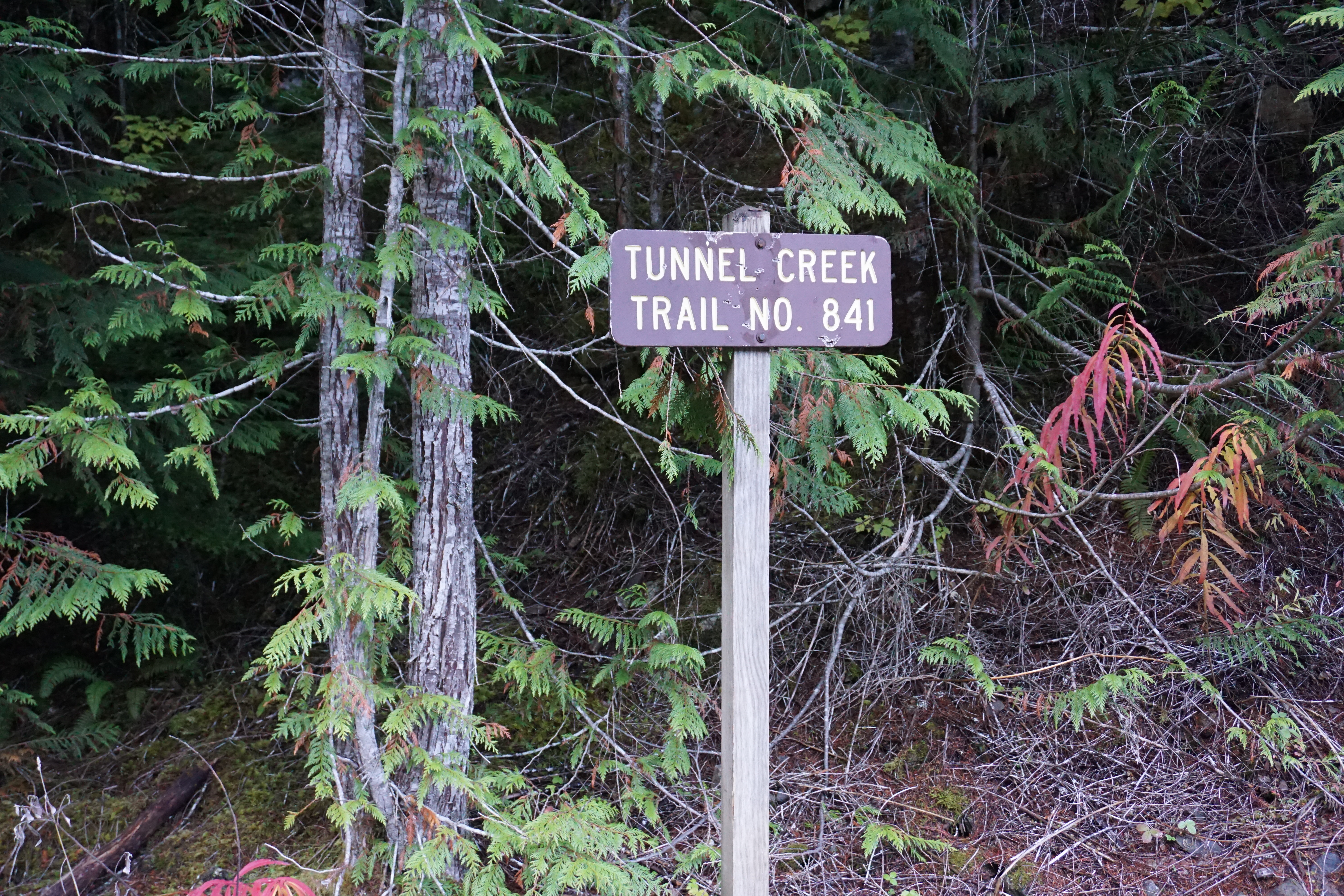 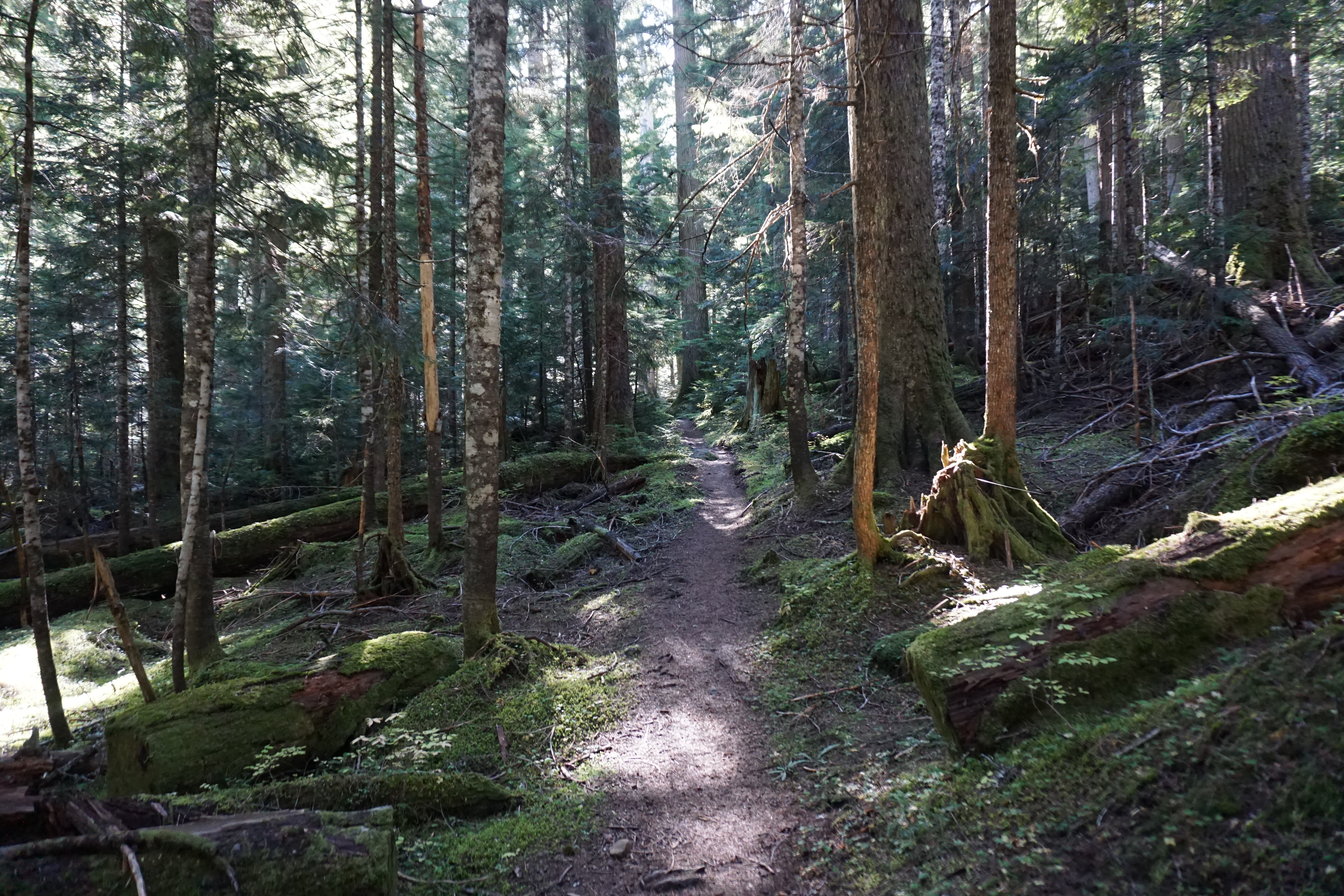 The trail crossed the river and then steeply ascended the mountainside with a series of switchbacks.

Again the trail is well maintained most of the way except for a fallen tree which we had to climb over.

The forest got thinner as we got higher and it seemed we were never going to reach the top.

We passed several ice-covered mountain lakes that were still and silent.

At last, we broke out on to the ridge with views out over the Hood Canal to Mount Rainier and Mount Baker in the opposite direction.

The mountain scenery was spectacular all around us and the forest below.

We felt so isolated that we stood on the top of a rock outcrop and shouted into the wilderness.

Our voices echoed all around the mountains and then it was silent again with only the sound of nature.

This was one of those hikes that will always stick in our memories, that truly felt wild and unspoilt. 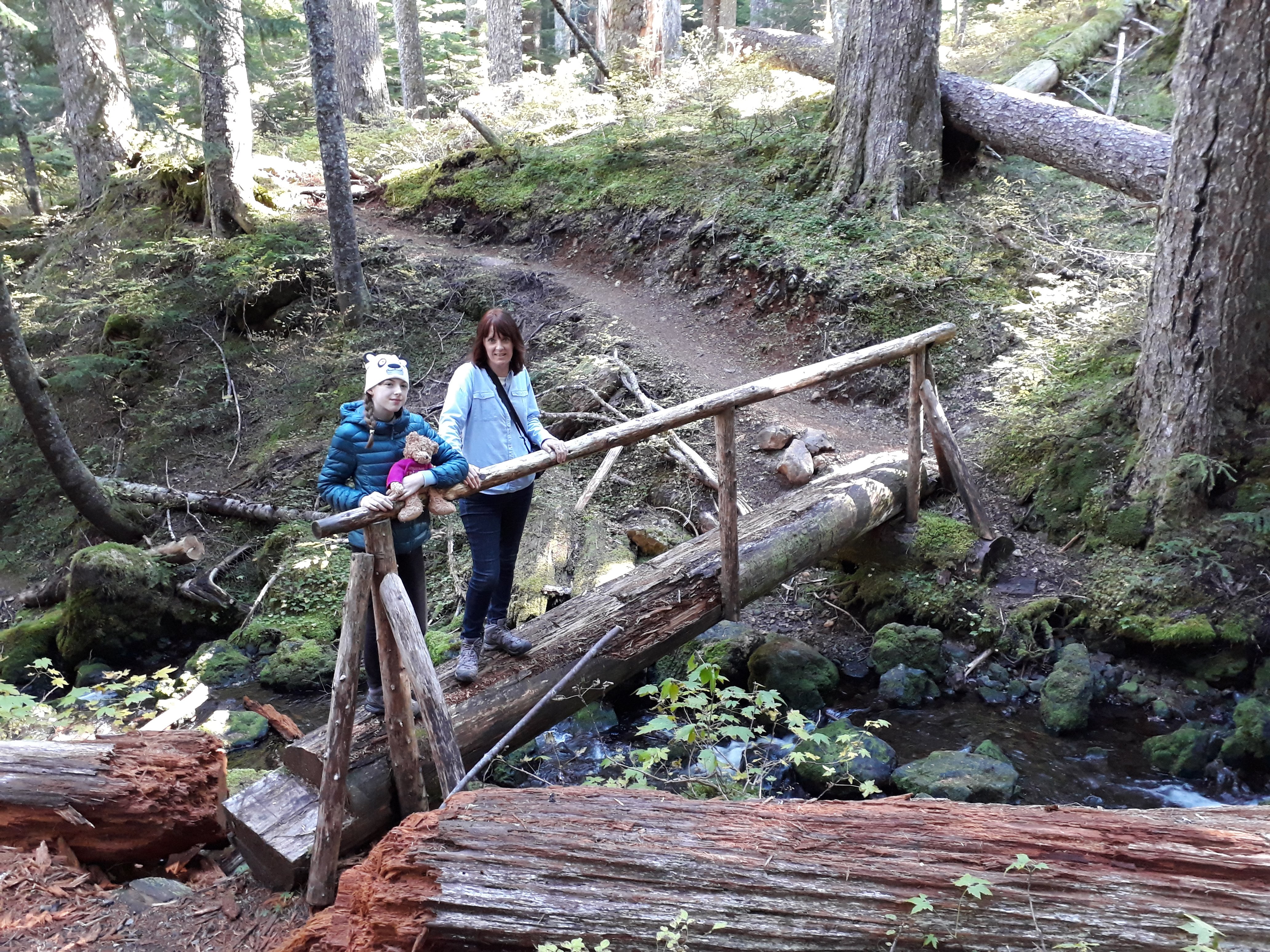 Crossing A River On The Tunnel Creek Trail 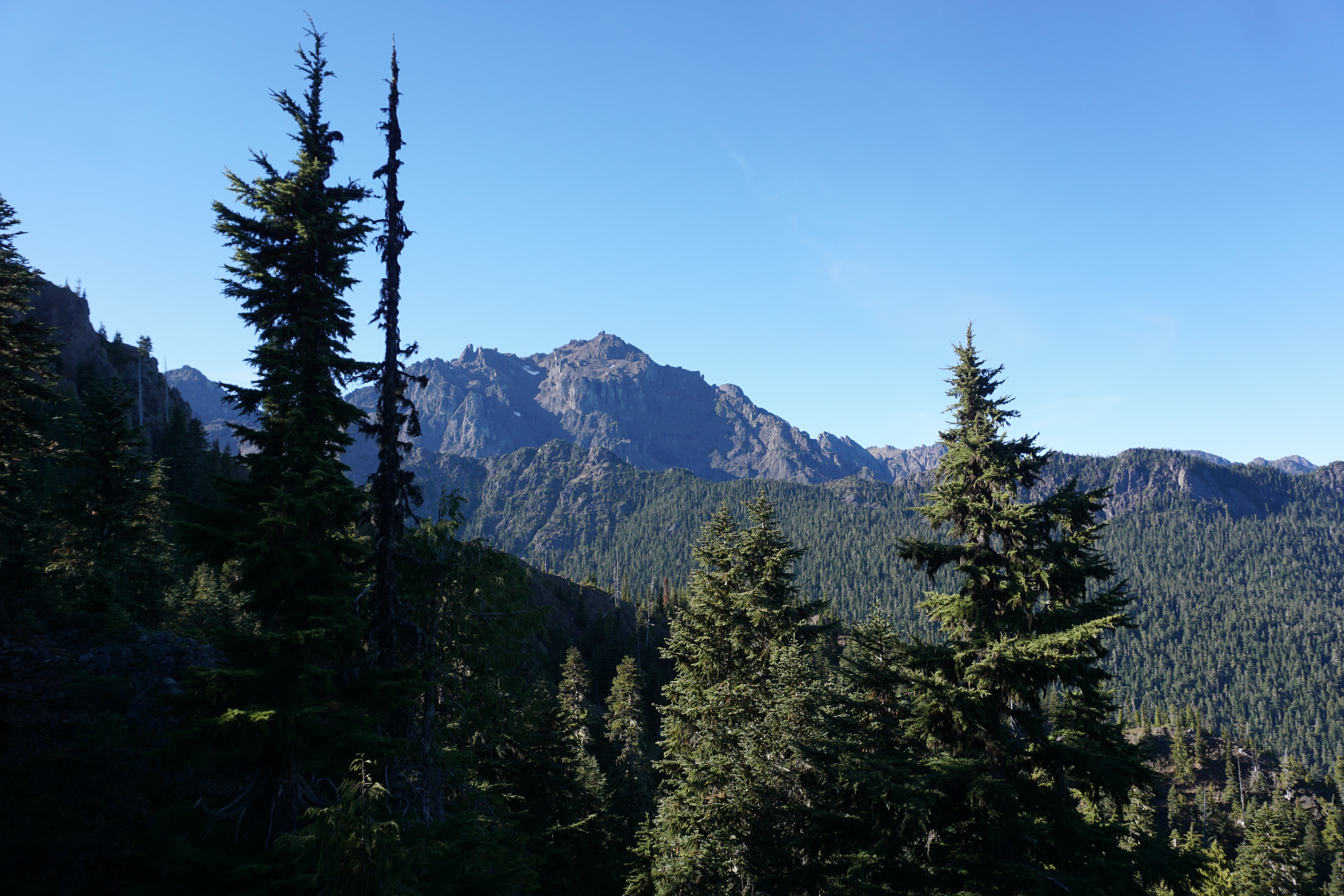 Amazing Views From The Mountain Ridge On Tunnel Creek Trail

We fell in love with hiking in the Olympic National Forest.

Most of it is true wilderness and much less touched than the Olympic National Park with all of its crowds.

There are endless opportunities to hike in the unspoilt forest and mountain landscape.

Most importantly we enjoyed it as a family. exploring and having fun together. 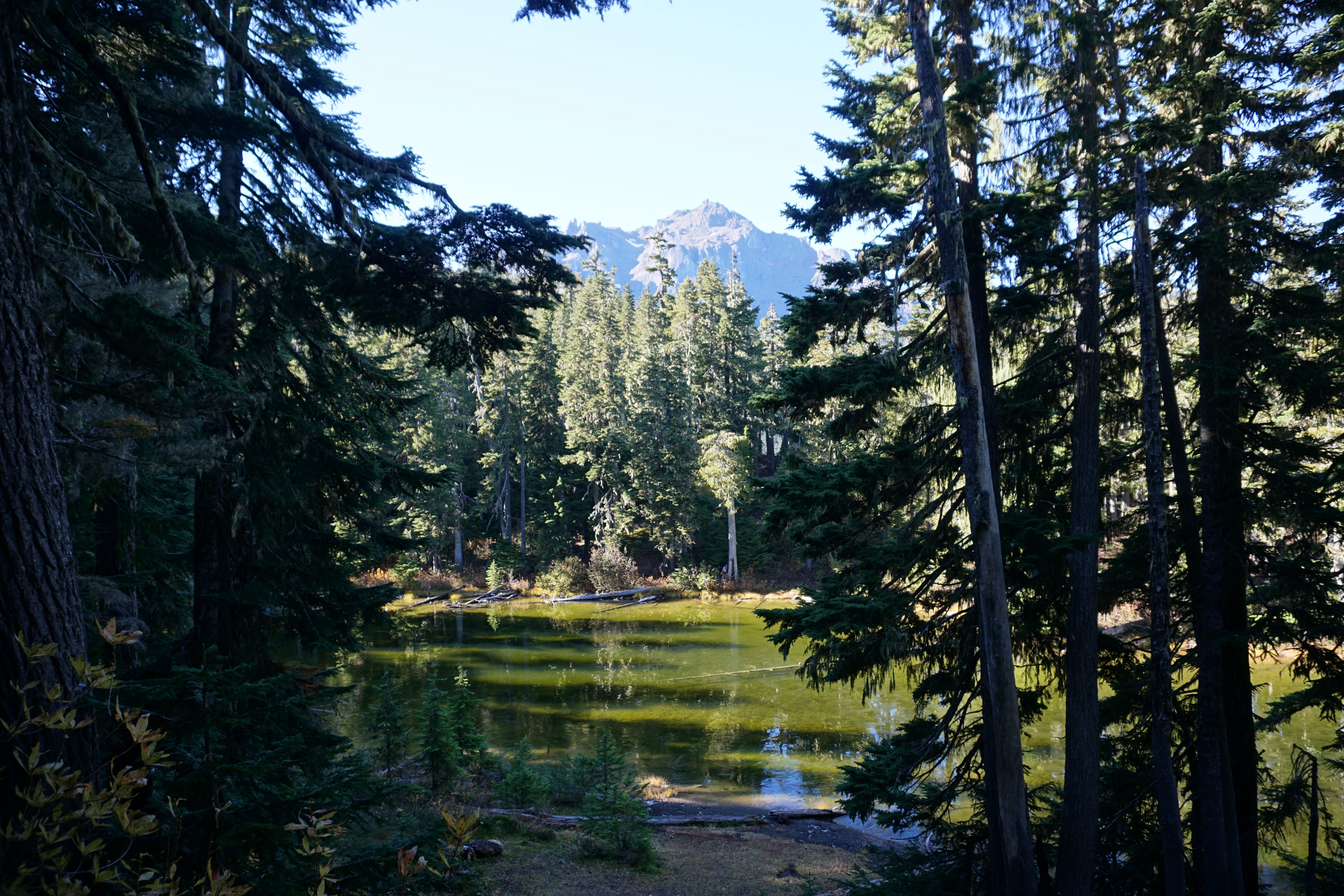 Not all areas require a day pass so it can get a bit confusing as to whether you need one or not.

It’s best to consult the Olympic National Forest Website who have a list of trails and whether a pass is required or not.

It’s the same with taking dogs on trails, some areas are OK, others not, so take a look at the trail information.

An annual pass is also available and we were lucky enough to have use of one from the owners of the house we were sitting.

Although the lady at the Visitor center told us that bears were only well back in the mountains when we asked her about bear safety, we did see one.

A Black Bear actually ran across the highway in front of us so they were around and after that, we made sure to make a lot of noise on the trails.

We saw a second black bear in another location too.

While we hiked we just called out “Hey Bear” every so often.

It was fun at first but did get a bit tiresome after a while.

It seems so counter-intuitive to make noise while you hike in the beautiful and peaceful wilderness.

There are apparently also Mountain Goats and Cougars in the National Forests areas.

Just be aware of what to do around wildlife by picking up a copy of the free Olympic Outlook Paper. 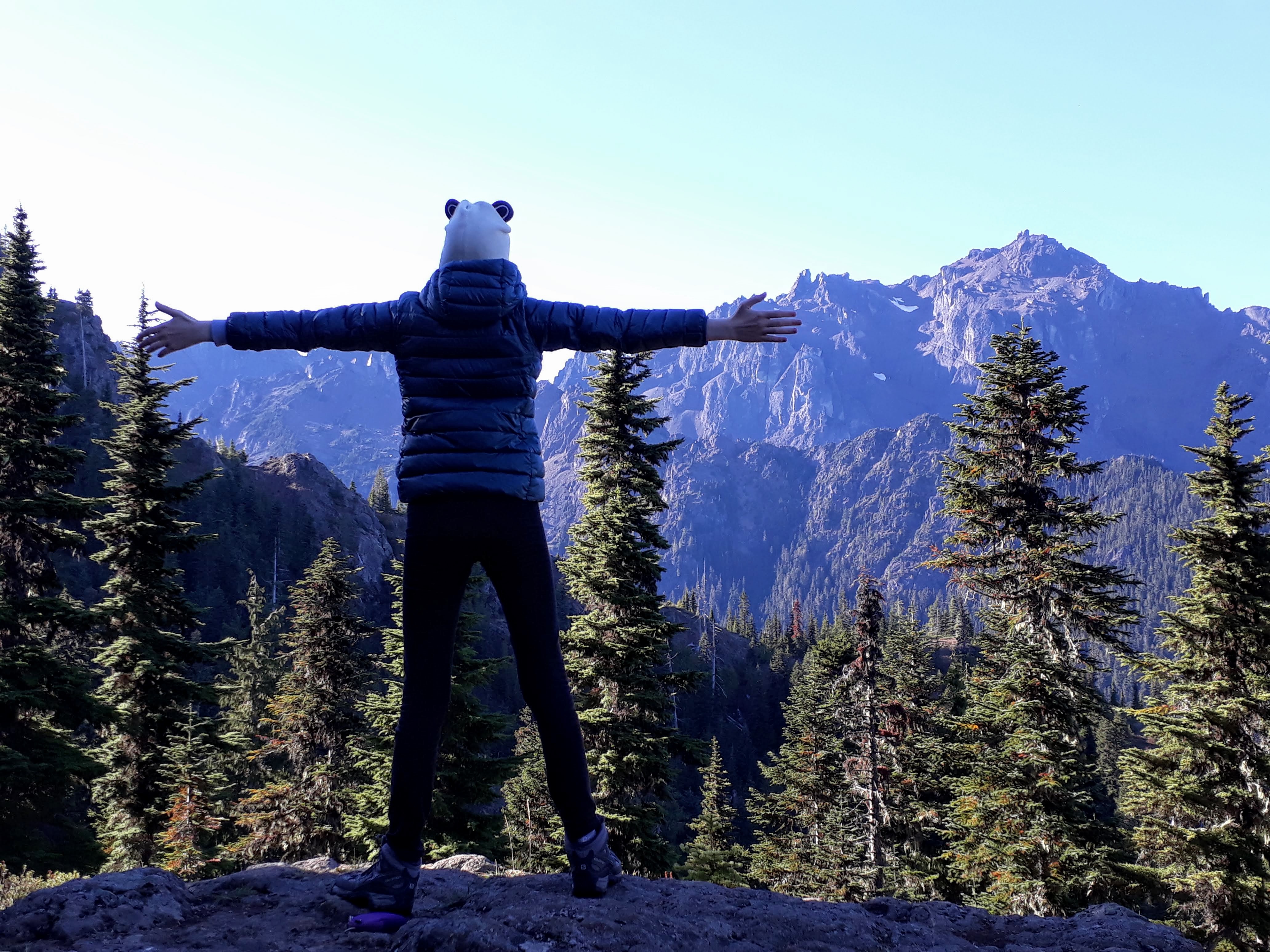 Shouting From The Mountain Top