There’s no denying the magic we feel when entering a Disney park and going through the gates at the Hong Kong Disneyland Resort was no different.

We’d visited the Florida parks a few times but this was our first taste of the Asian Disney theme park.

Would we enjoy it as much?

There was only one way to find out. 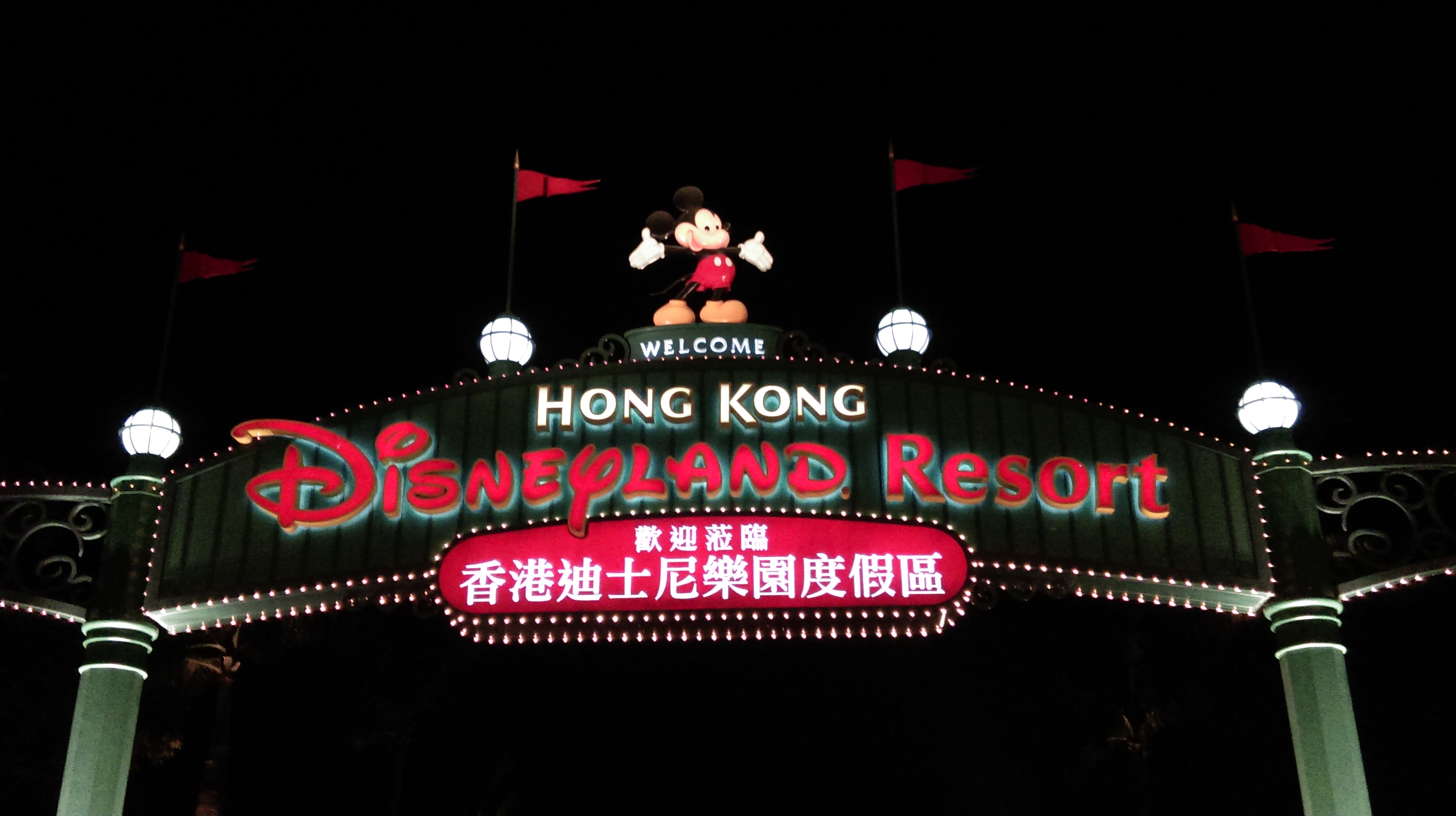 We’d based ourselves in Chiang Mai, Thailand for the last three months but it had come time to do a visa run so that we could re-enter Thailand to stay longer.

The Thai government had announced that it was dropping all charges for a Thai visa but we still had to obtain it from outside of Thailand.

The question was where should we go.

Kuala Lumpur is a very common choice but we wanted to go somewhere different.

So what about Hong Kong we thought.

We started to research Hong Kong and by chance found that there is a Disneyland there ( which we never knew before now).

By coincidence, Annabel’s 11th birthday was coming up so if we planned things right it would be an amazing surprise for her.

Not only was it Annabel’s birthday but being early December, Disney should be all decorated up for the holidays.

We decided not to tell her about Disney and just say we were going to Hong Kong for a few days.

Chiang Mai was the best airport for us to fly to Hong Kong from and the flight is only just under three hours.

So the day came and we had to leave our hotel in the very early hours for our 6 am Air Asia flight.

We’d only be in Hong Kong for just over two days so planning was essential to make sure we were able to get our visas and visit Disneyland. 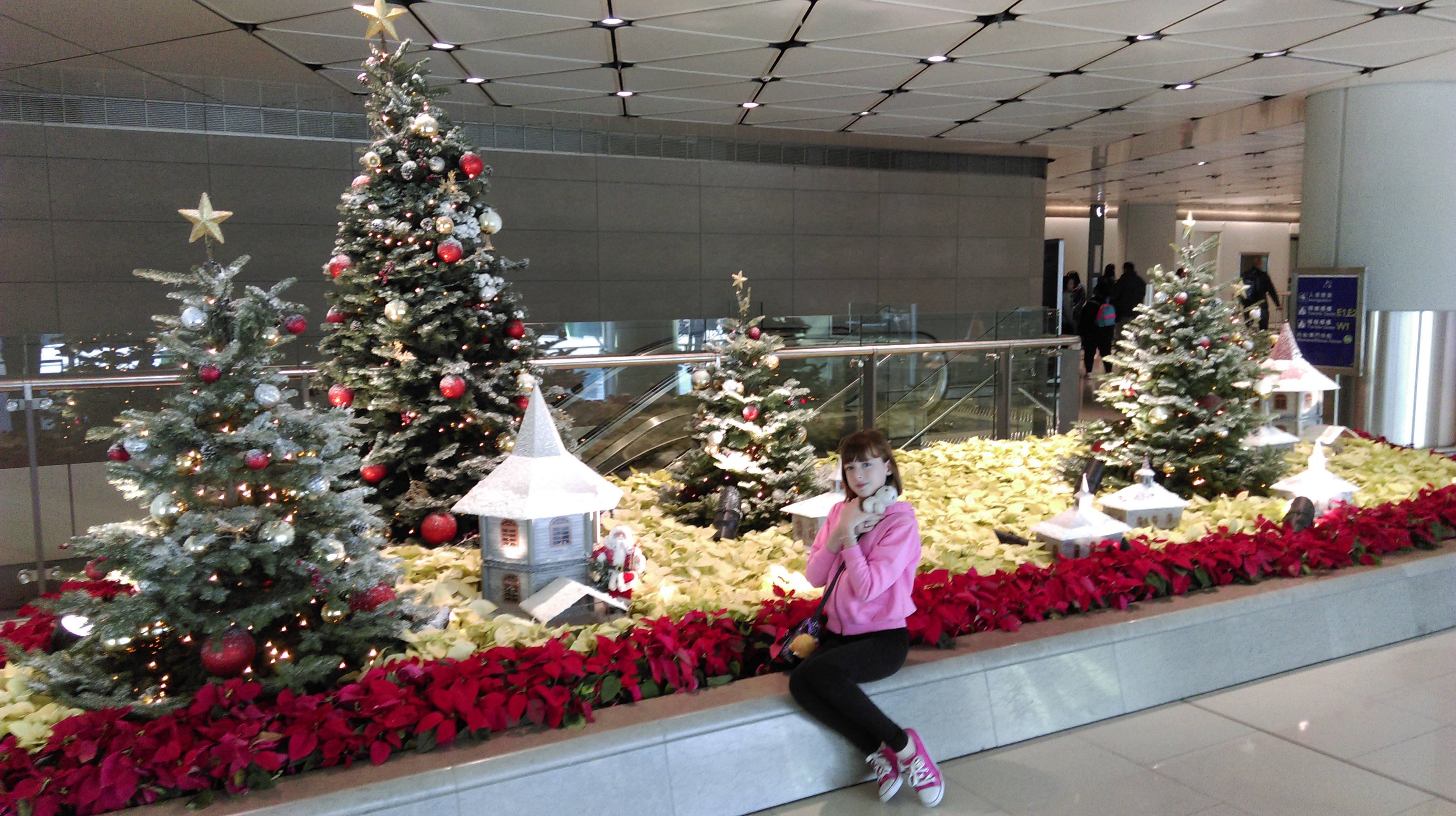 After a smooth and what seemed fairly quick flight we found ourselves at Hong Kong International airport and what a surprise to see Christmas trees galore all decorated for Christmas.

It certainly put us in the festive spirit.

As we queued up at immigration we announced to Annabel that we’d be visiting Disneyland and she was over the moon, to say the least.

We found the bus station and caught one of the many double-decker buses that get you into the city.

First stop would be to see if we could check into our hostel and drop our bags off then go and try to find the Thai Embassy on Hong Kong Island before setting off for Hong Kong Disneyland.

Luckily the bus dropped us right by our hostel which was a very budget hostel in a very tall building.

The building contained lots of businesses and small hostels so finding ours was a bit of a task but we managed to find it and got shown to our extremely tiny room. 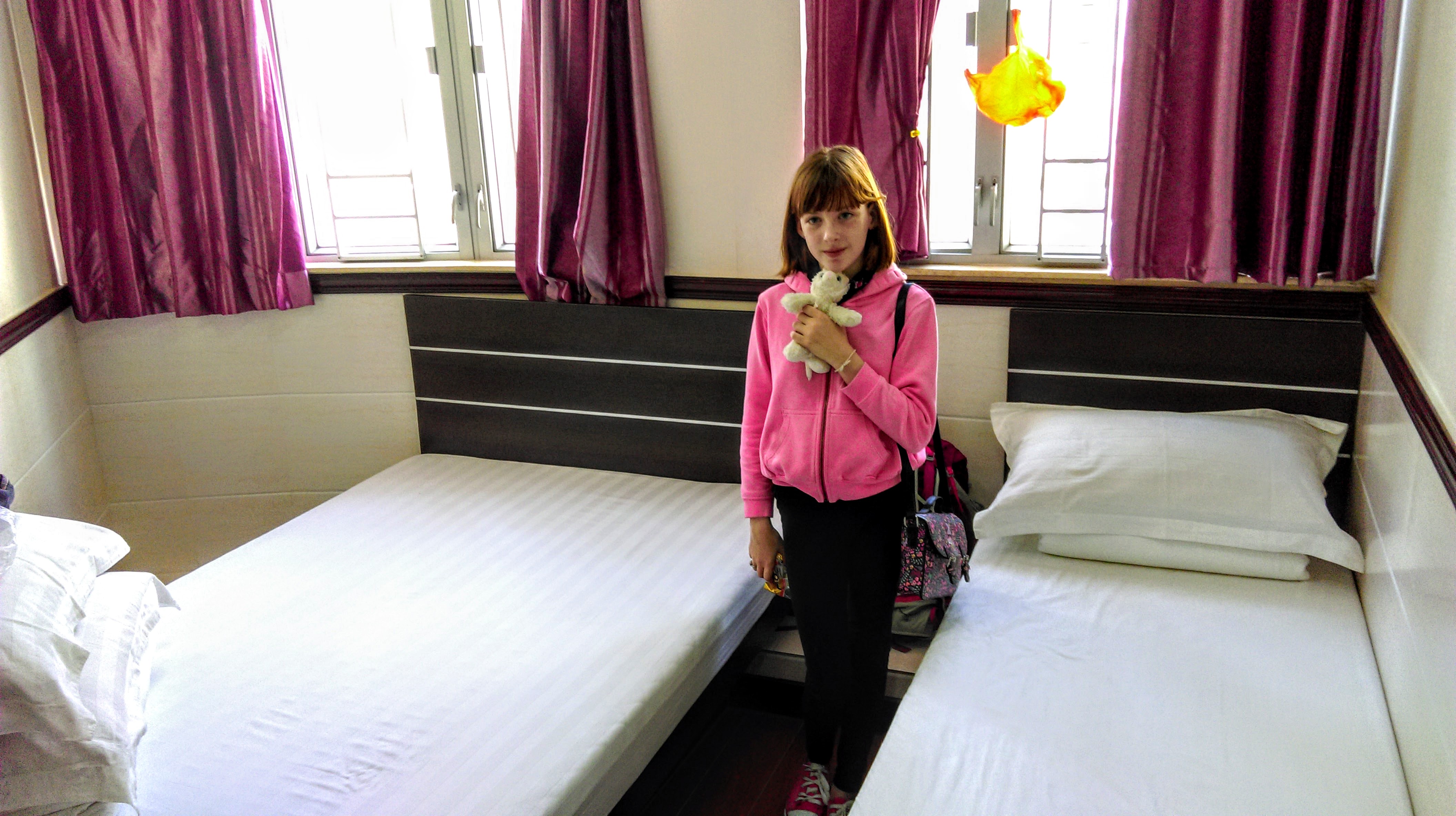 Our Room At The Hang Ho Hostel On Nathan Road

After dropping our bags off we made our way to the metro to get from Kowloon where our hostel was to Hong Kong island where the Thai embassy was located.

A bit of searching brought us to the Embassy and we put in our application for the visa, handed our passports over to collect the next day and got back to the metro to go to Disney.

Disneyland is located not too far from the airport so if we hadn’t had to come into the city to apply for visas it would have been better to stay nearer to the park or airport.

We’d booked a two-day ticket for Hong Kong Disneyland just in case the visa process took longer than we thought but all was working to plan so far and after a 30-minute metro ride we got to Sunny Bay station where the Disneyland train takes you to the park.

A few minutes later and we were on the Disney express to the park. 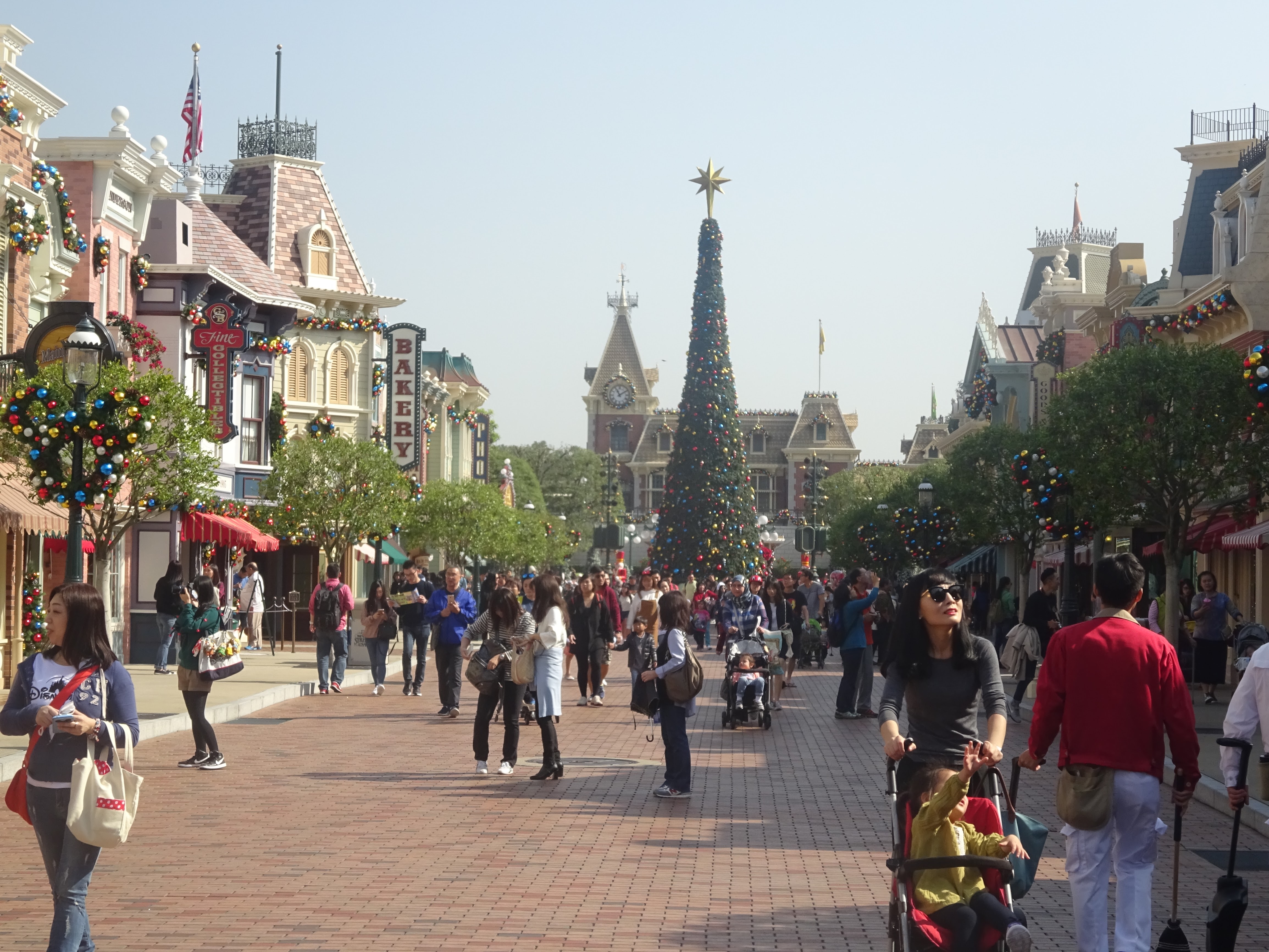 Disneyland Hong Kong is laid out like its US cousins with all the attractions and rides you would expect.

As you enter below the Main Street railway station you are greeted by Main Street itself with Cinderella’s castle in the distance.

The only difference you will notice with the Hong Kong park is that it’s on a slightly smaller scale than the Florida Magic Kingdom but we thought this actually made it more manageable and not such a rush to get around all the rides.

There are seven areas to explore… 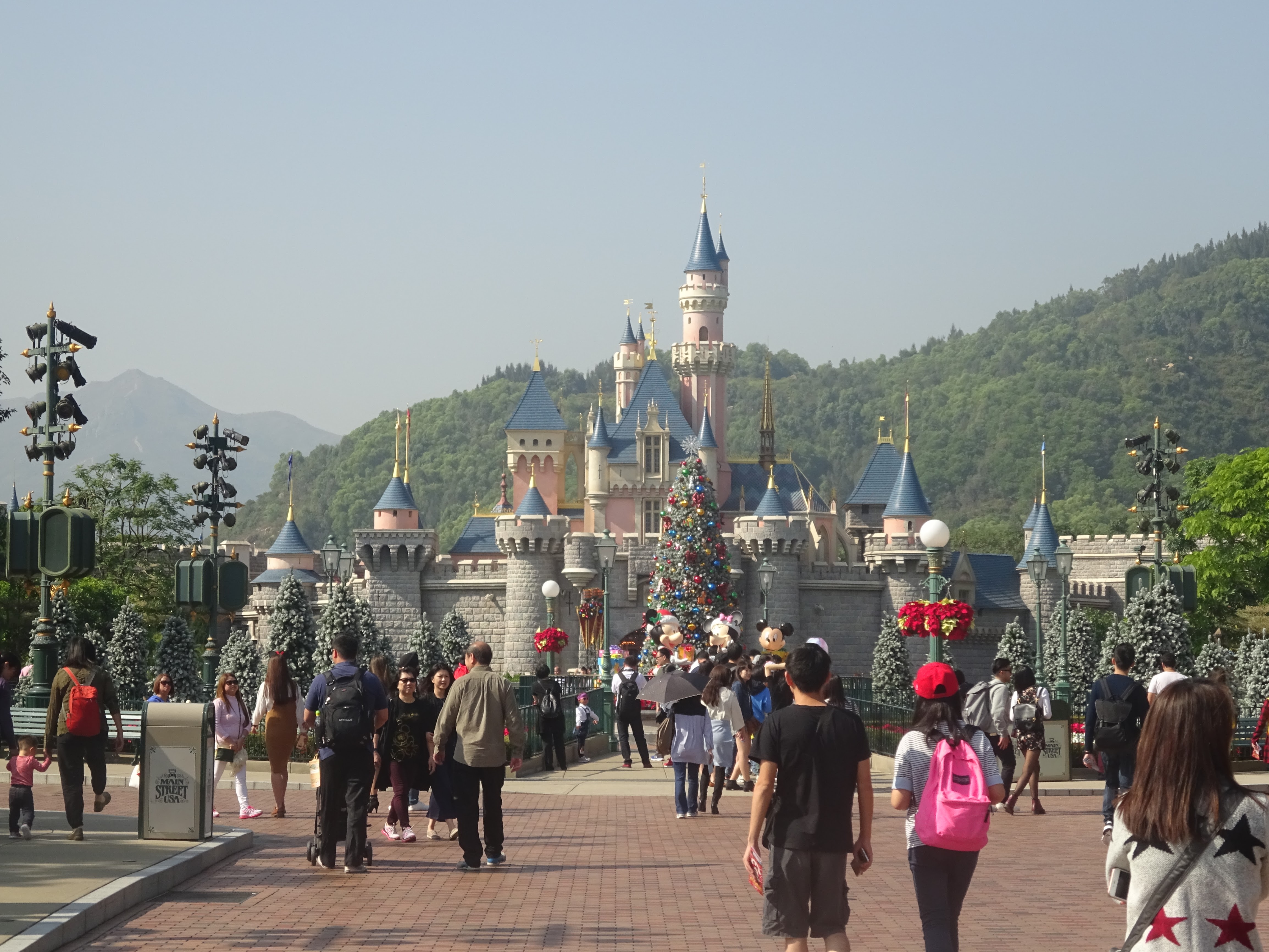 Visiting any Disney park is amazing but visiting in the Holiday season is extra special with all of the Christmas trees and decorations.

The characters are also dressed up in their Christmas outfits and were lucky enough to get a photo opportunity with Goofy who is one of Annabel favourites.

We loved the Star Wars Hyperspace Mountain ride which is an indoor and in the dark rollercoaster.

Unfortunately, the Iron Man Experience was still being constructed and not quite open yet but I’m sure it will be brilliant.

There’s all the parades that you have come to expect from Disneyland as well as the character meet and greets with all you favourites.

The food available is expensive as in the US parks so bear that in mind.

We stayed until evening to watch the firework display above the castle and then made our way back to Kowloon and our tiny hostel room. 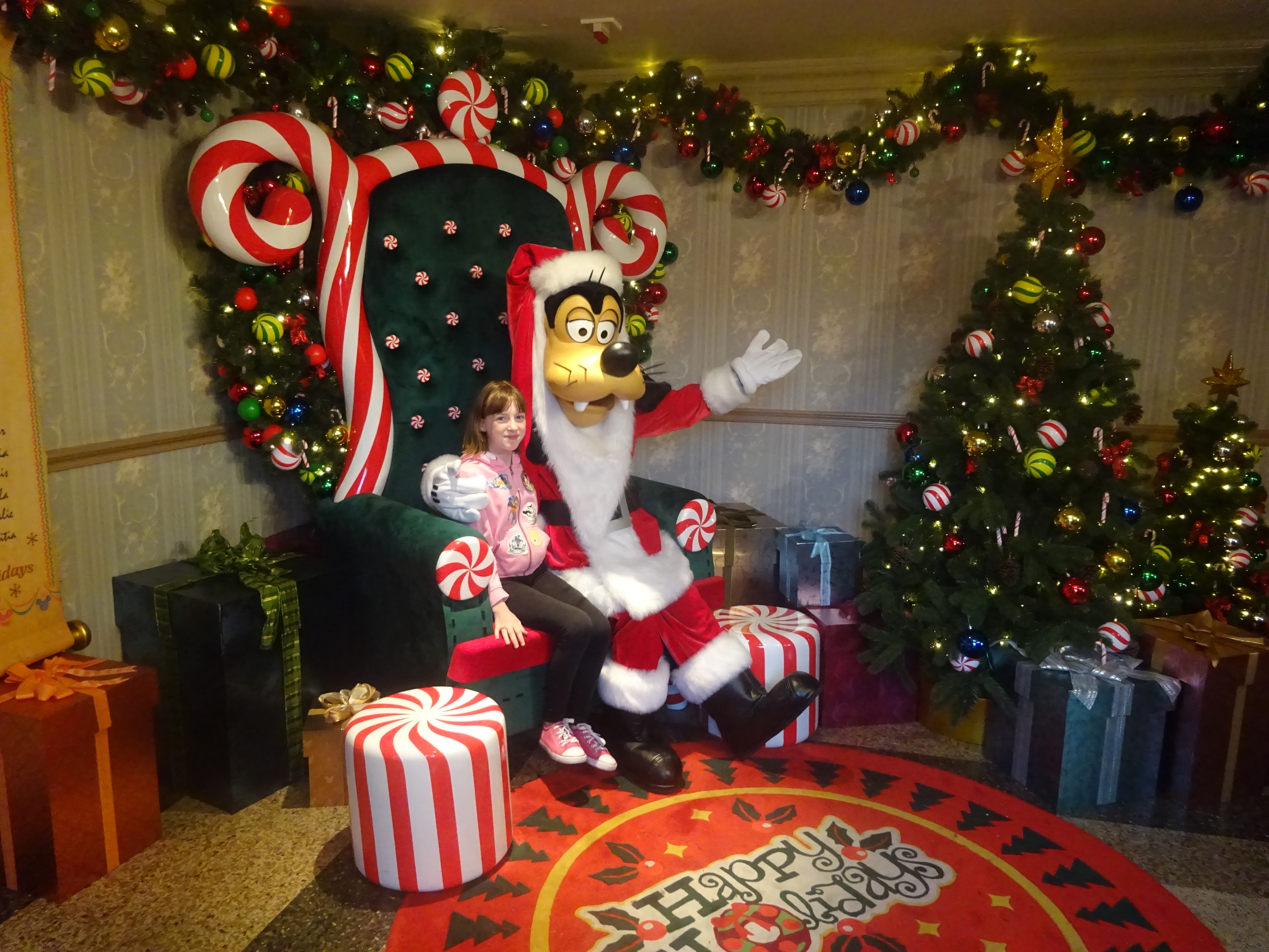 Meeting Santa Goofy In His Grotto

Next day we were up early to go and collect our visas from the Thai embassy which were ready and waiting for us and even better were free.

Then we were off for our second day in the park.

I think we managed to get around all the main rides on our first day but it’s always nice to be able to go back to your favourite rides again.

We loved the Mystic Manor which in the US is the Haunted Manor but here in Asia, I think the idea of ghosts is a bit taboo so it’s just a magical manor where things come alive but we really liked it.

After we’d ridden everything as much as we wanted to we left the park and headed back on the train to Kowloon and our final night at the hostel.

Next morning we caught the bus from just outside our hostel back the airport and our flight back to Chiang Mai, visa in hand.

It was a great few days and we had magical fun at the park with all of the rides and Christmas atmosphere. 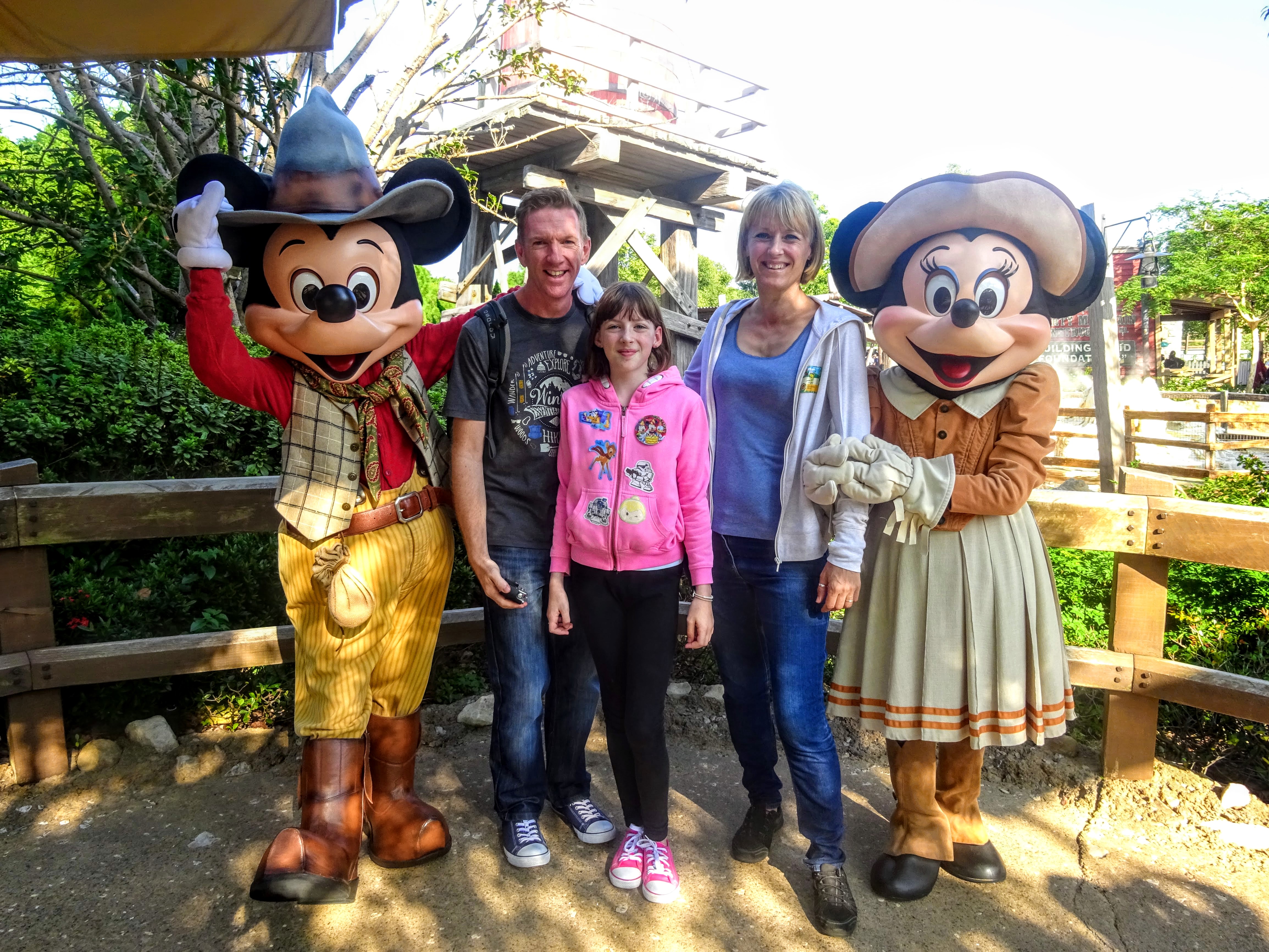 How We Did It

How We Got There

The airport is situated on Lantau Island which is the same island that Hong Kong Disneyland is on.

Outside the airport, you’ll find the main bus terminal with regular buses to all parts of Hong Kong.

If you’re going straight to Disney from the airport, special coaches are available

The Mass Transit Railway or MTR can take you from the airport into Hong Kong or alternatively you can go straight to Disneyland by changing from the MTR to the Disney Resort Line train at the Sunny Bay Station.

If you’re staying in Hong Kong or in Kowloon, you can catch the MTR out to the Sunny Bay station and then transfer to the Disney resort line train.

We reserved a room at the very basic Hang Ho Hostel on the popular Nathan Road.

The rooms are tiny but very clean and fine for a couple of nights stay.

We pre-booked the two-day pass which is not too much more expensive than the one day and gives you the chance to return to your favourite rides.

You can buy your park tickets here.

It’s worth taking a look at the park calendar to see special events plus the firework schedule as they are not on every day.

Official information about the Park can be found here. 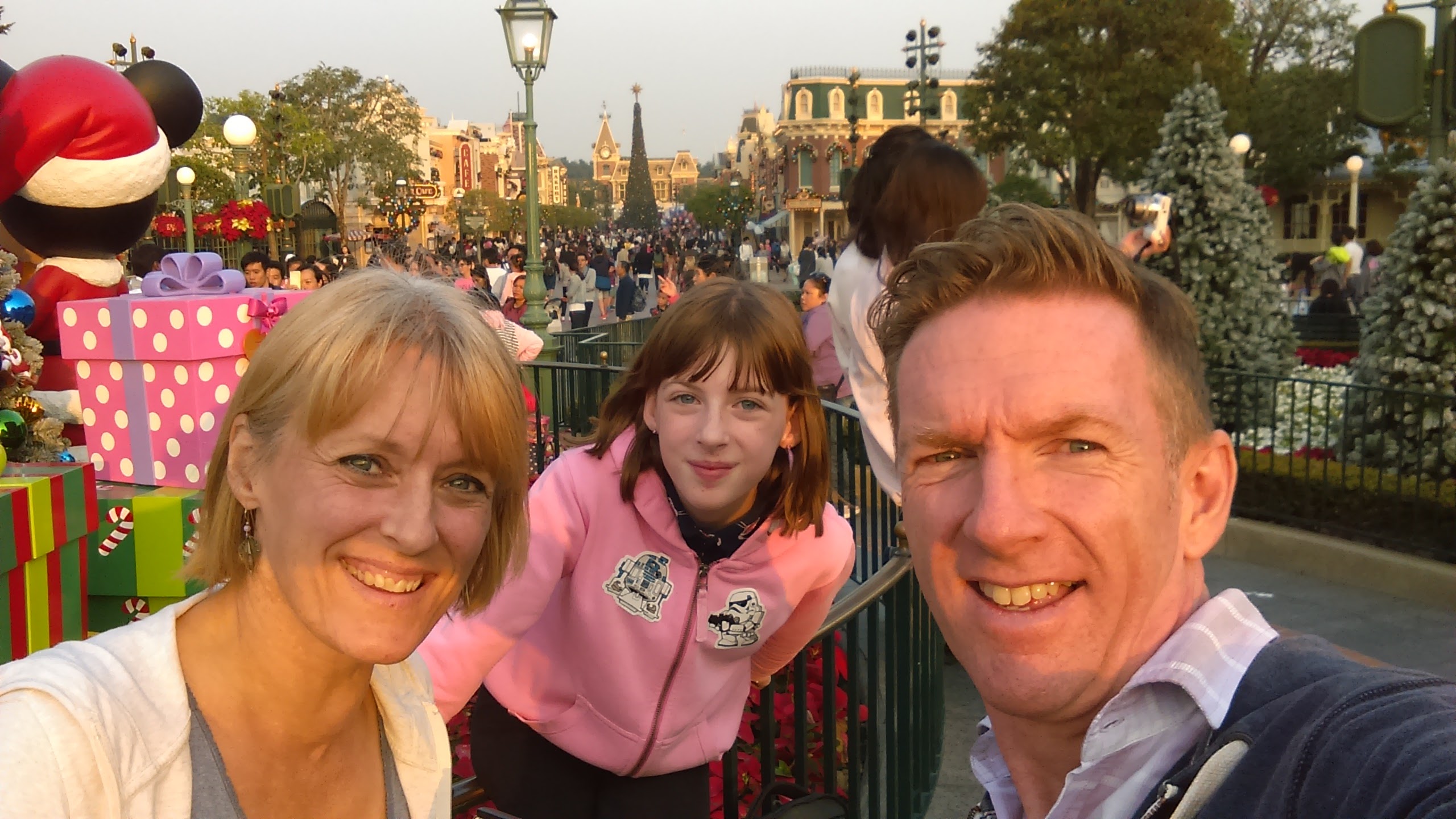 We Had So Much Fun At Hong Kong Disneyland