Craters of the Moon National Monument lies 18 miles South of the small town of Arco, Idaho.

Nothing could have prepared us for the seemingly alien landscape scared by volcanic eruptions and lava flows.

Exploring Craters of the Moon National Monument is indeed like setting foot on a lunar surface.

It’s not just what’s on the surface that is amazing but also what lies underneath this vast area of natural beauty.

Here’s our guide to the Craters of the Moon National Monument. 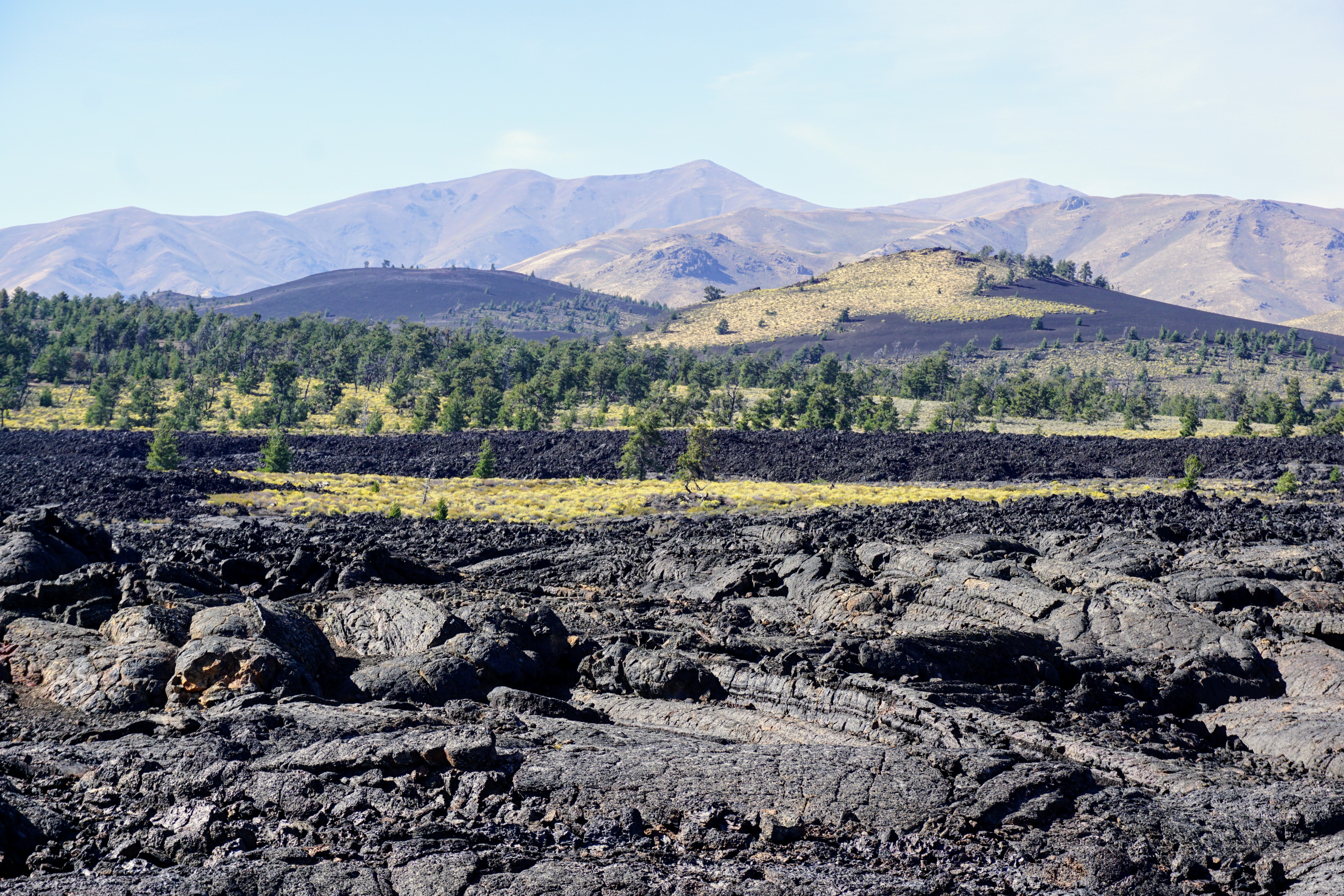 Make Sure To Stop At The Visitor Centre

As you leave Highway 20 and enter Craters of the Moon National Monument stop at the Visitor Centre to get a good background on the park.

They show information films, have exhibits and offer ranger-led walks.

You’ll also need to obtain permits from here if you want to go down into some of the lava tube caves.

The rangers are very knowledgable about the monument and can also recommend things to do and what caves might be suitable for you to visit. 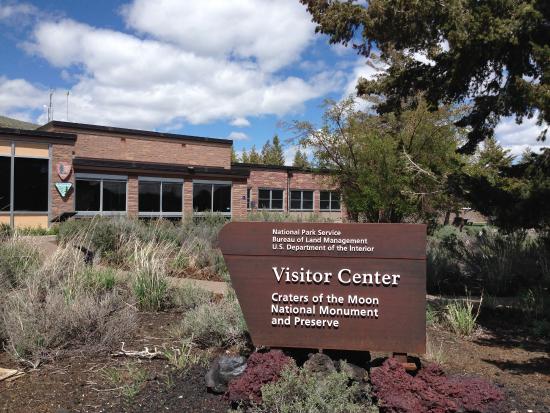 Once you leave the Visitor Centre you’ll head through the entry kiosk to buy your tickets  ( no cash taken ) and then head out into the volcanic landscape.

The 7-mile loop road will take you around all of the main sites with parking areas for the trails and sights along the way.

Stop off at as many sites as you have time for as there is so much to see and do some of the short trails if you can. 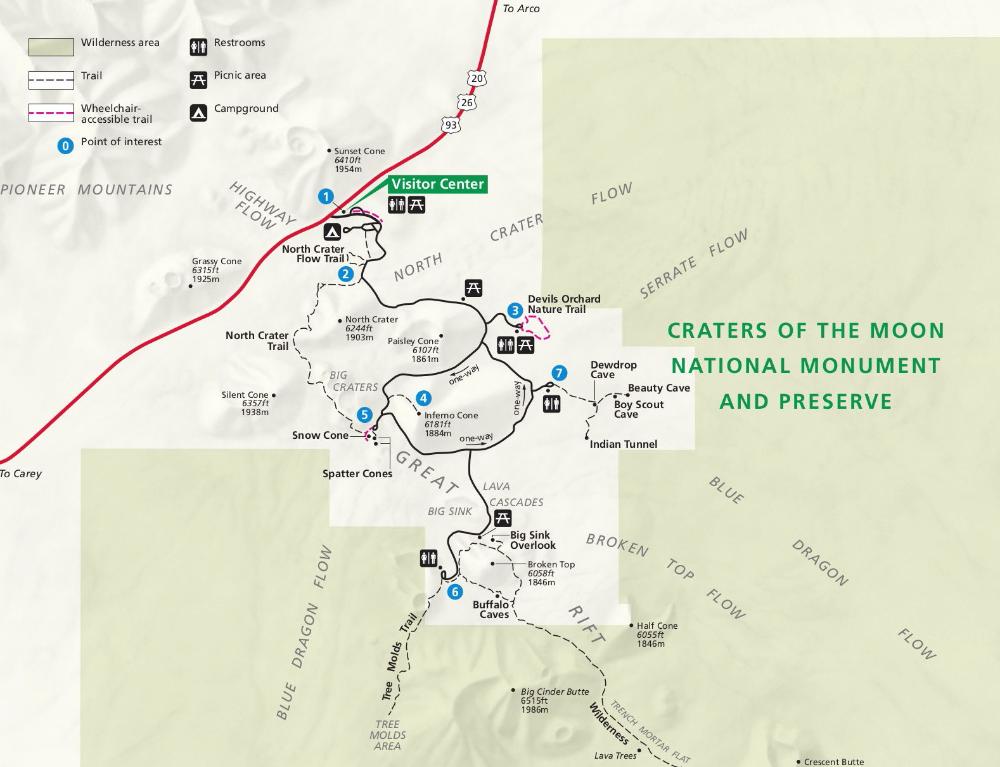 A short 0.3 trail leaves the parking area at the North Crater Flow.

It’s quite strange to think that you’re walking over a huge lava flow.

Information boards along the trail give you a background into the geology and history of the area you’re walking in.

The dark solidified lava forms waves in some places and almost looks like it could be liquid.

Look out for some beautiful wildflowers around the area. 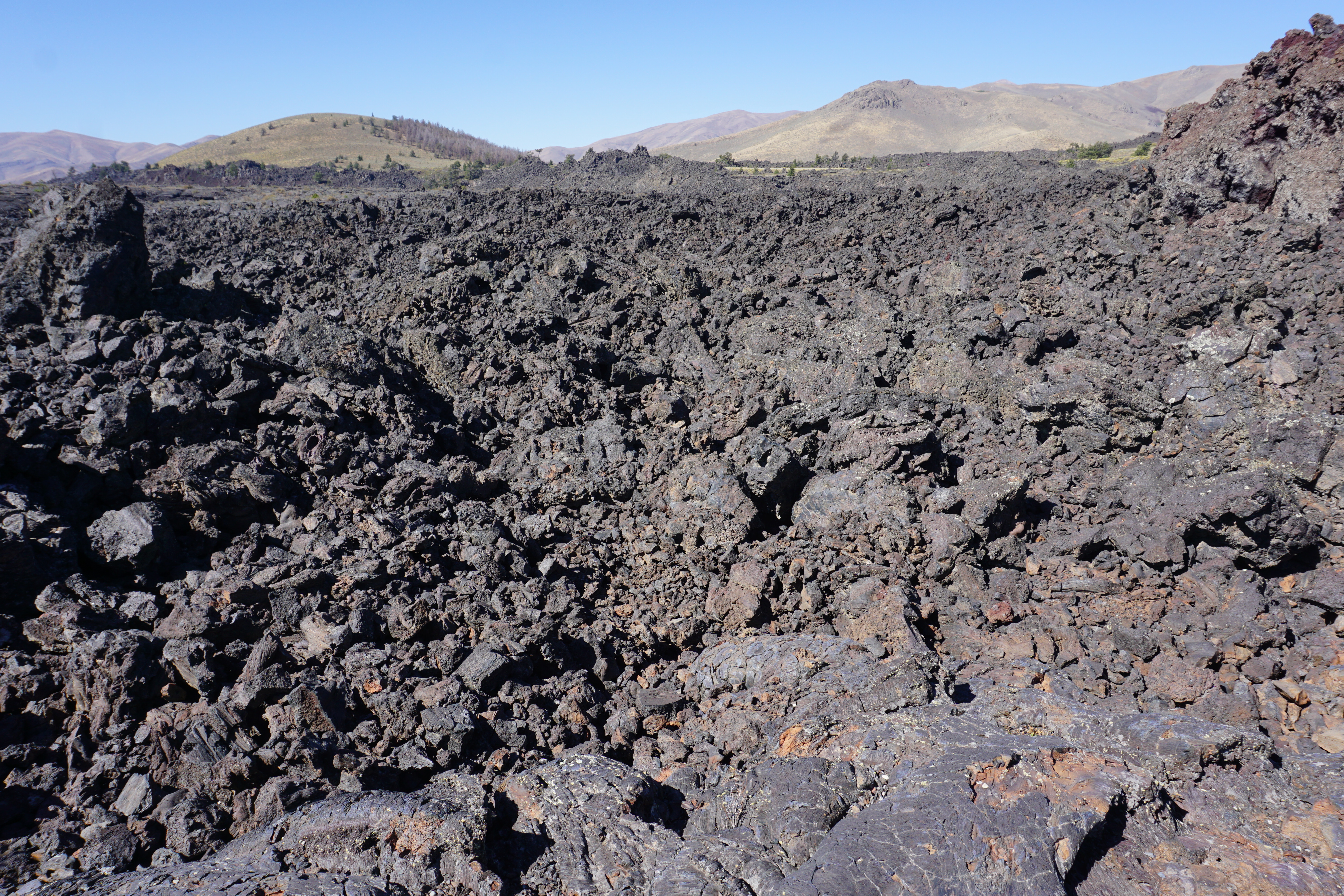 The next stop on the loop road is the Devils Orchard where you can take another short trail through the oddly shaped lava formations.

You can also learn about the human impact on the area and how the park is being protected. 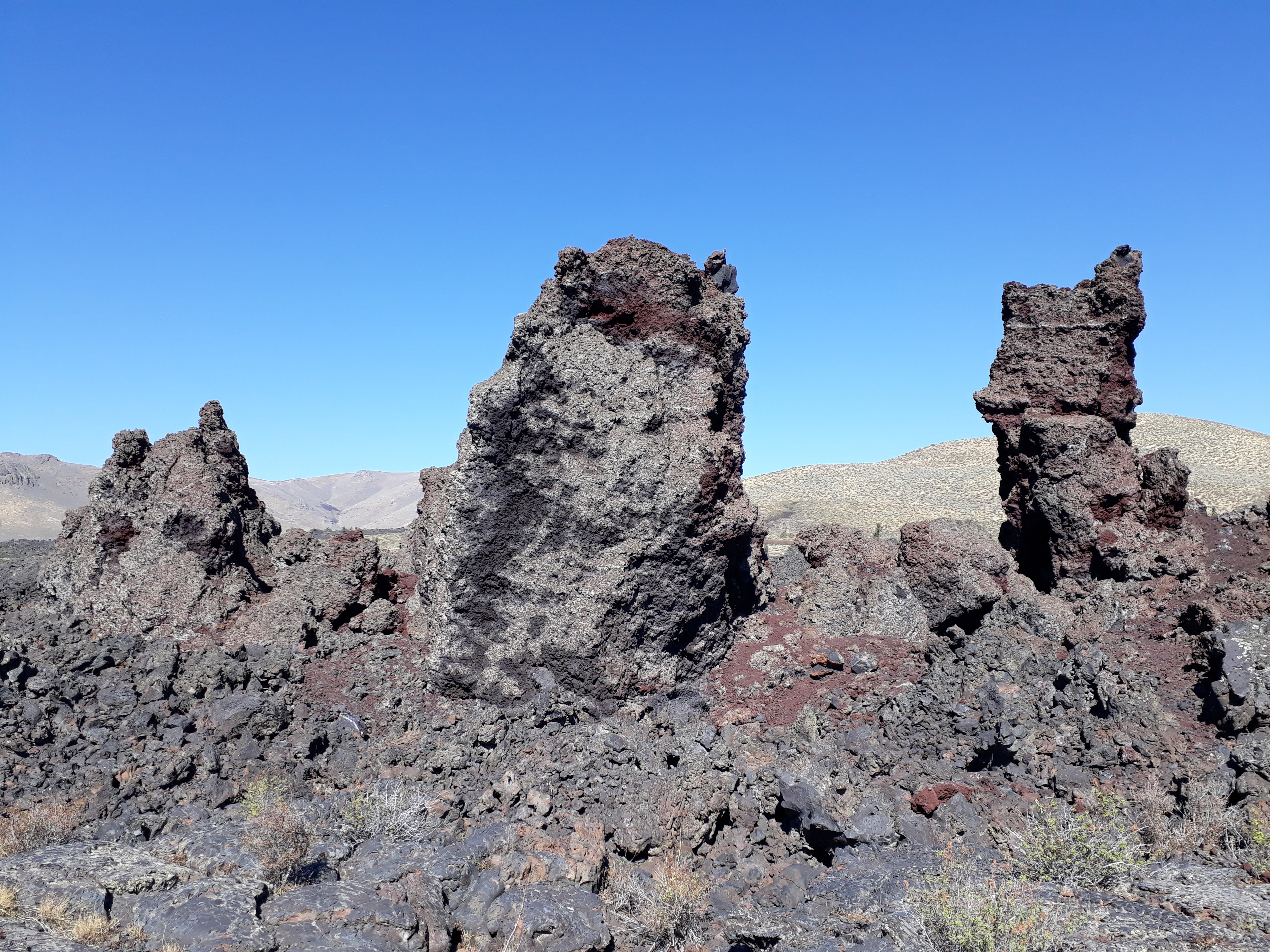 Rock Formations Of The Devils Orchard

Inferno Cone is one of the worlds largest basaltic cinder cones in the world.

From the parking area, you can take the trail up the side of the cone to sweeping views from the very top.

When we walked up, there was a very strong wind which made walking a challenge but the views are worth the walk. 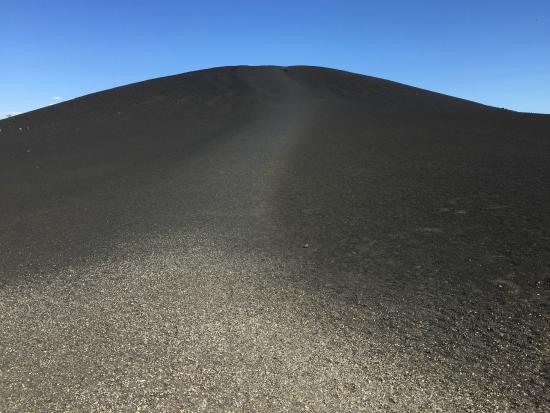 Inferno Cone, It’s Further To the Top Than It Looks

Take A Look Inside The Spatter Cones

Just a short drive from Inferno Cone you’ll come to the Spatter Cones.

These Spatter Cones are in fact mini-volcanoes that you can walk up and see inside of.

A surfaced path spirals around the outside and leads to the top of several cones. 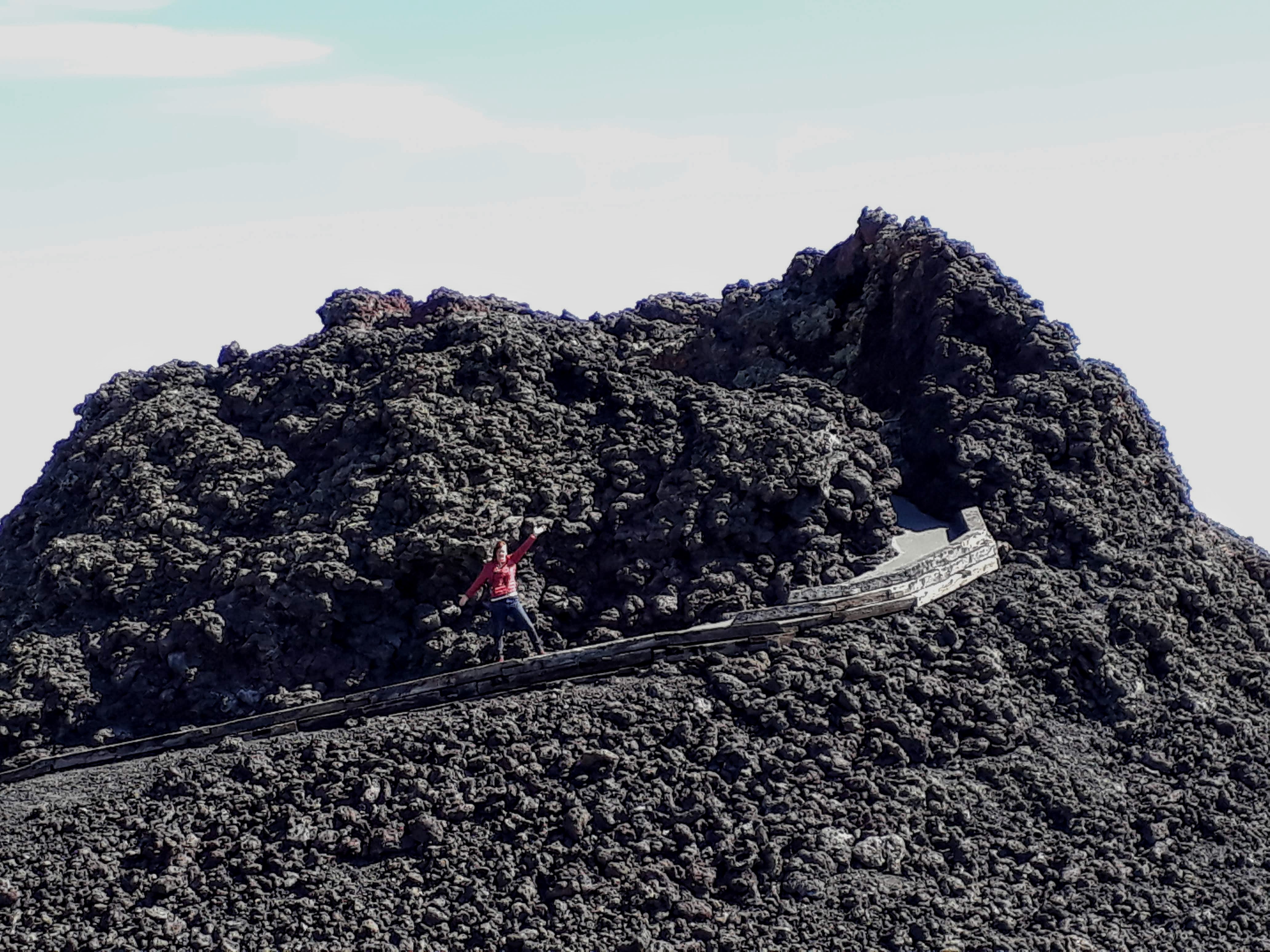 Sue Walking Up One Of The Spatter Cones

Hike To The Tree Molds

At the far end of the loop road, you can park and take a trail out to the Tree Molds.

Here you can see imprints of leaves and tree bark in the lava.

We walked the trail which is 2 miles long but it was very hot on the day and the trail is very exposed.

I had too much sun so decided to turn around before I reached the tree molds but Sue and Annabel got there but were disappointed by them.

If you do this hike on a sunny day even in Autumn ( we visited in September ) make sure you’re protected from the sun.

Let Your Inner Indiana Jones Out In The Cave Area

Following the loop road, the last major area you’ll come to is the cave area.

There are four caves that you can enter depending on how much of a challenge you want.

The caves are actually lava tubes that formed when molten lava flowed under the surface.

You must have permits from the Visitor Centre to enter the caves.

We decided to go into two of the four caves, Indian Tunnel and Boy Scout Cave.

Indian Tunnel is a very large cave with easy access down a staircase.

The interior is pretty big with an easy trail winding through the interior.

As it’s so large the sunlight penetrates the inside and keep it light so there’s no need for a flashlight.

There is an exit out of the far end which we took but it does involve a scramble over rocks to get out of an opening in the ceiling.

A marked trail then leads you back over the surface to the main path but be careful of holes. 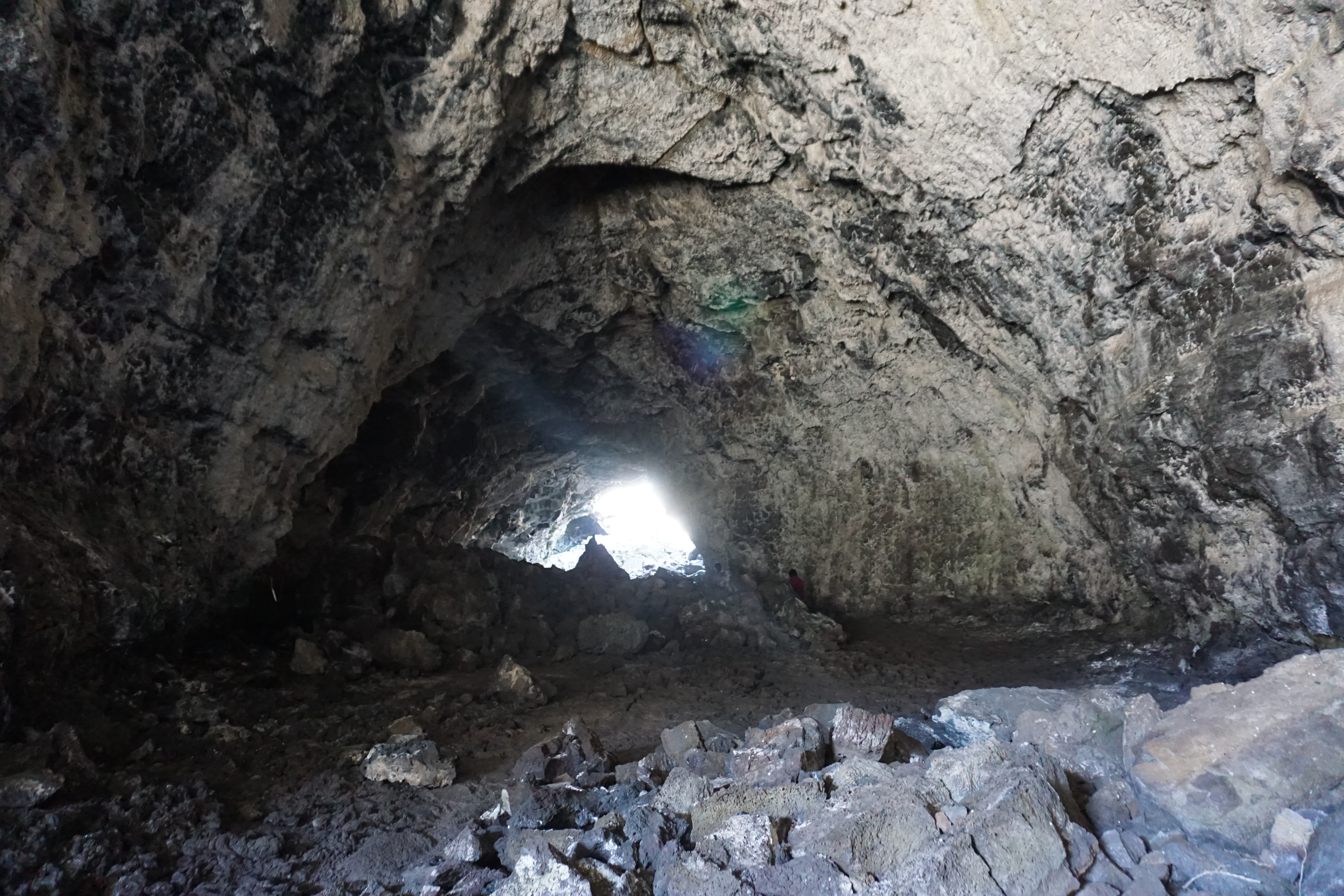 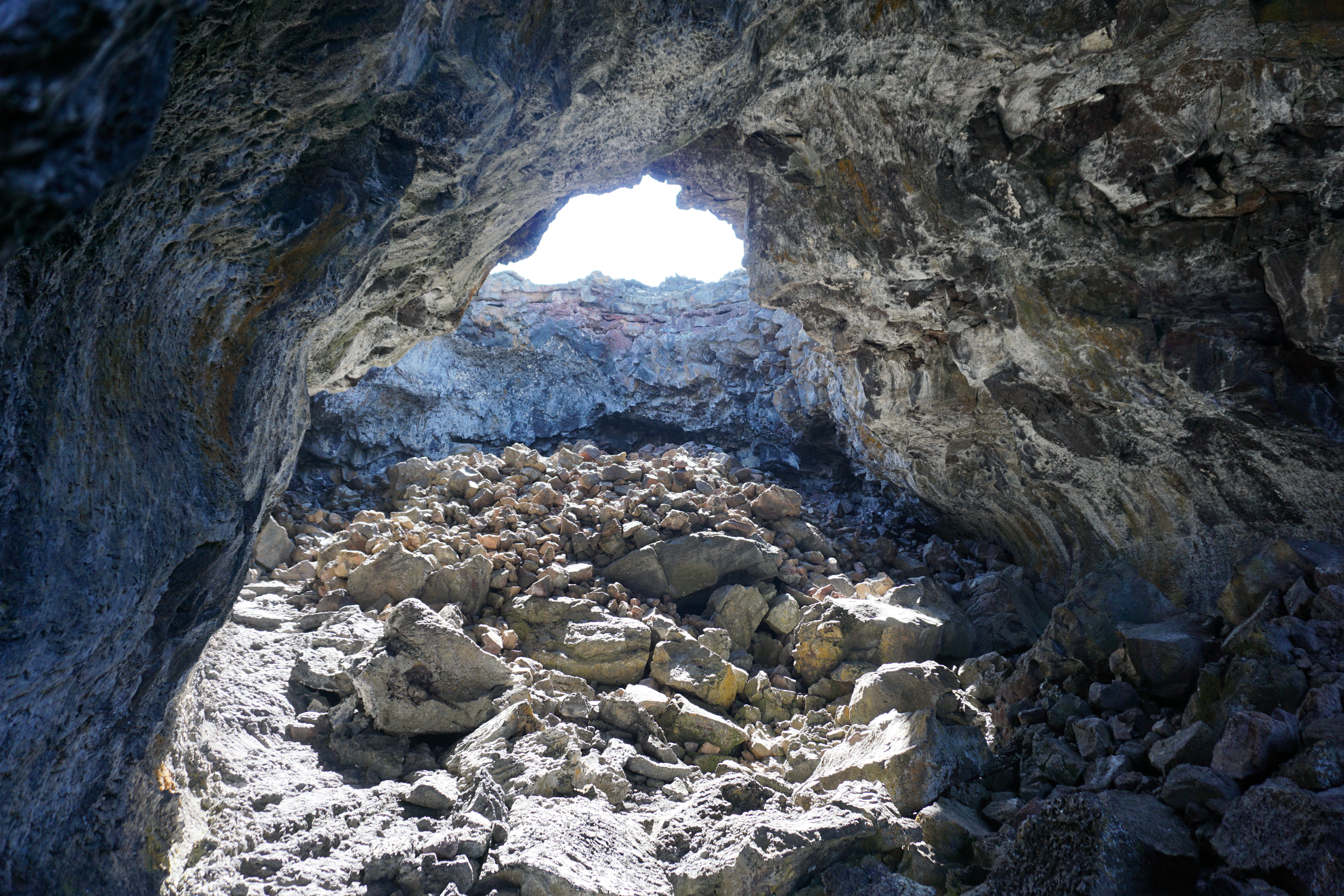 Boy Scout Cave is for the adventurous only.

It’s dark so you need head torches and you have to crawl through some of it.

Annabel and I decided to try our luck going through Boy Scout Cave.

The entrance is down through a small opening in some rocks which you have to scramble down.

The interior is pitch dark and it’s pretty hard to find your way through.

In fact, Annabel and I couldn’t find the proper route through so we ended up coming back out the same way as we went in.

It’s a petty cool thing to do if you’re feeling adventurous but don’t go in if you get claustrophobic at all. 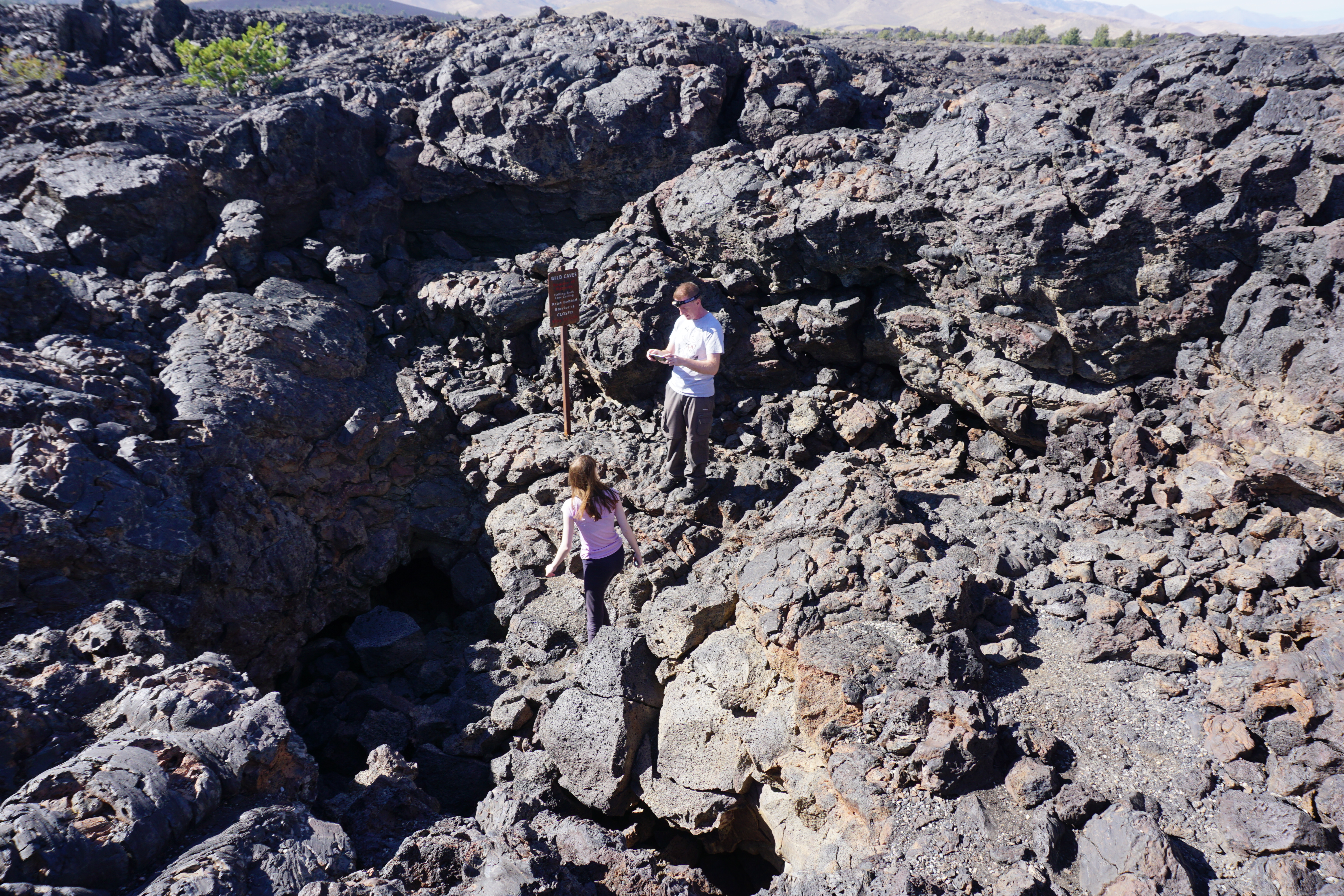 Annabel And I Approaching The Entrance To Boy Scout Cave 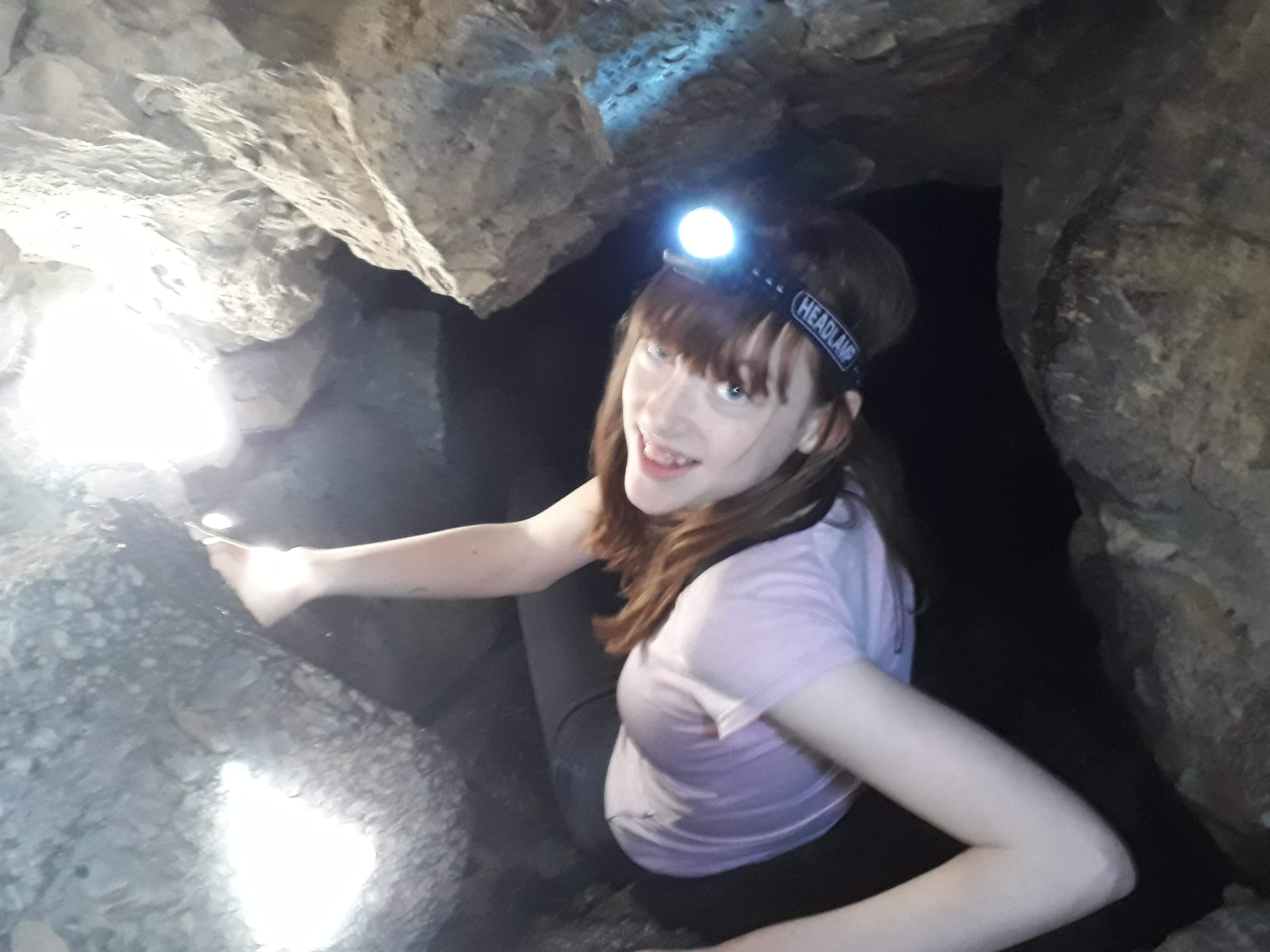 There was so much more to do than we thought on our visit to Craters of the Moon National Monument.

We were there most of the day and still didn’t do everything available.

One thing we would have loved to do if we visited again would be to stay into the evening.

You can stay in the park overnight at the RV and campground.

The park is designated as a Dark Sky destination with great views of the night skies, weather permitting.

We loved the trails through the lava fields as well a hiking up Inferno Cone and of course going into the caves.

Craters of the Moon is quite isolated but it’s well worth a trip out to explore. 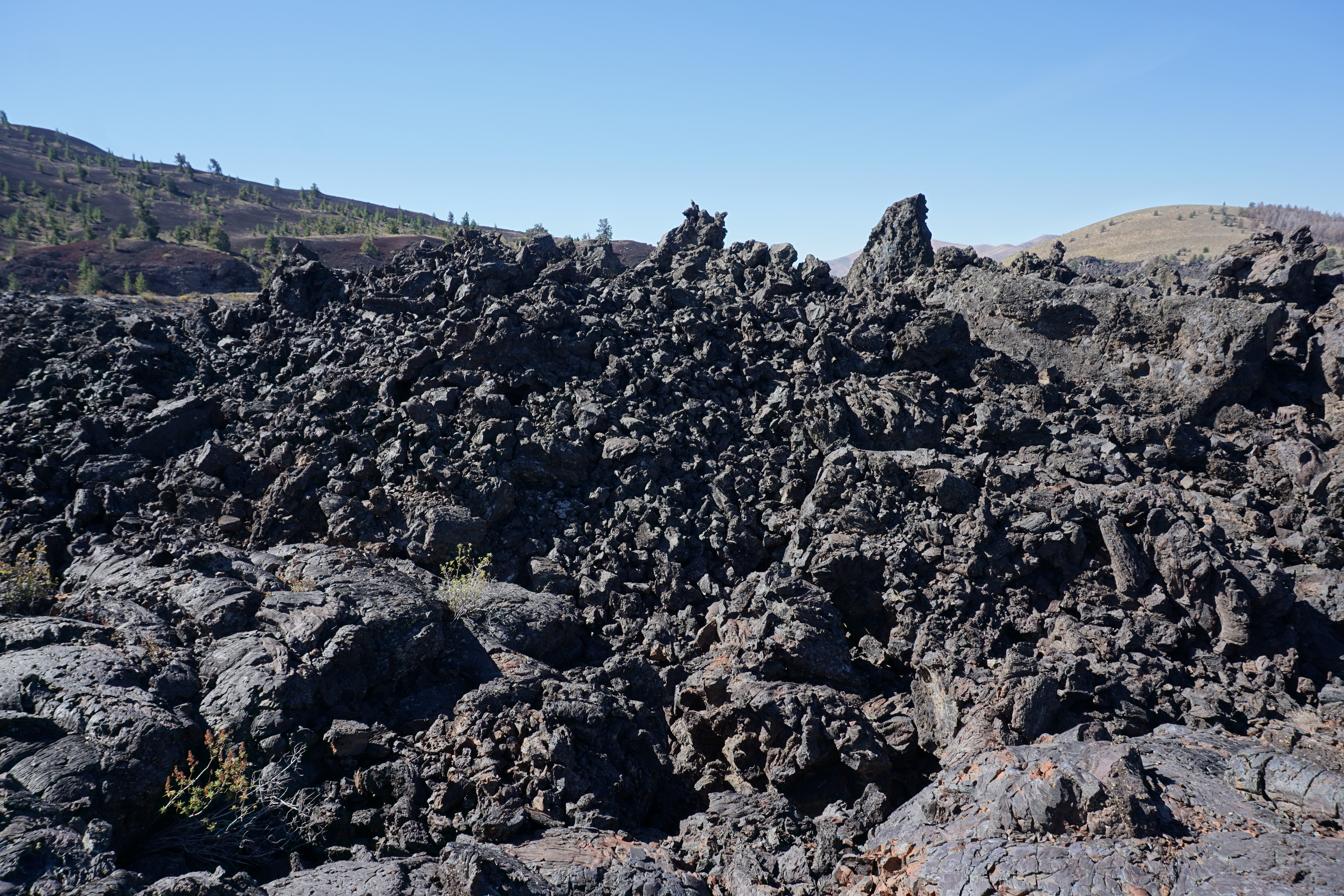 Getting To Craters Of The Moon National Monument

Craters of the Moon is situated along Highway 20 between Idaho Falls and Boise.

The park feels as though it’s pretty much in the middle of nowhere.

We stayed in Arco the night before our visit to Craters of the Moon.

Arco is a really interesting place that you can read about here but in terms of amenities, it’s quite limited.

We did find a motel that was OK for the night but don’t expect much.

There seemed to be only one place to eat in town which was called Pickle’s Place and was actually OK if you don’t go in with too higher an expectation.

If you have an RV or are camping you can stay at Craters of the Moon National Monument.

With the very dark night skies, this option would be great. 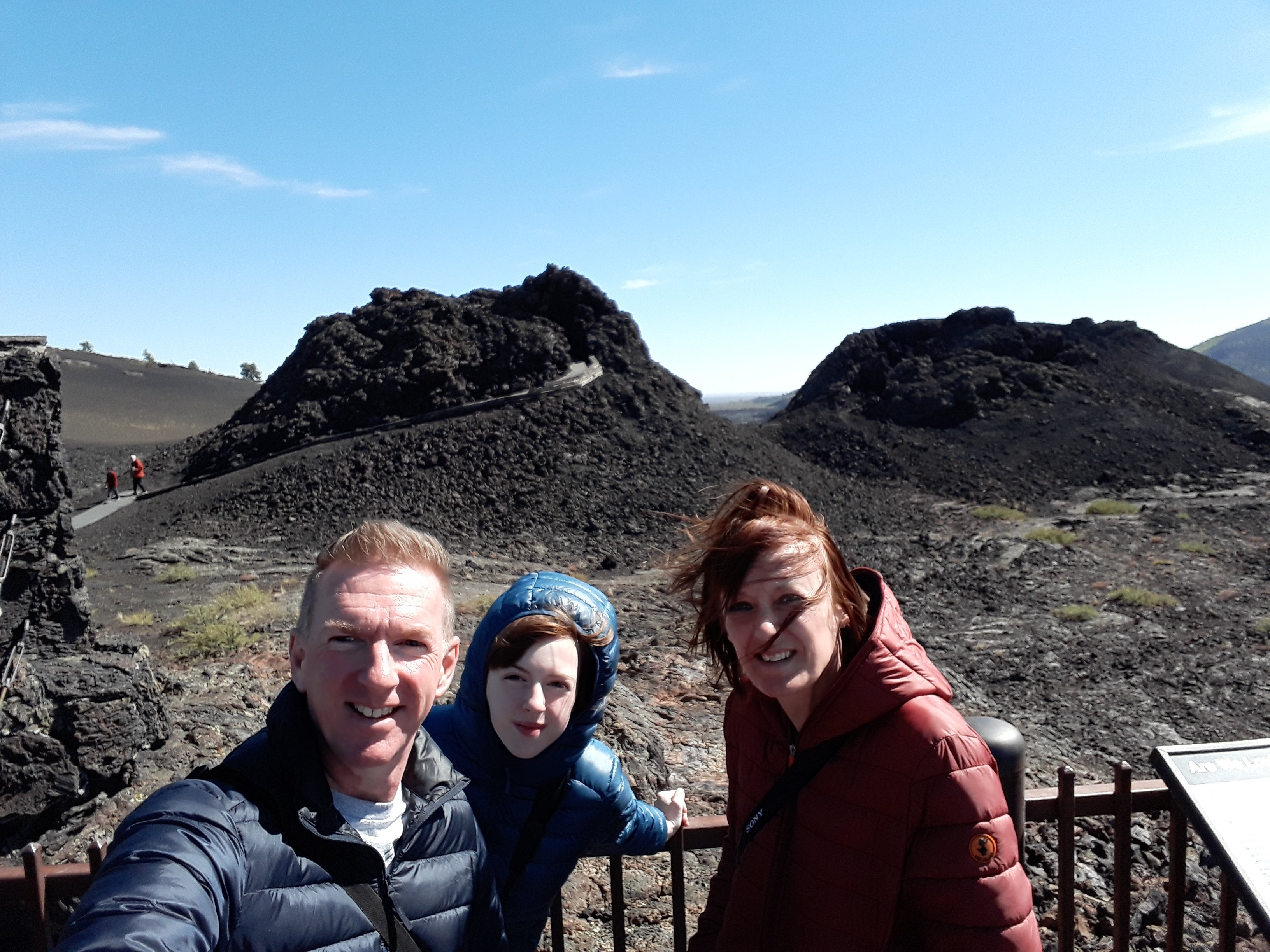 Us With The Spatter Cones In The Background