Our Guide To Chiang Mai Festivals

During our five month stay in Chiang Mai, Thailand we got to attend some pretty awesome festivals as a family.

In fact, what first brought us to Thailand was to attend a festival, and we enjoyed being in Chiang Mai so much we stayed.

There are many more Chiang-Mai-festivals that we haven’t experienced but we’re only going to write about the ones we have experienced.

While we were having our family adventure in Bali , we met a family that told us about this festival that was going to be held in Chiang Mai in the coming November.

It sounded amazing so we researched it a bit and planned our travel so that we would be in Chiang Mai for Loi Krathong.

Loi Krathong is a Siamese festival celebrated annually throughout Thailand but seems to be a bigger event in Chiang Mai than other Thai cities.

The festival takes place on the evening of the full moon in the 12th month of the traditional Thai lunar calendar which usually falls during November sometime and lasts for three days.

Although the festival is officially called Loi Krathong, it’s sometimes known as The Festival of Lights.

The name Krathong means ” to float a basket” and comes from the tradition of making decorated baskets (Krathong) to float down the river.

Leading up to the festival, ready-made Krathong are sold in the markets all over Chiang Mai.

There are lots of different designs from simple to really elaborate.

We bought our Krathong on the day of the festival from a market near to our hotel.

Traditionally the Krathong will be made from elaborately-folded banana leaves, flowers, incense sticks which symbolise purity and sympathy, a candle which is a symbol of knowledge and wisdom and sometimes a coin will be added as an offering to the river spirits. 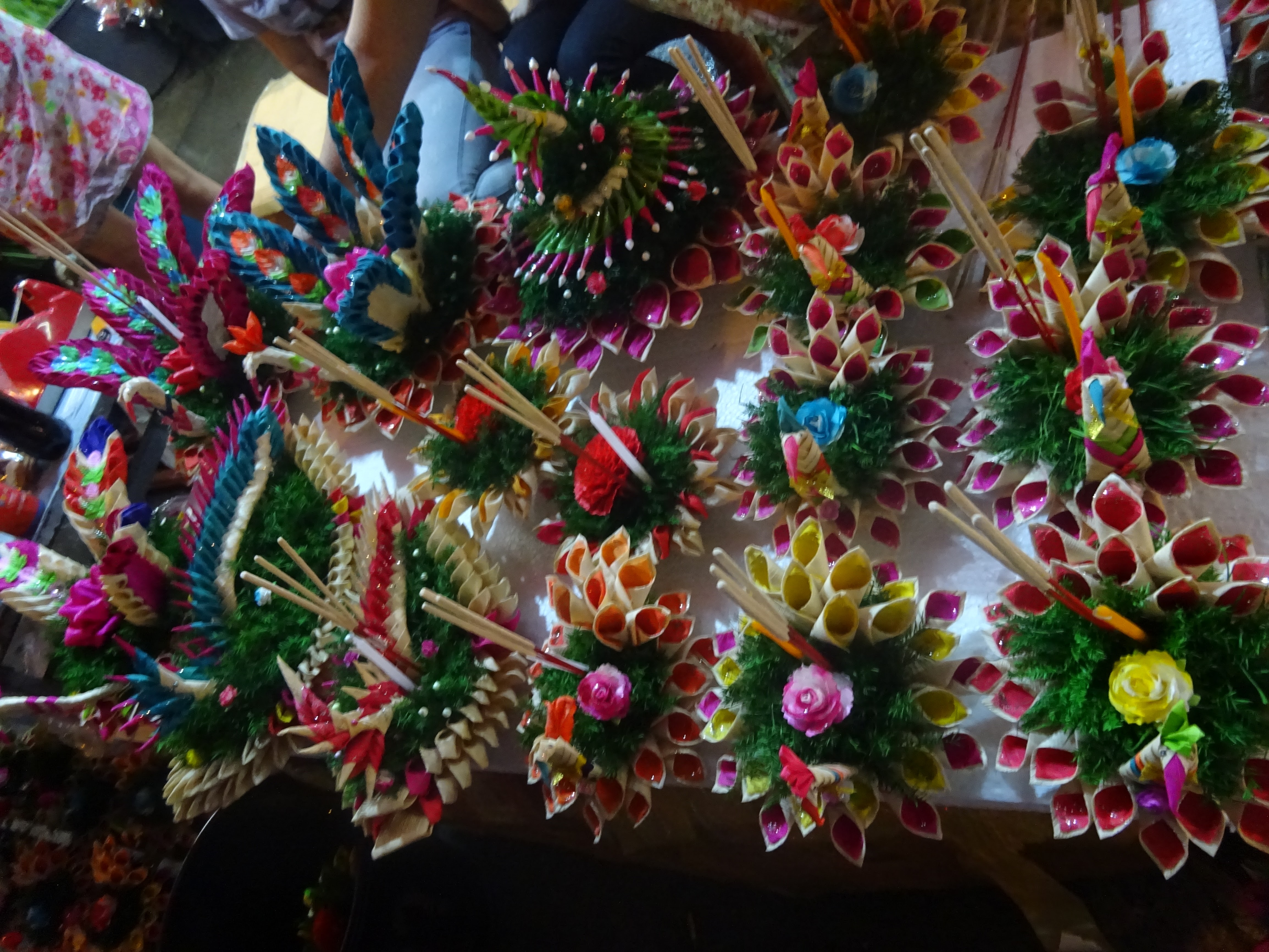 On the evening of the festival, we made our way to the banks of the Ping River, to join the crowds launching their Krathong.

The population of Chiang Mai swells with people coming into the city for the festival.

The crowds are huge around the riverfront area but we found a spot where we could launch our Krathong.

Hundreds if not thousands of lit Krathong floated down the river.

A Thai family lent us their lighter to light our candles and incense sticks.

We were on some steps with the river flowing past us but it was quite a reach to get our Krathong down to the water.

As we launched it, we silently made a wish and let it go to join the other twinkling lights floating away into the distance. 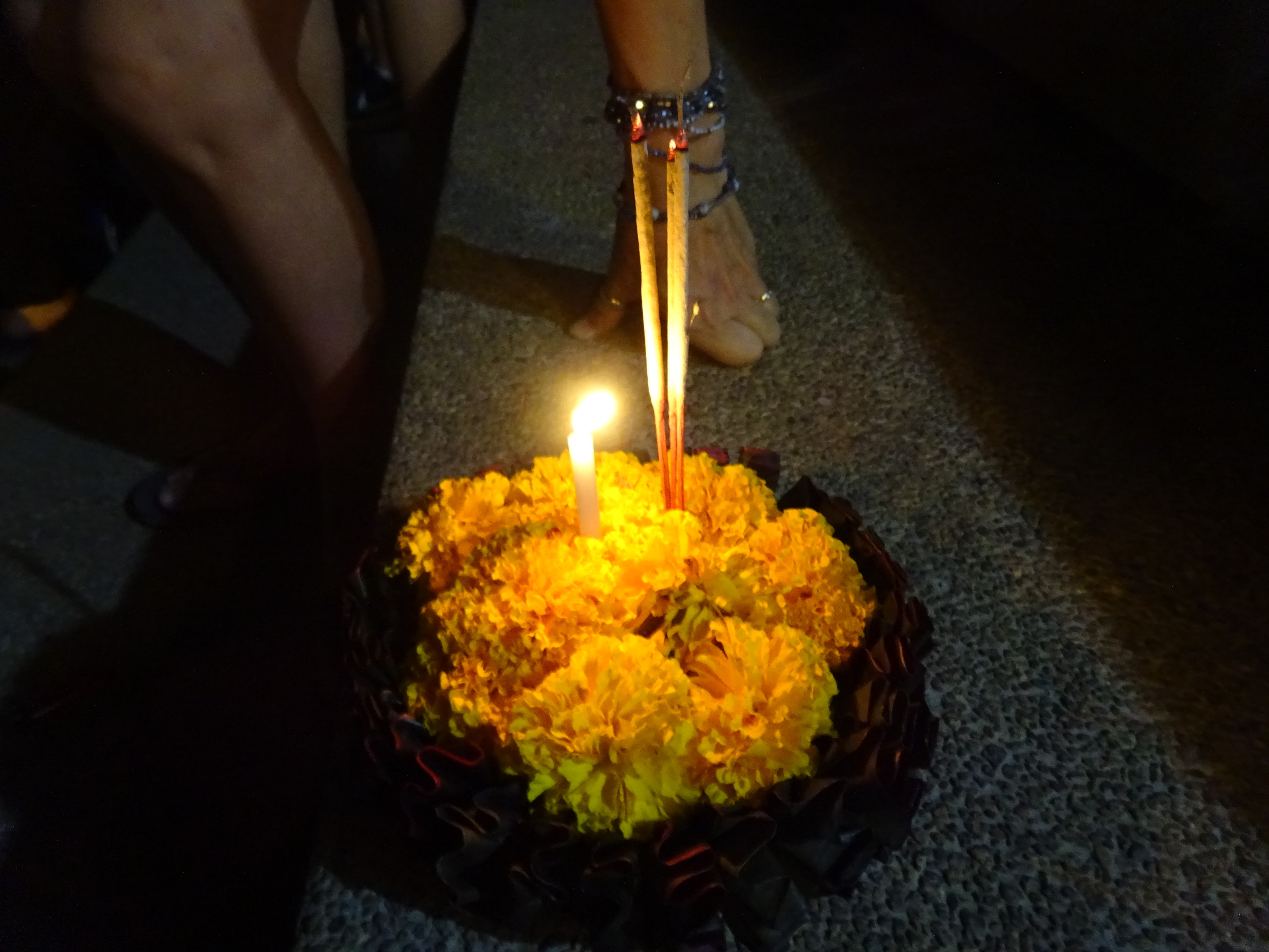 Ready To Launch Our Krathong

Krathongs were not the only things being launched.

People were also launching lanterns into the night sky from the bridge that crosses the Ping river. 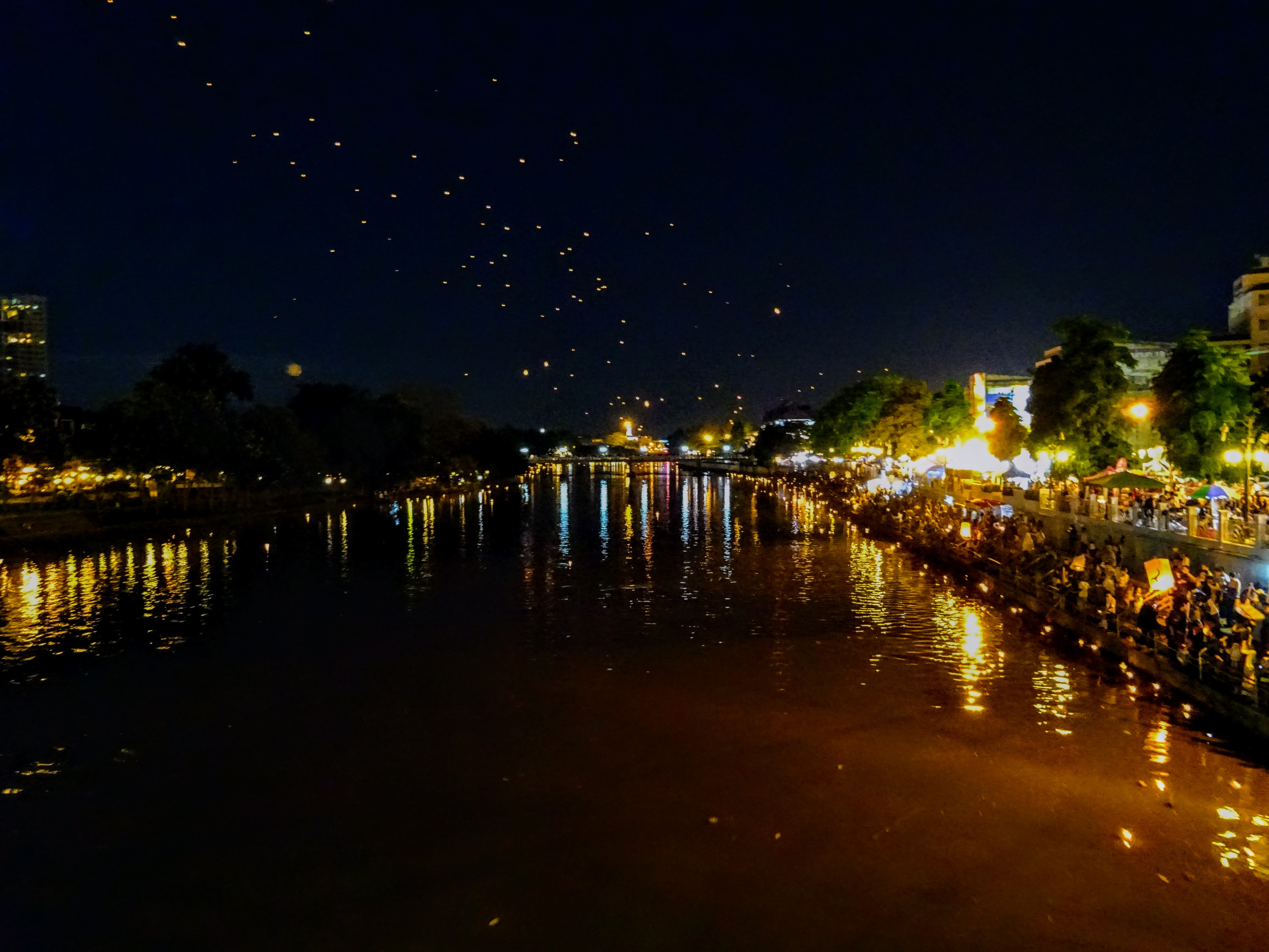 The Ping River With Krathong And Lanterns

Although the event was amazing, there was a smaller event that was the main highlight for us.

As we walked back through the Old City we passed  Wat Phan Tao which is a beautiful wooden temple in the heart of Chiang Mai.

We could see that lots of people were congregating around the temple so we went to investigate.

As it was a full moon the monks at the Wat, held a special service on the grounds of the Wat, under a huge tree by the side of a pond.

The tree was lit up and hundreds of candles covered the ground.

A procession of orange-robed monks made their way to the tree where they sat and began chanting.

It was such a magical and peaceful atmosphere, listening to the service in such an amazing environment. 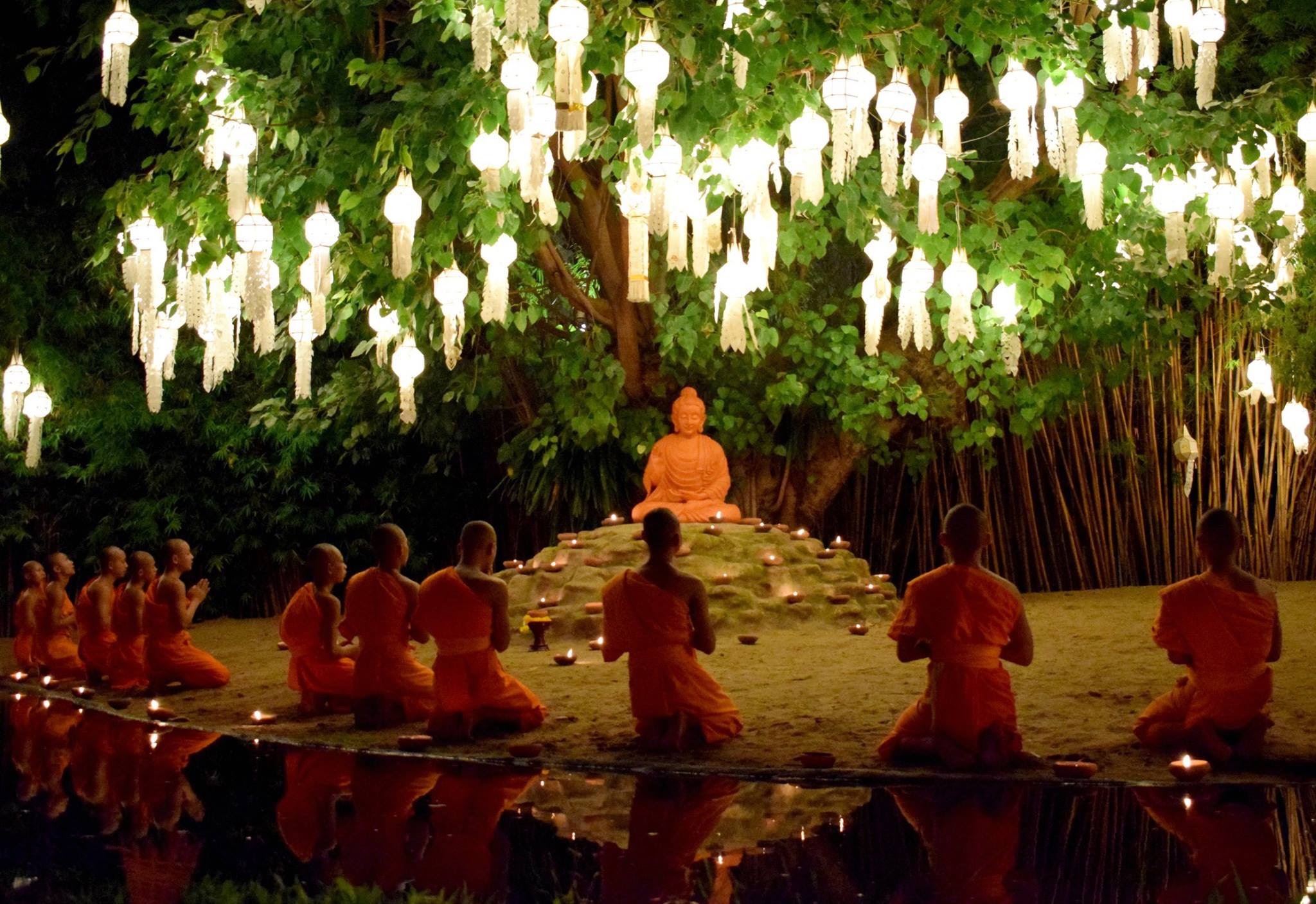 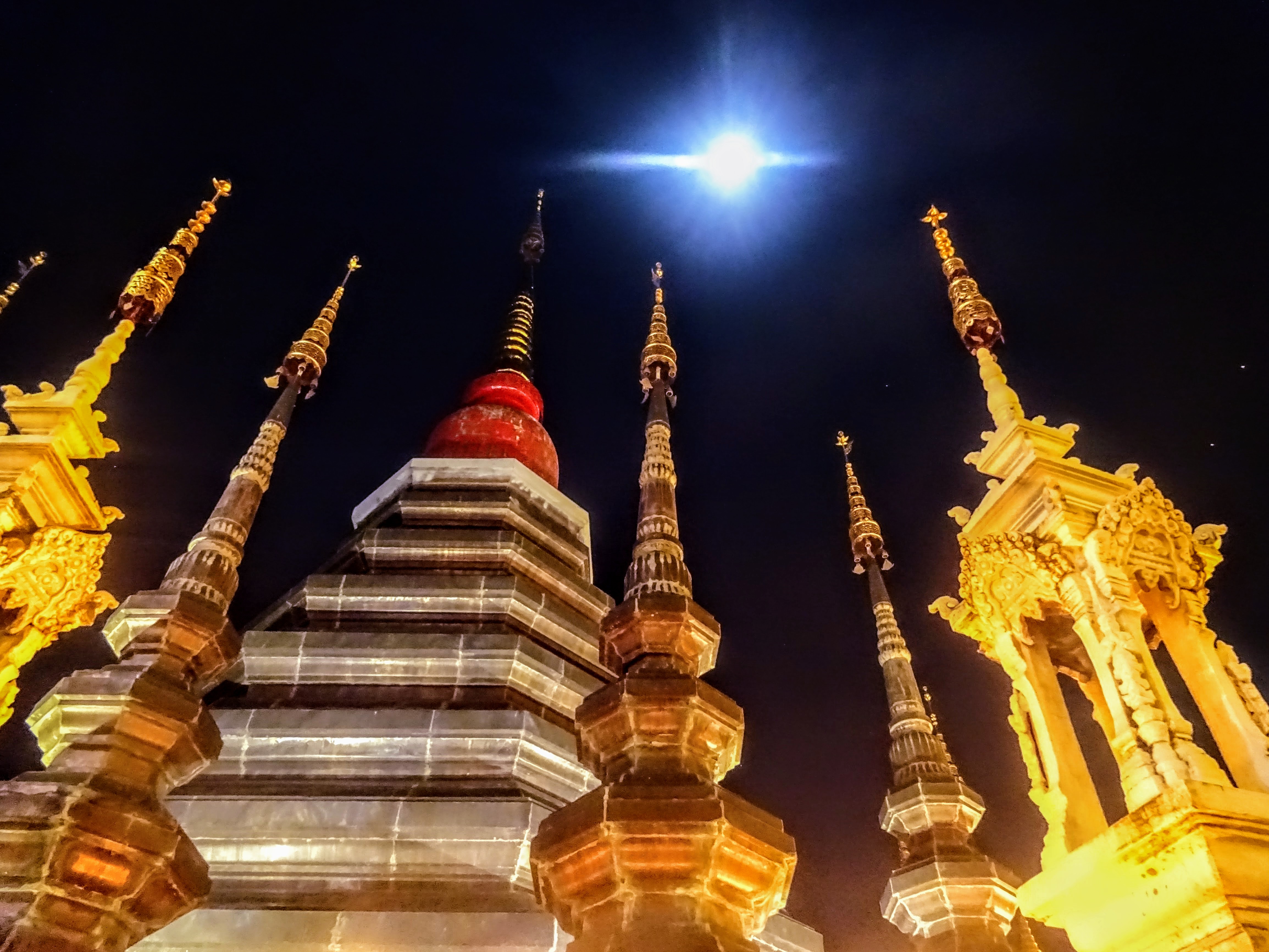 Chiang Mai park gets dressed up for a glorious showcase of plants, flowers and stage performances.

We didn’t know what to expect from the show and thought it sounded a bit boring but we couldn’t be more wrong.

The park is decorated head to toe in fantastic flower displays, lighting and plant sculptures.

There’s a flower contest, a food festival and a light show every evening. 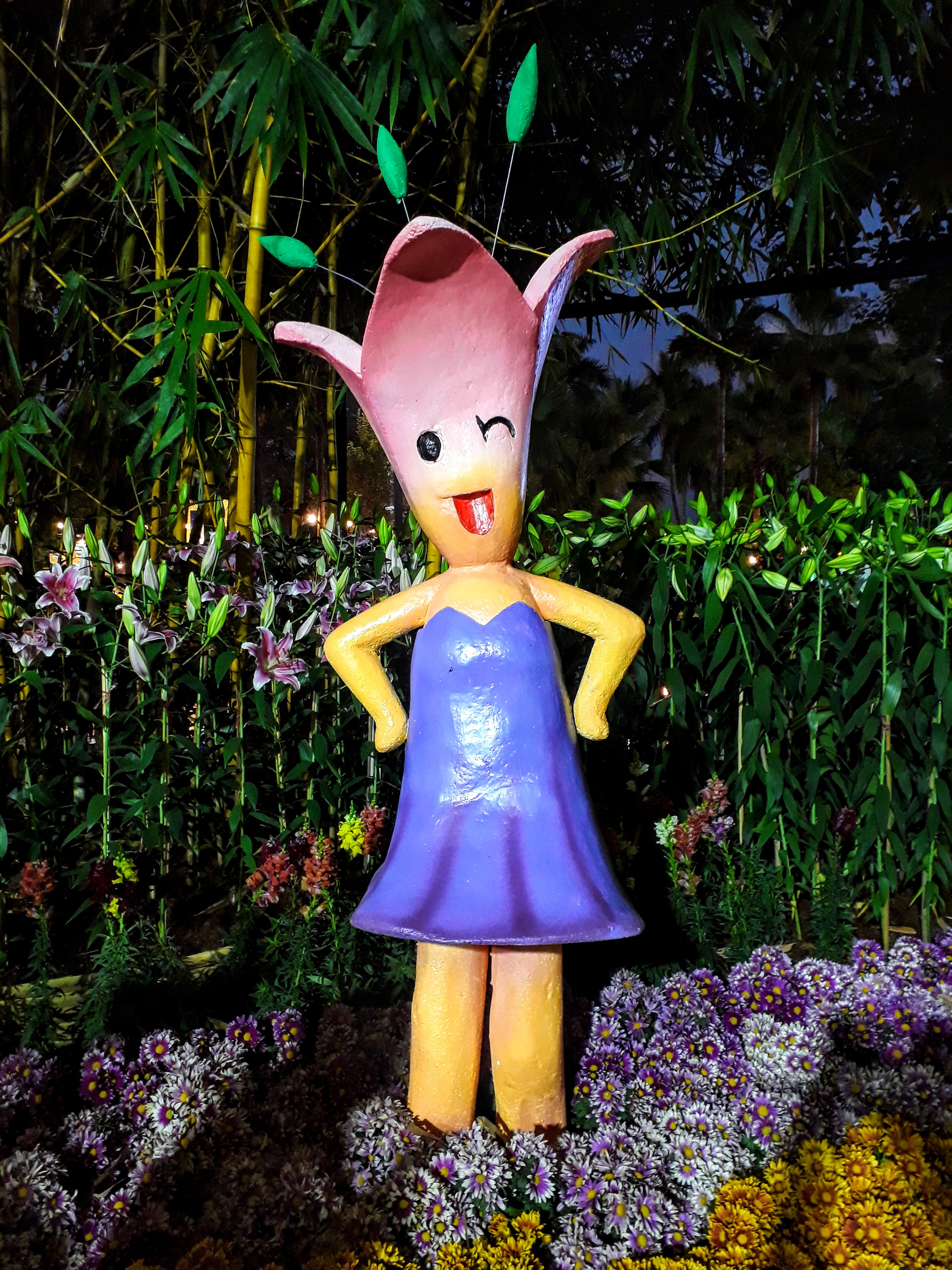 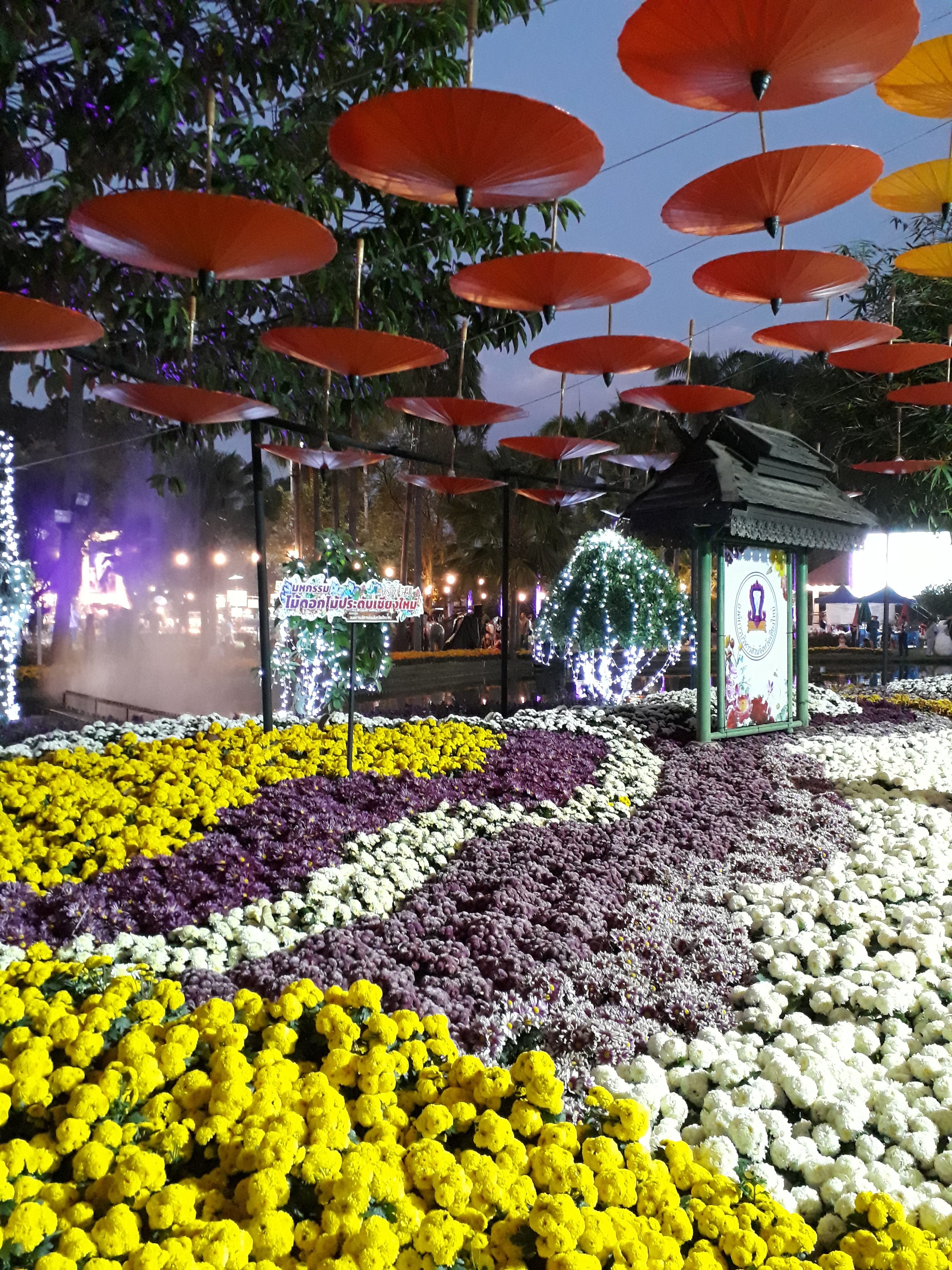 A large stage was set up in the park, where performers including singers, dancers and musicians put on shows.

There’s also a big float parade that drives down Thanon Arak before arriving at the park.

The floats are amazingly decorated with colourful sculptures and flowers. 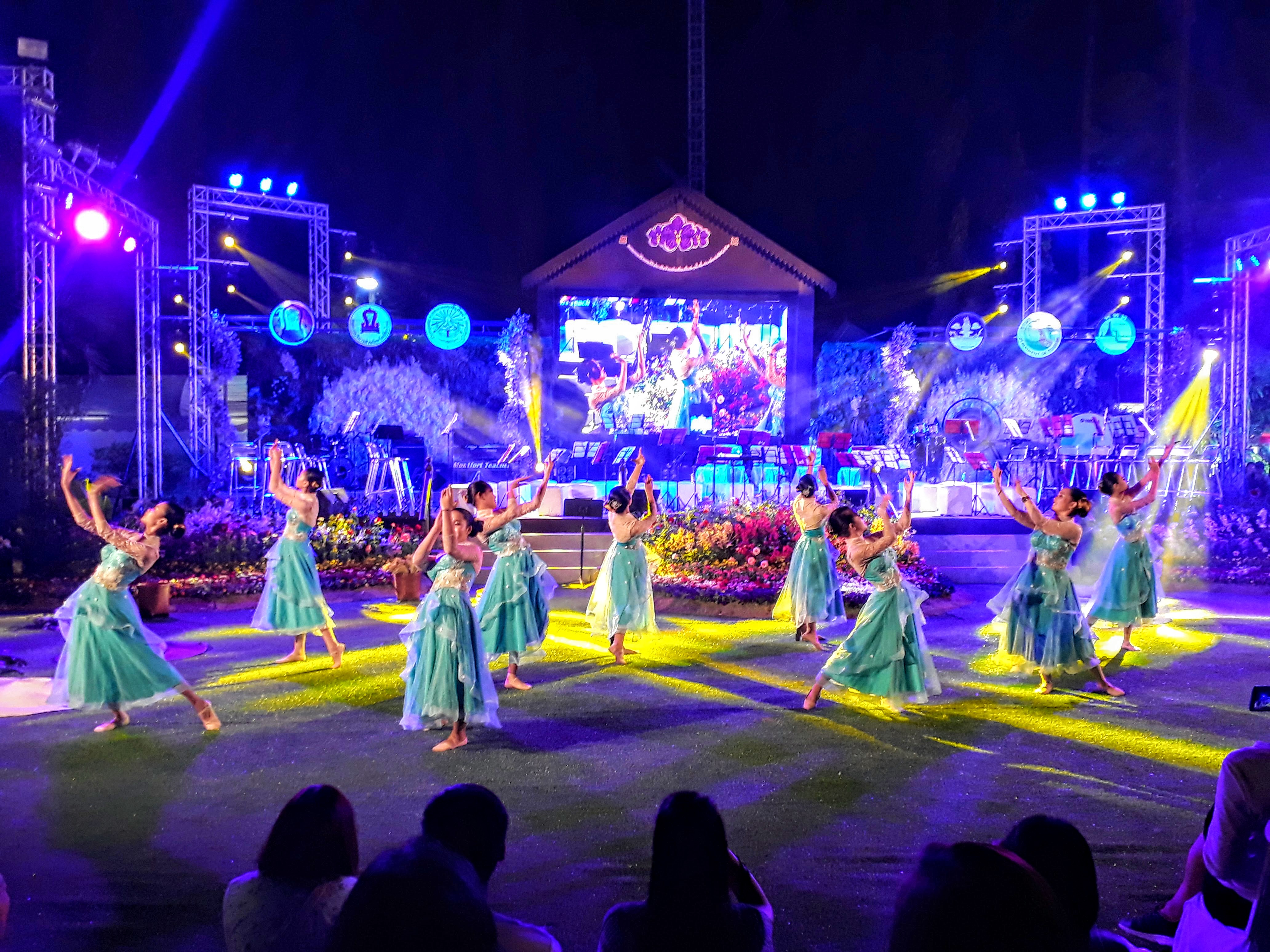 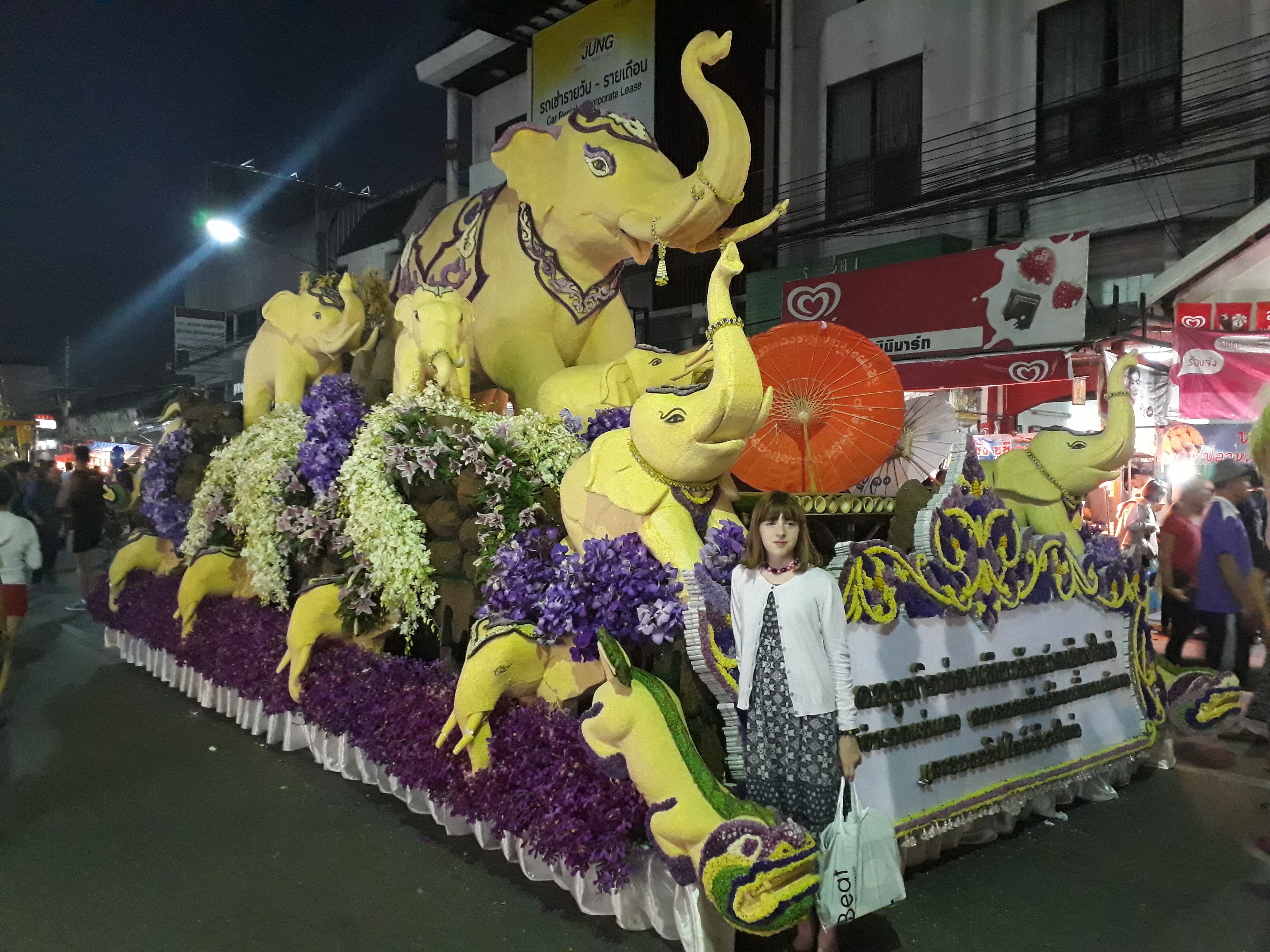 Don’t worry, there are no real elephants involved in this display to bring awareness to the conservation work to save Asian elephants.

Elephant Parade, tour their decorated life-size baby elephants to cities all around the world.

Hundreds of colourfully painted elephants are placed all around Chiang Mai either in groups or singularly.

The designs are beautiful and we definitely, each had our favourites.

If there isn’t a tour going on when you visit Chiang Mai, you could pay a visit to Elephant Parade Land to take a look at the work the group does and see the elephant garden and museum. 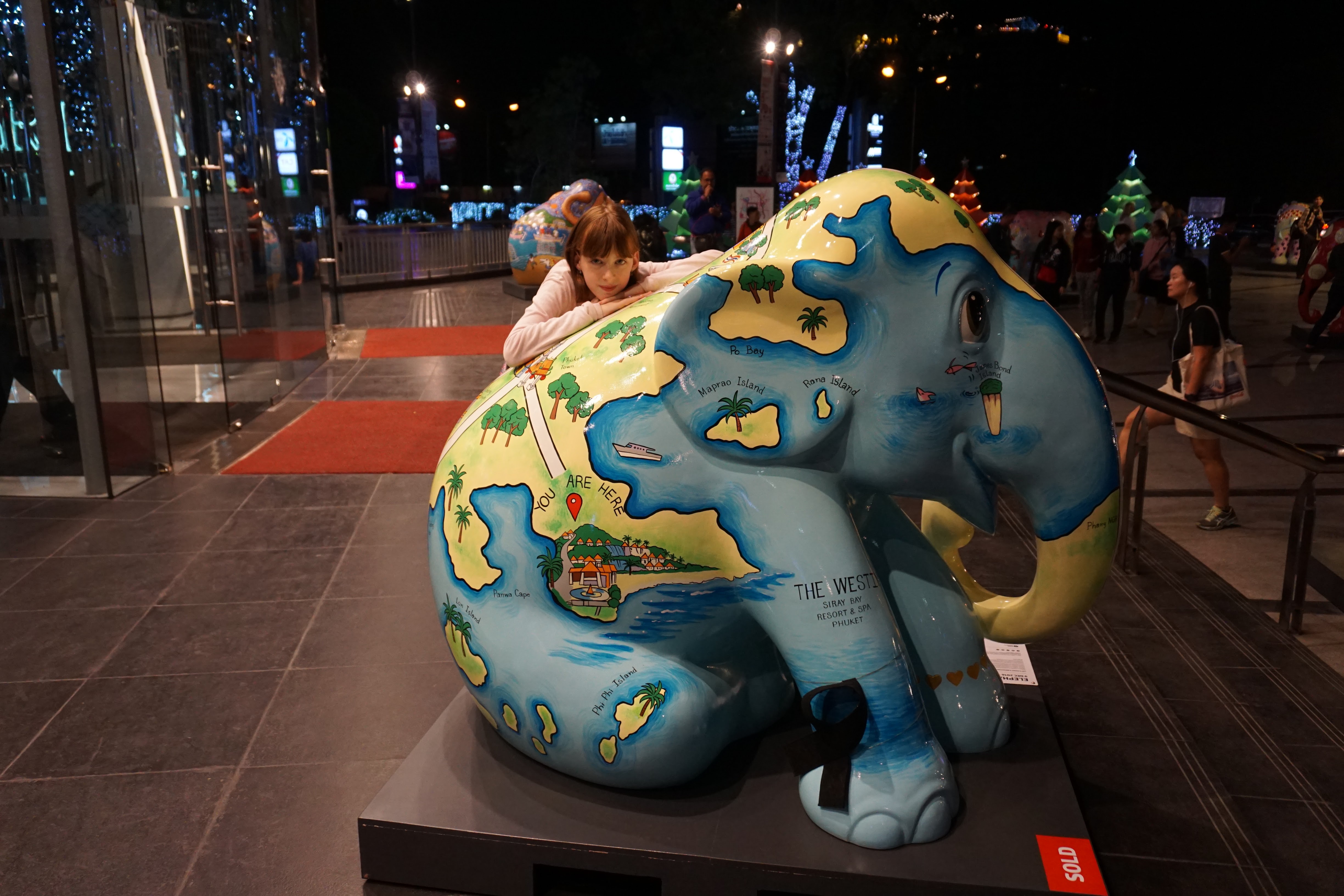 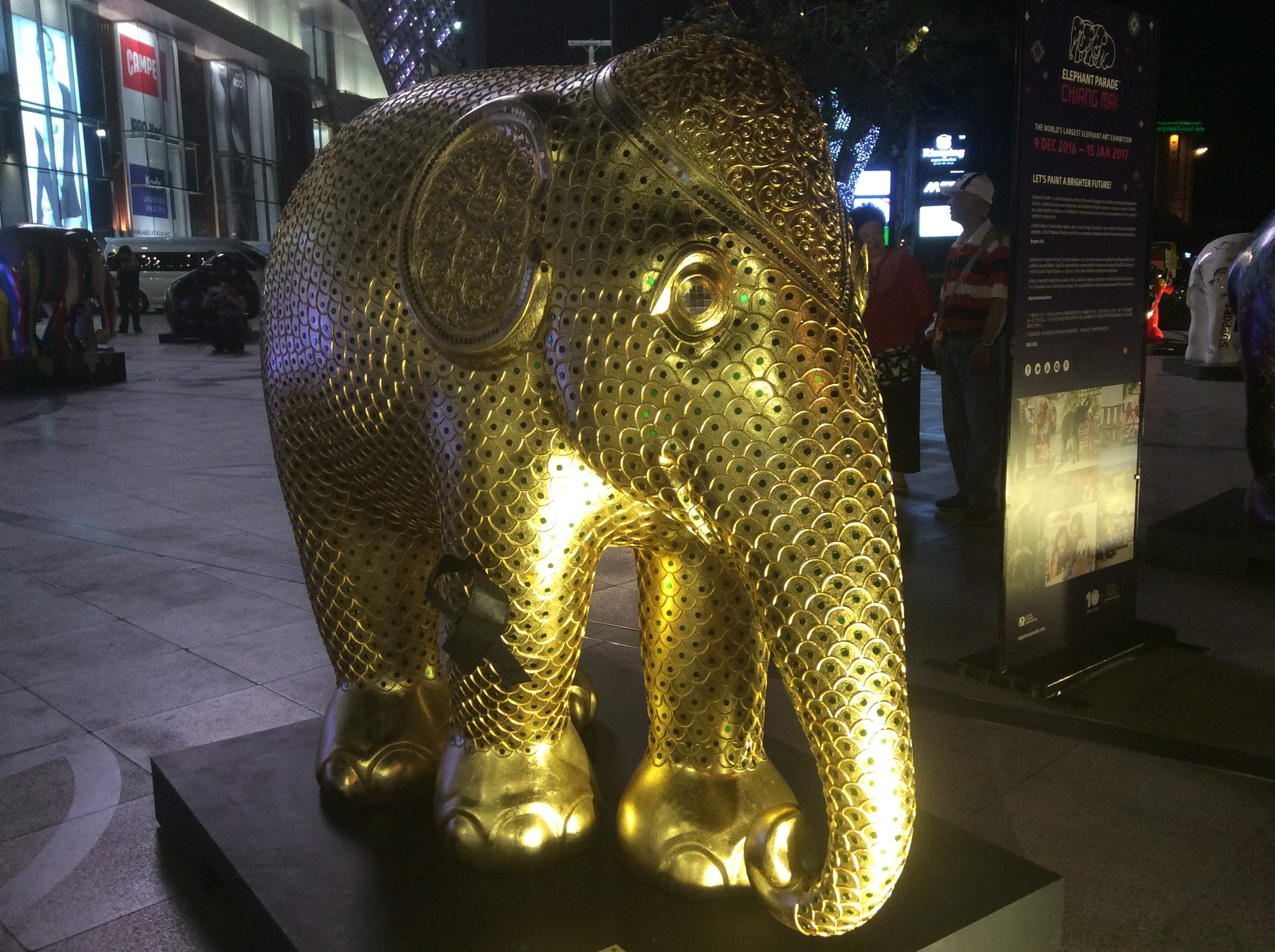 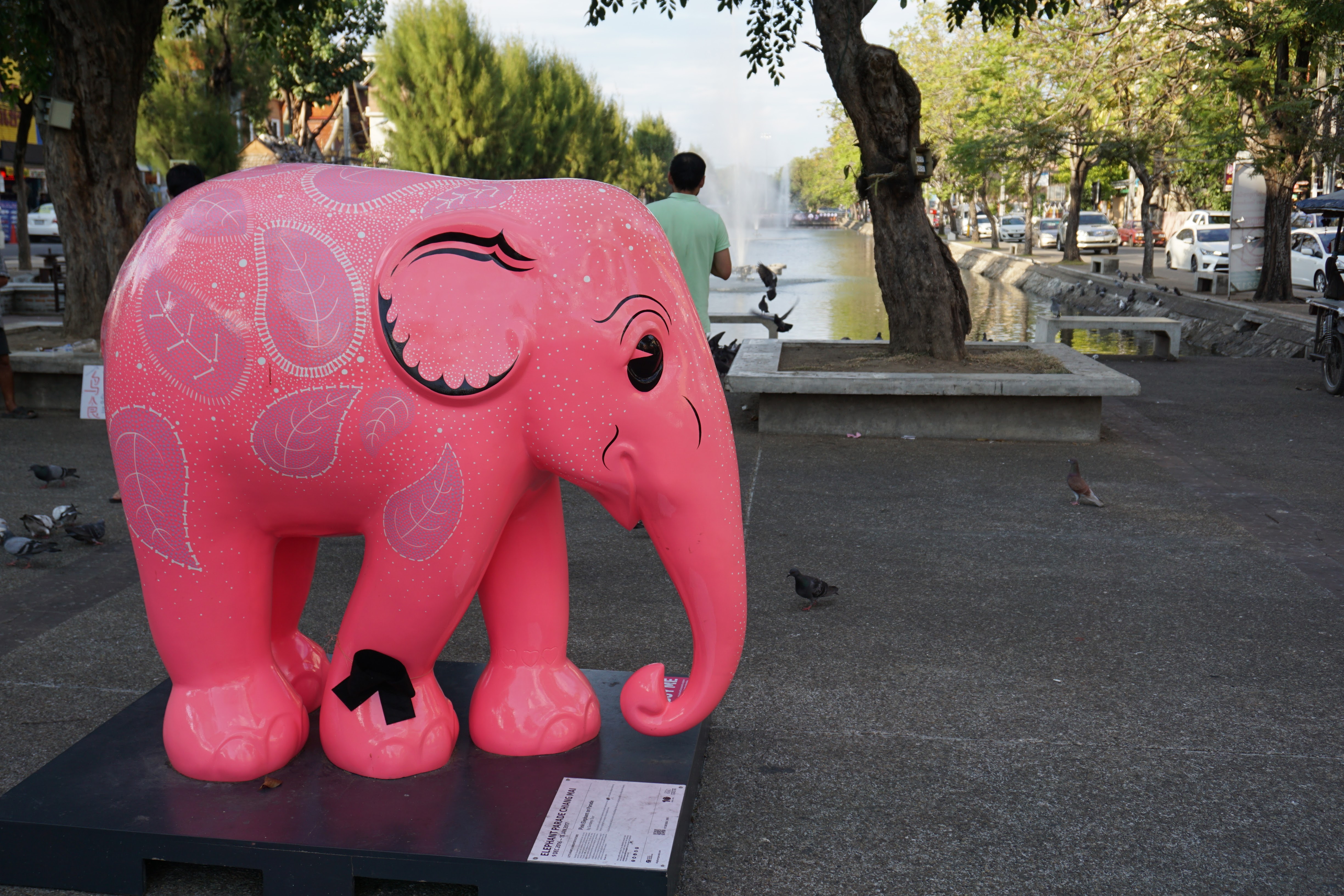 Although Christmas is not a recognised holiday in Thailand with the majority of the population being Buddhist, it is embraced in most large cities including Chiang Mai.

Decorations and trees go up in the shopping malls as well as the larger stores selling decorations.

The atmosphere was low key when we were visiting as the former King of Thailand had not long passed away and the country was officially in year-long mourning.

So although there was definitely some festivity, it wasn’t as much as normal years as they weren’t supposed to show too much revelry.

We did manage to buy an artificial tree for our room and decorate it quite festively though.

As far as Christmas food goes, there’s a Marks and Spencer in The Central Festival Mall that does sell very expensive Christmas pudding, mince pies and Christmas crackers.

We booked a table at Le Meridien hotels restaurant where they were serving a lovely buffet dinner with turkey and all the trimmings. 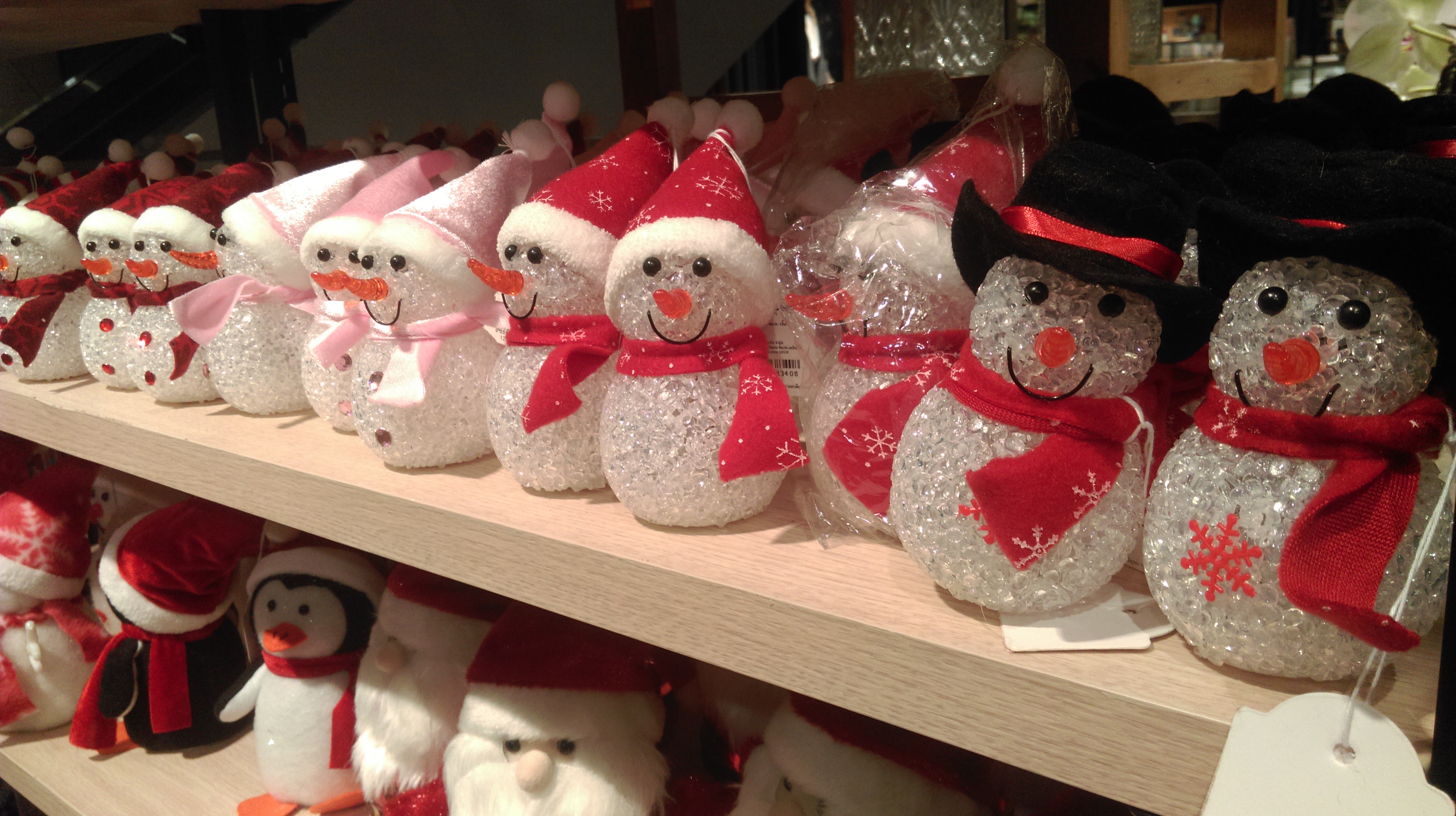 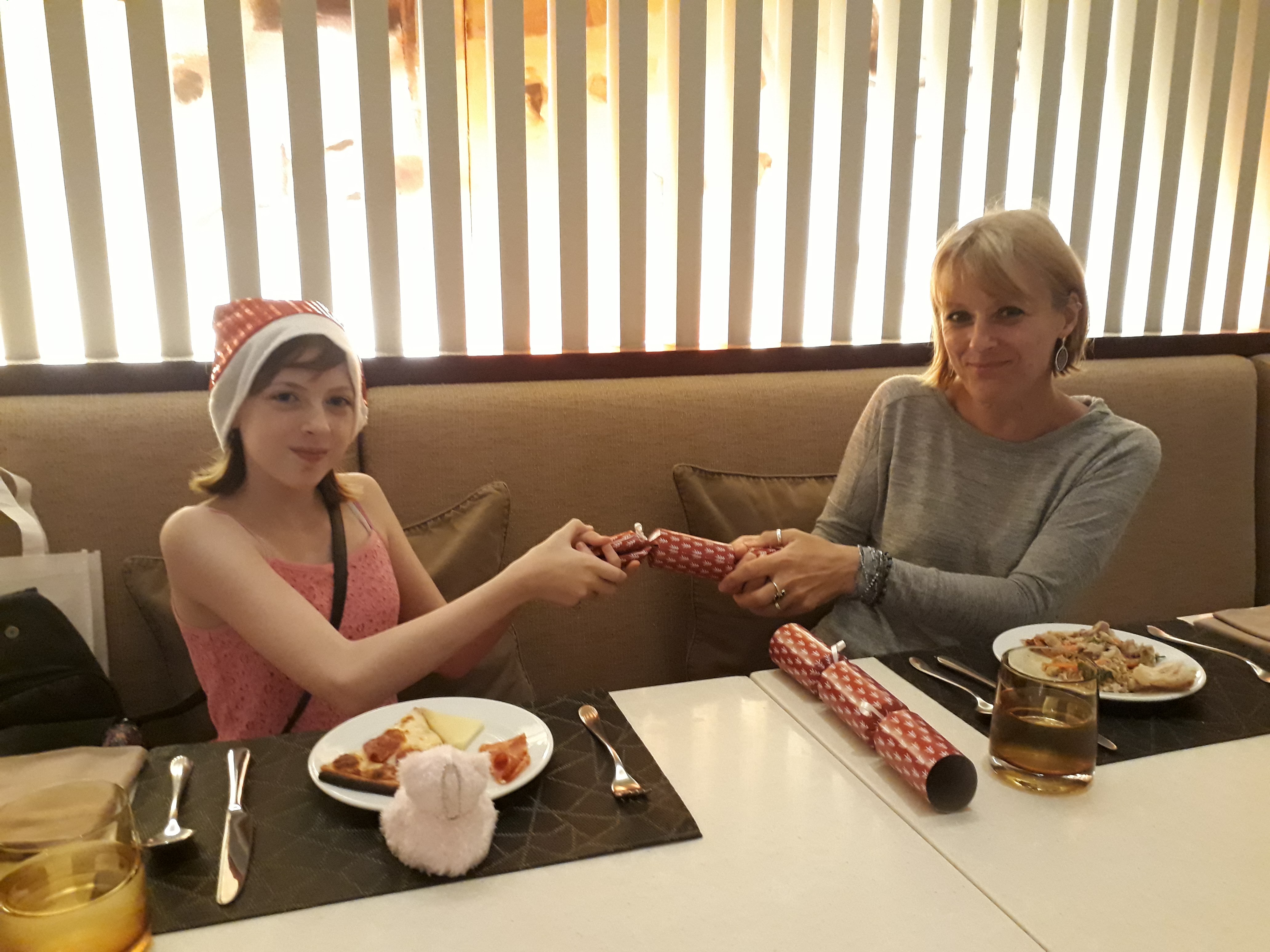 There were two big public events going on in Chiang Mai for the New Year when we were there.

Again, because of the Kings death, things were probably a little quieter than they might be normally but here’s what we experienced.

The main event was in the centre of the Old City by the three kings monument, where a big stage had been set up.

Dancers, singers and other performers took to the stage as well as a lot of public speeches made by dignitaries.

The second event was taking place out at the Tha Phae gate at midnight, where everyone would be launching paper lanterns.

We joined in the countdown and launched our own lantern into the night sky.

You can read all about our Chiang Mai, Christmas and New Year here. 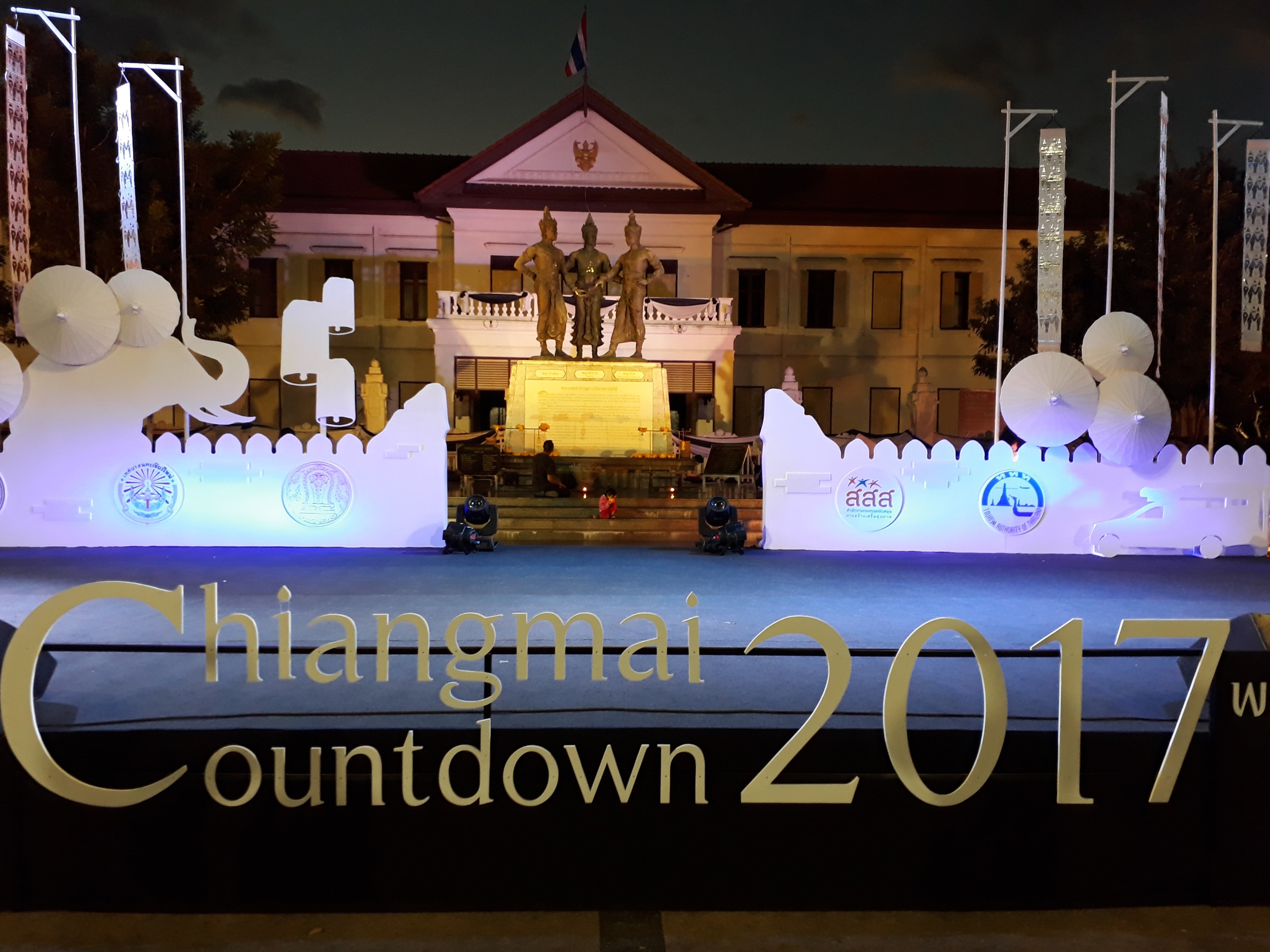 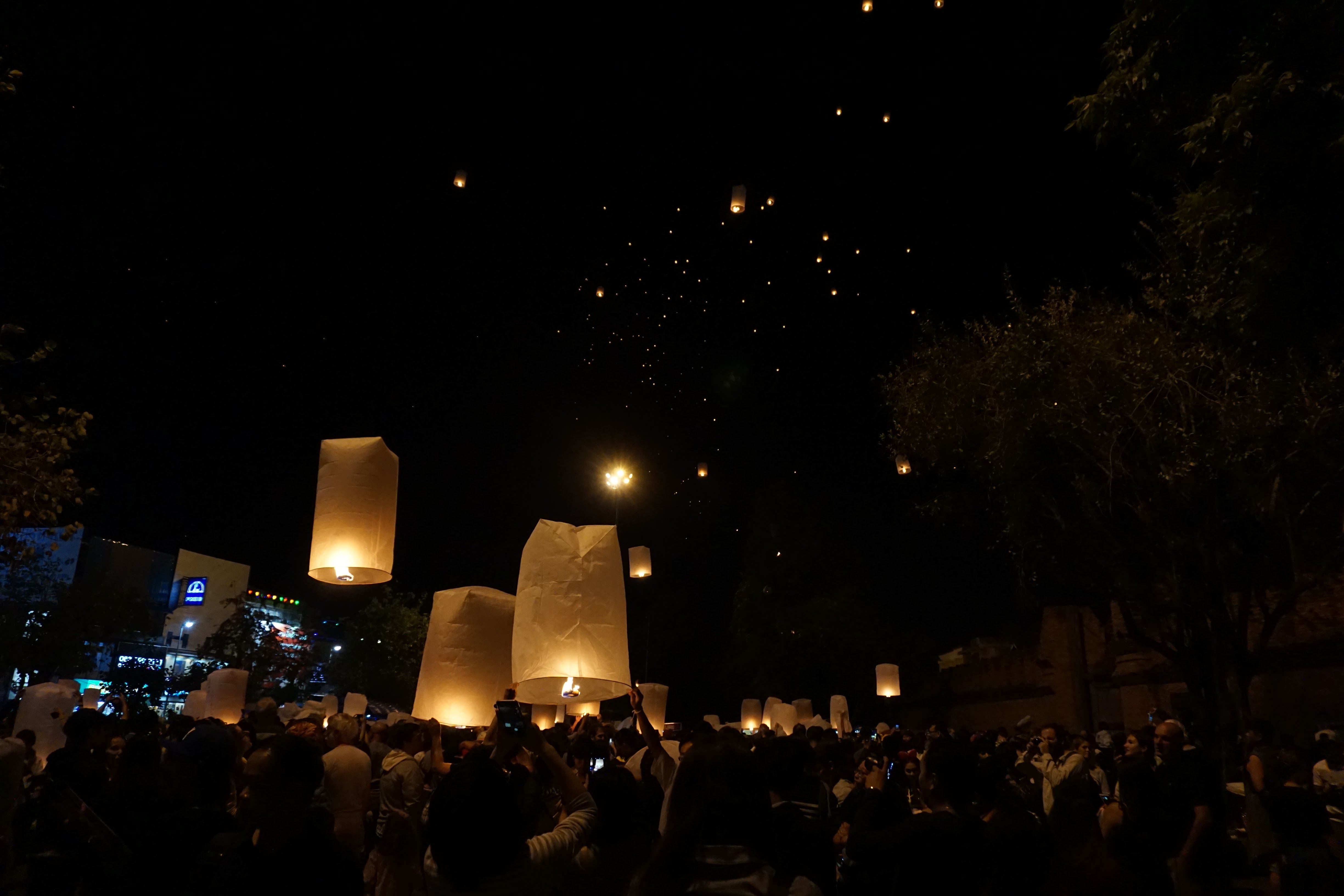 There’s quite a large Thai Chinese population in Chiang Mai so Chinese New Year is celebrated.

Taking place in Chiang Mai’s China Town, the area is festooned with red lanterns and other Chinese decorations.

Annabel and I went along to watch the stage show that included a talent show, dancing and other entertainers.

The highlight of the event though was the huge Chinese Dragon and acrobats that amongst other feats, climbed a huge pole very high into the air with the dragon which sprayed firecrackers out of its mouth.

It was a very colourful and lively festival which we both really enjoyed. 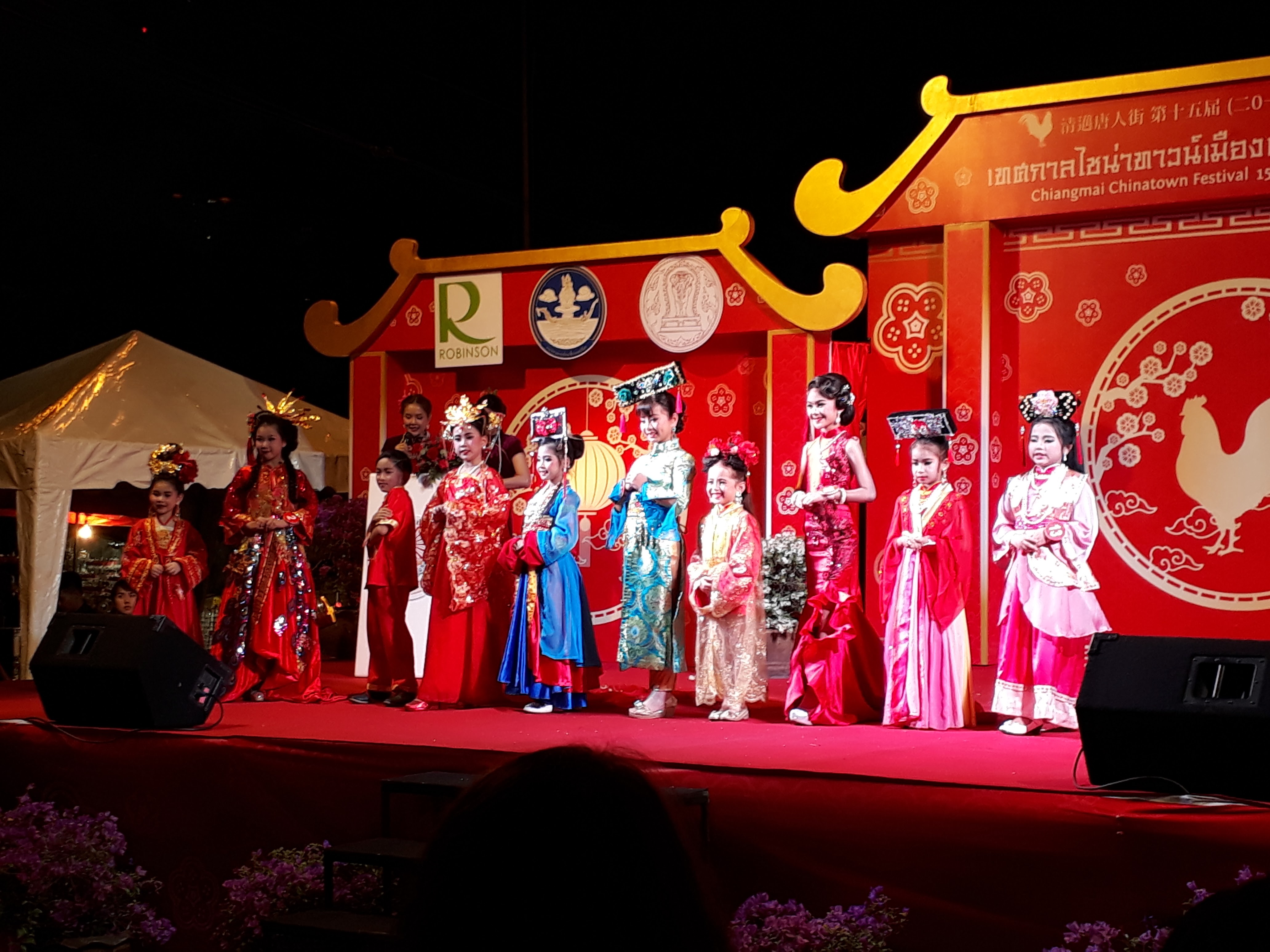 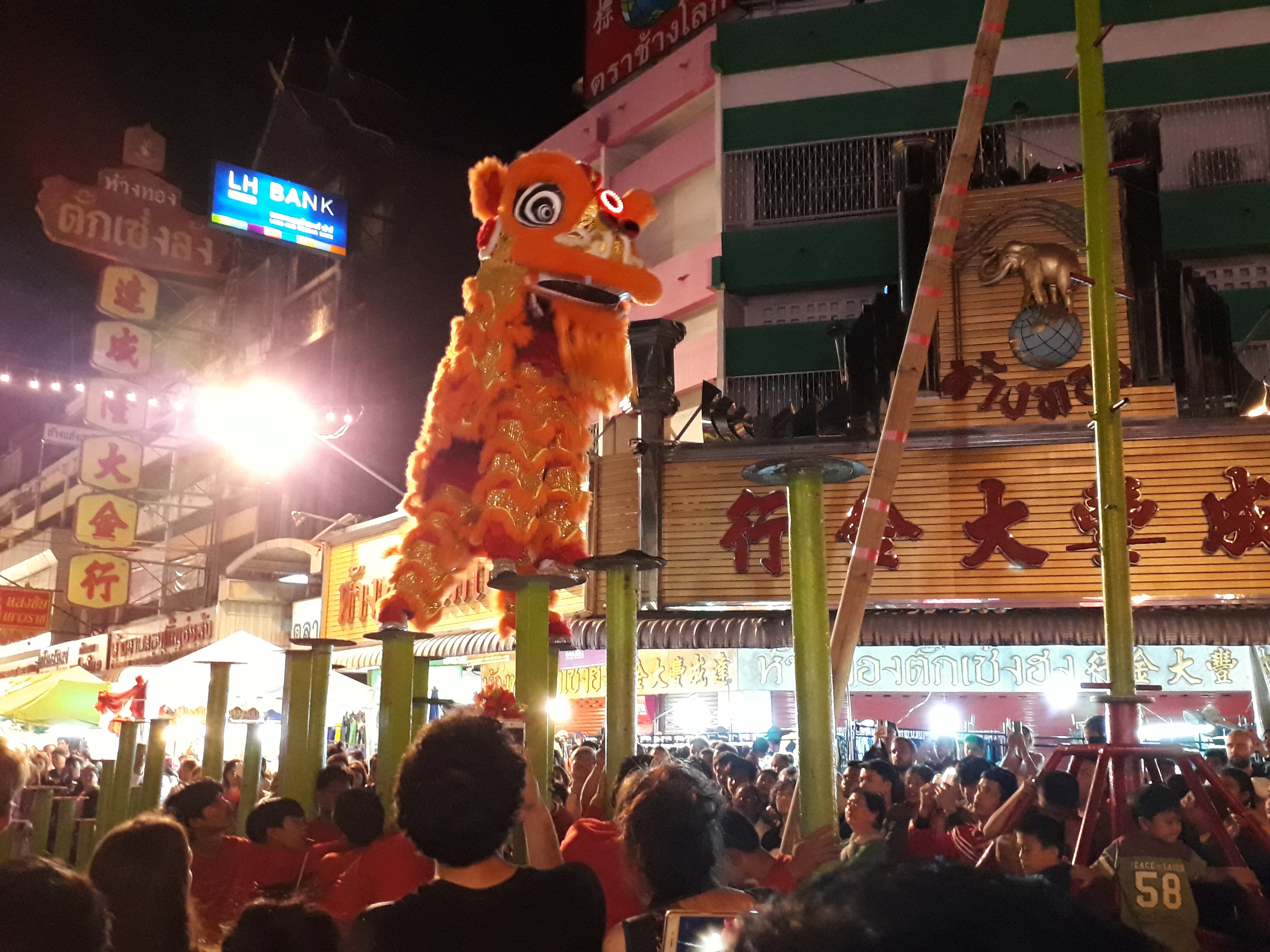 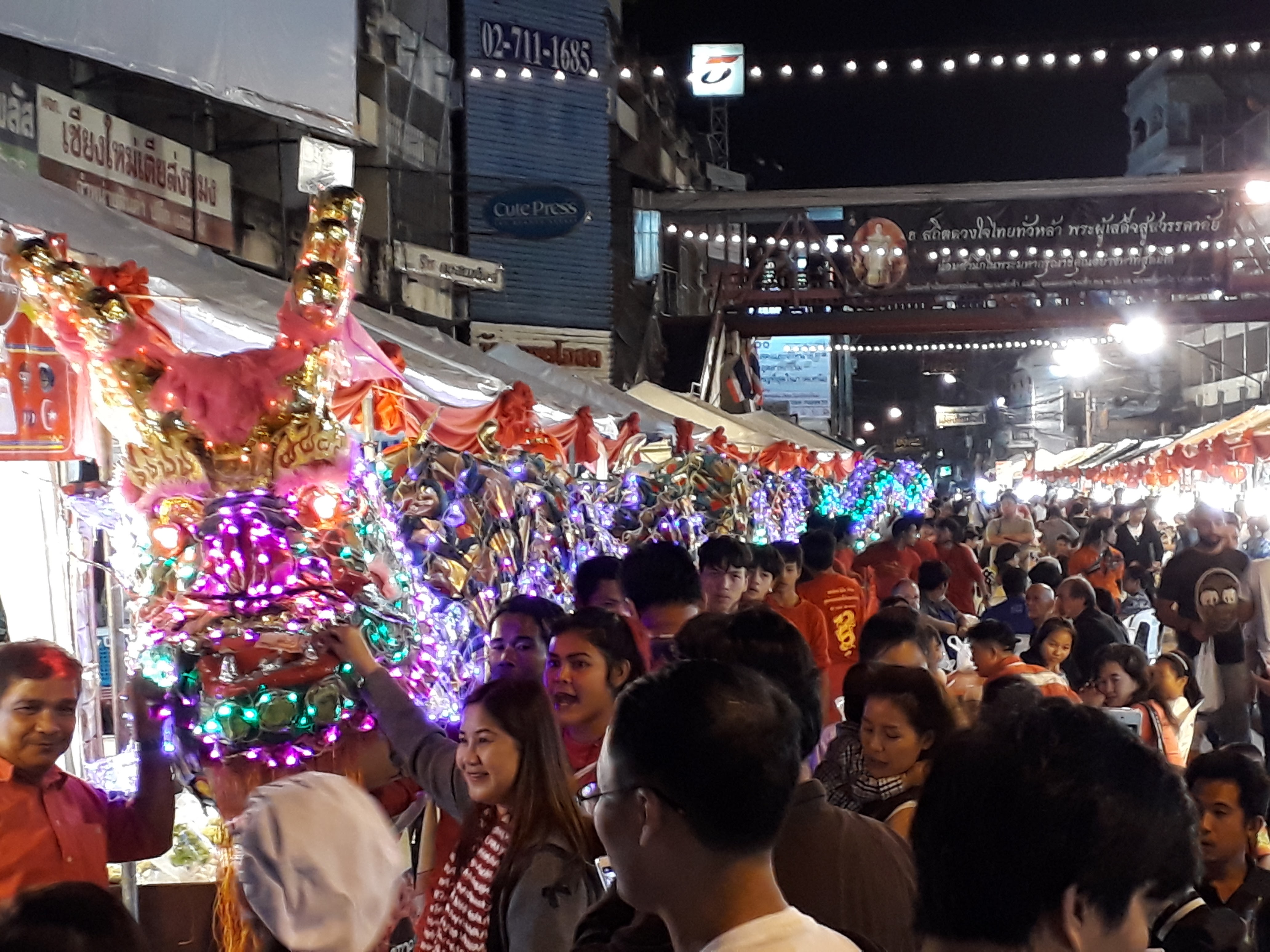 There are lots more festivals going on in Chiang Mai including music festivals, Full moon festivals, parades and fairs.

Sometimes we would hear about them from other people or we might just happen upon them as we walked around town.

One of the biggest festivals in Thailand is Songkran ( The Water Festival) which is very big in Chiang Mai and is held in April each year.

It celebrates Thai New Year and involves everyone basically soaking each other with buckets of water or firing water pistols/guns at each other.

We haven’t experienced Songkran so we can’t give our opinion on it, but it sounds fun. 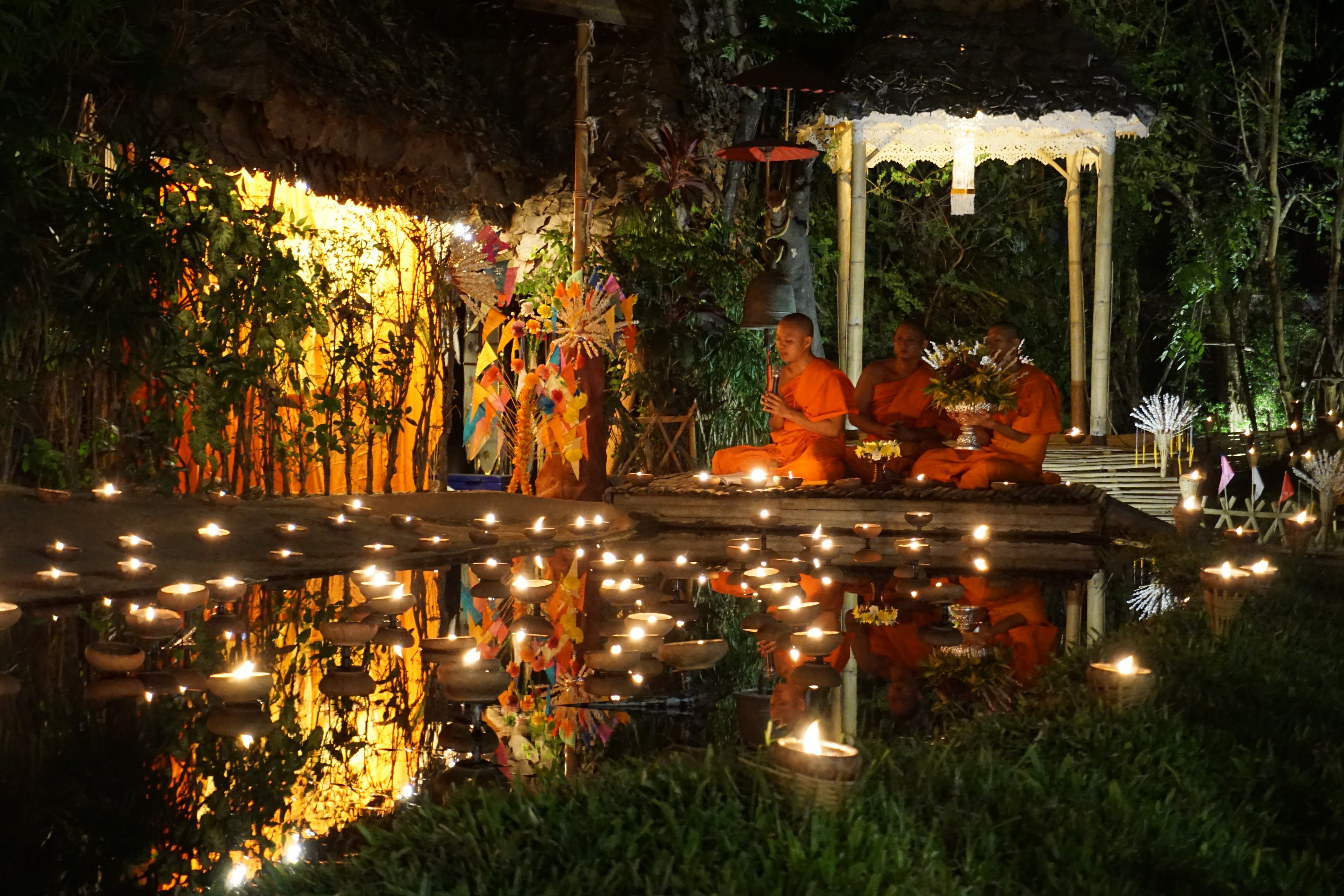