Bangkok To Chiang Mai By Train

Our taxi stood motionless in the sea of traffic surrounding us.

It was the rush hour in Bangkok and we were desperately trying to get to the  Hua Lamphong railway station.

We thought we’d left plenty of time to get to our sleeper for the journey from Bangkok-to-Chiang-Mai-by-train but it was beginning to look like we wouldn’t make it at all.

Firstly the taxi driver didn’t really know where he was heading then the traffic built up and we got stuck.

We had 15 mins before the 6 pm train that we were booked on was due to leave and the taxi wasn’t about to go anywhere. 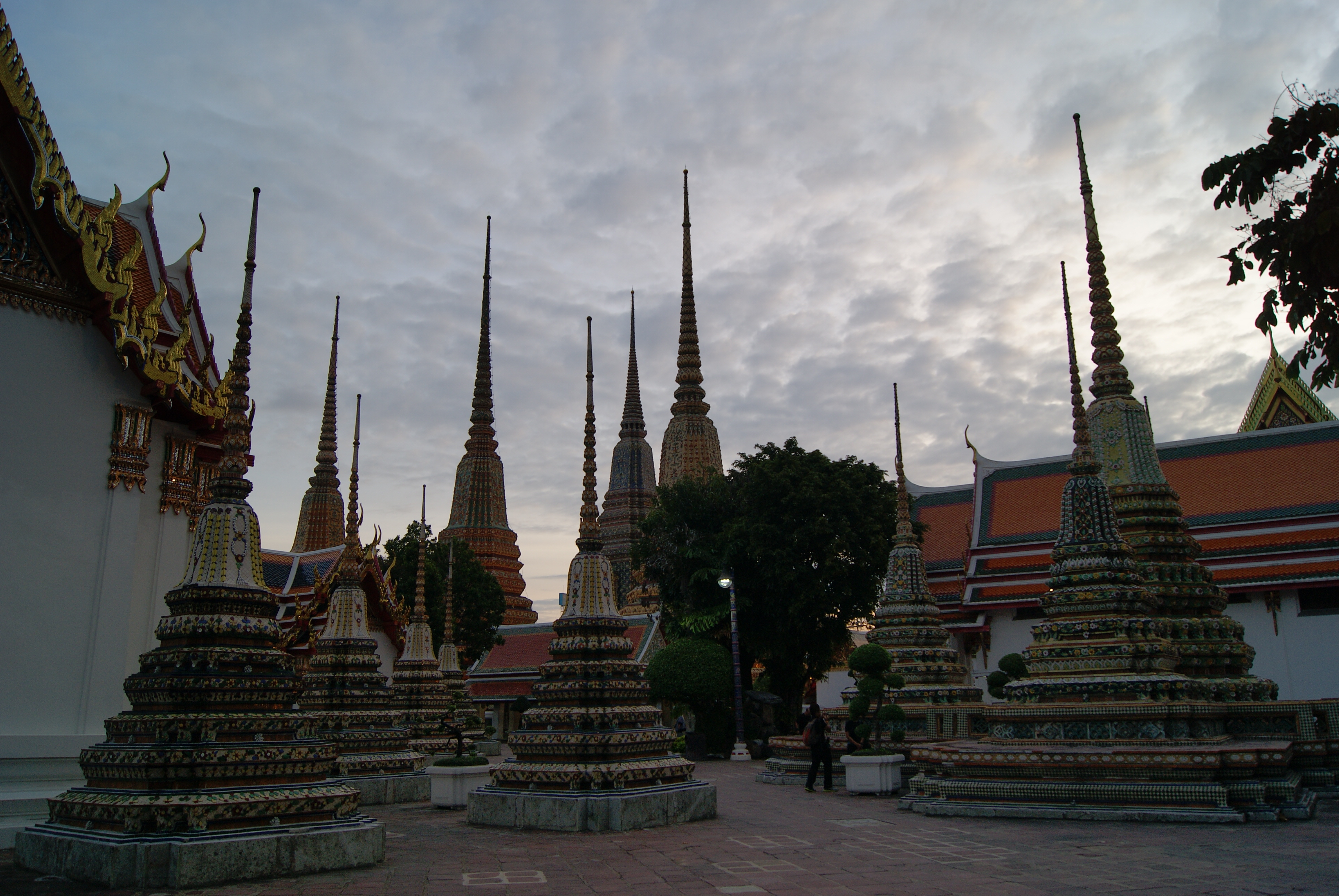 After being in Bangkok for a few days we were excited about heading North to Chiang Mai and by far the easiest and most inexpensive way of getting there would be by train and what better adventure than catching the overnight sleeper train from Bangkok.

We’d read all about it online and checked out the pricing and times but hadn’t booked the tickets.

Just down the road from our hostel, there was a travel agency that advertised train tickets so we thought we’d see how much they would charge us, to save us booking online or having to go to the railway station in advance.

Surprisingly the tickets were actually slightly cheaper through the agent than online.

We decided to travel in second class air-conditioned sleeper rather than first class because a first-class compartment doesn’t accommodate three and we’d heard that second class was fine.

So we chose two upper bunks and one lower bunk for Annabel.

A few days later and tickets in hand we jumped in the taxi eager to get to the station in plenty of time.

15 mins, how were we going to get to the station in time?

We made the decision to ditch the taxi, grabbed our backpacks and started walking, well running really.

The one problem we had now was to find the station.

A group of people came toward us so we asked them and they pointed us in the general direction as we sprinted off.

The station came into view and we made for it as quickly as we could.

Right on the steps of the station, the National anthem started to play and if any of you have been to Thailand before, you’ll know that etiquette requires you to stand still for the duration of the anthem.

Please, please we begged for the anthem to finish.

As it did, we dashed into the station and looked around for the correct platform.

There it was and the train was still there.

You have to board the train at your assigned carriage so we ran half way down the very long platform and at last made it onto the train.

Talk about cutting it fine. We’d made it with just 2 minutes to spare. 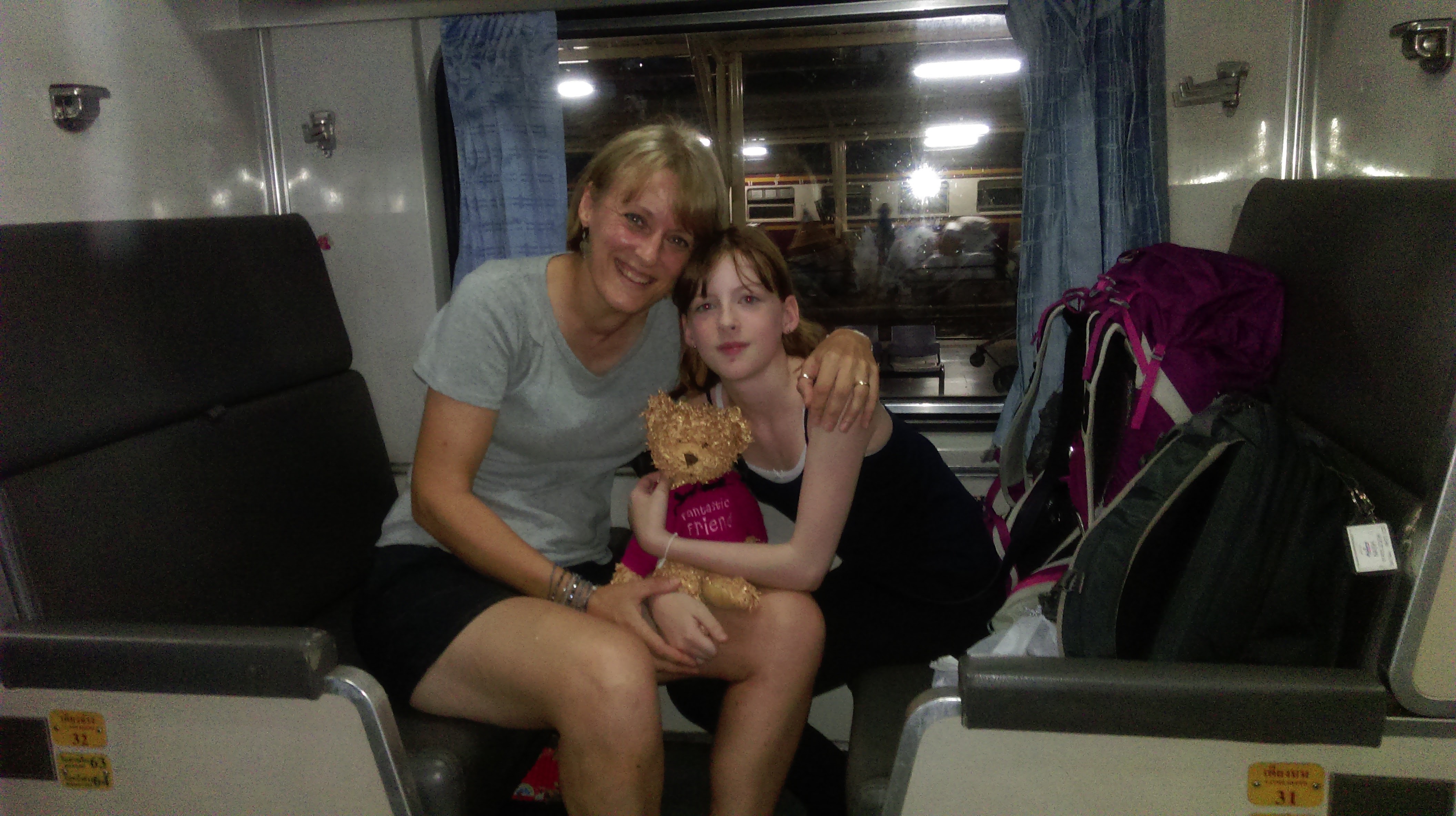 Just Made It On Board The Overnight Train To Chiang Mai

The train was much nicer than we’d imagined with large seats either side of the carriage that transform into the lower bunk bed.

As we pulled out of the station we felt relieved we had made the train and settled in for the journey.

Each carriage has an attendant that soon comes around to make up the beds.

With a well-used method, she assembled the seats into their sleeping positions, dropped the top bunk from it’s stowed away position and made the beds up with fresh linens and pillows.

Annabel had a lower bunk and Sue and I had top bunks either side of the central aisle that runs along the train.

The top bunks are narrower than the bottom which make them slightly cheaper but in retrospect, the bottom ones are much better with room for some luggage in with you as well as a view out of the window.

Of course, train travel is not the most peaceful way to travel as passengers are departing and arriving all night as the train makes stops, but it’s a lovely way to travel none the less. 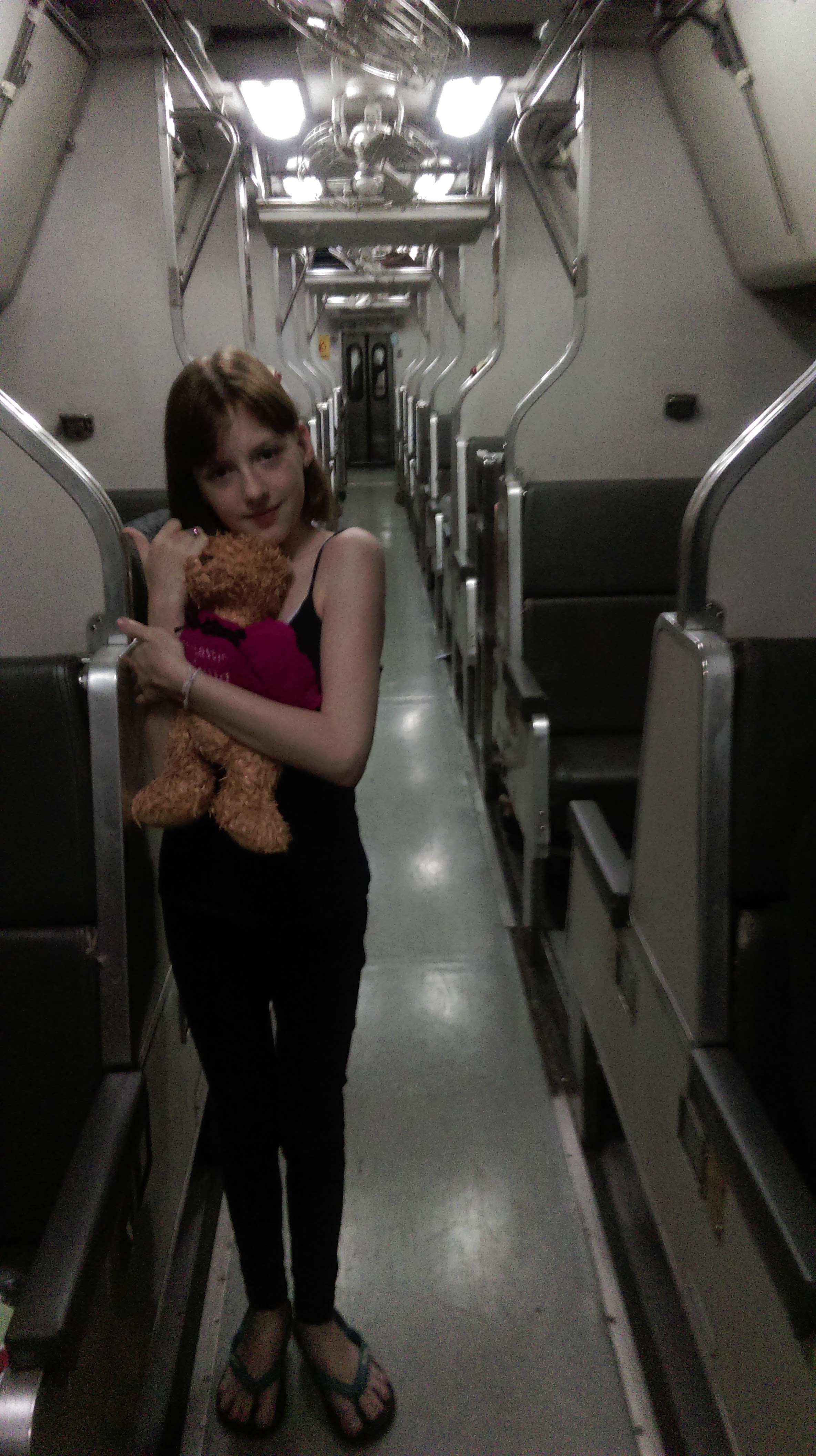 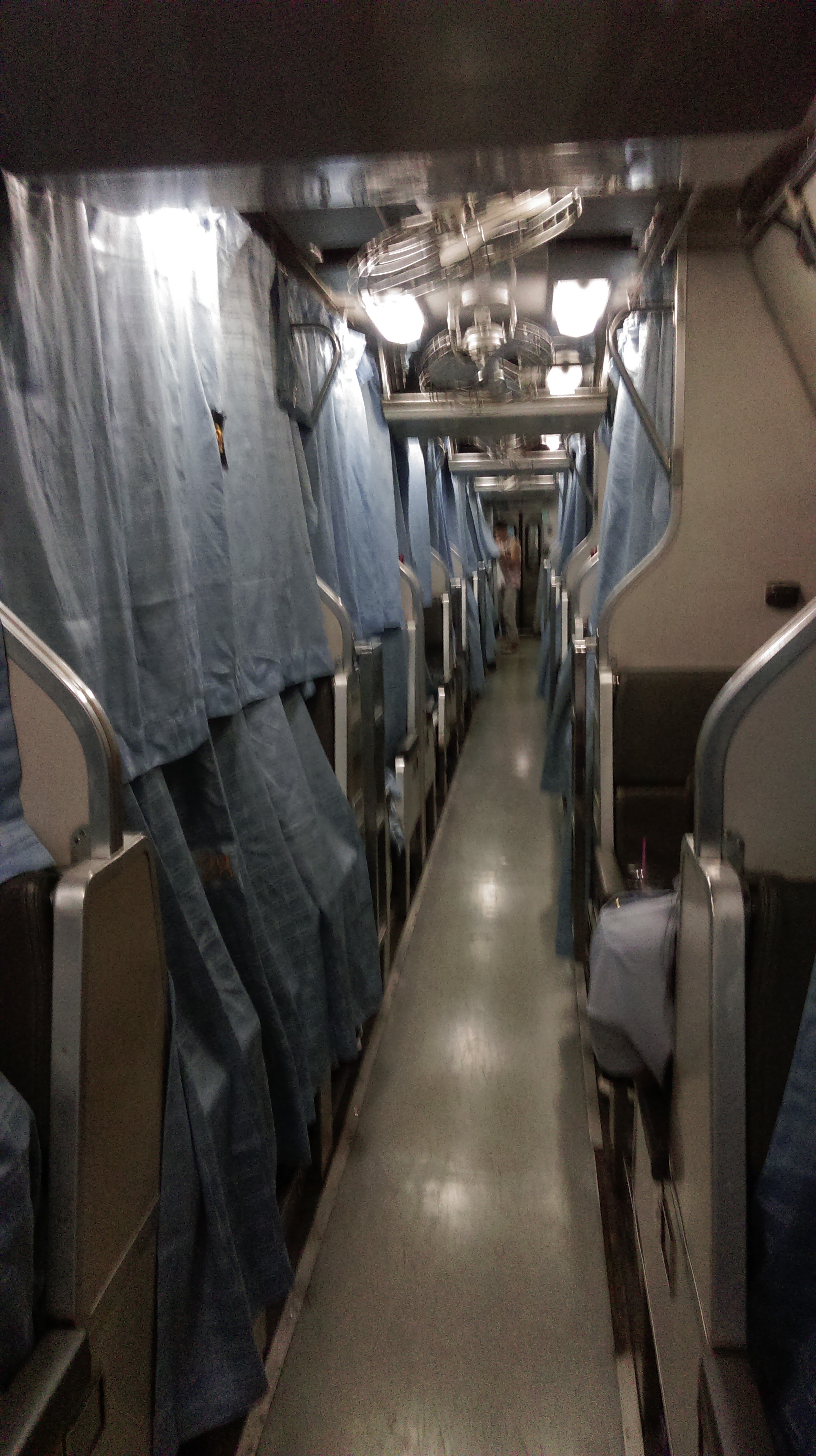 We bought our own food on board but you do have the choice to buy the overpriced containers of food that are bought through the train for sale.

Privacy is kept by curtains that run the length of the bunk bed and you have your own personal light.

The only problem we found, especially in the top bunk was that we were nearer the ceiling light in the aisle which shone through the gap at the top of the curtain.

After eating we retired to our bunks and got as much sleep as possible.

It feels very safe and we weren’t worried about theft or our safety at any point. 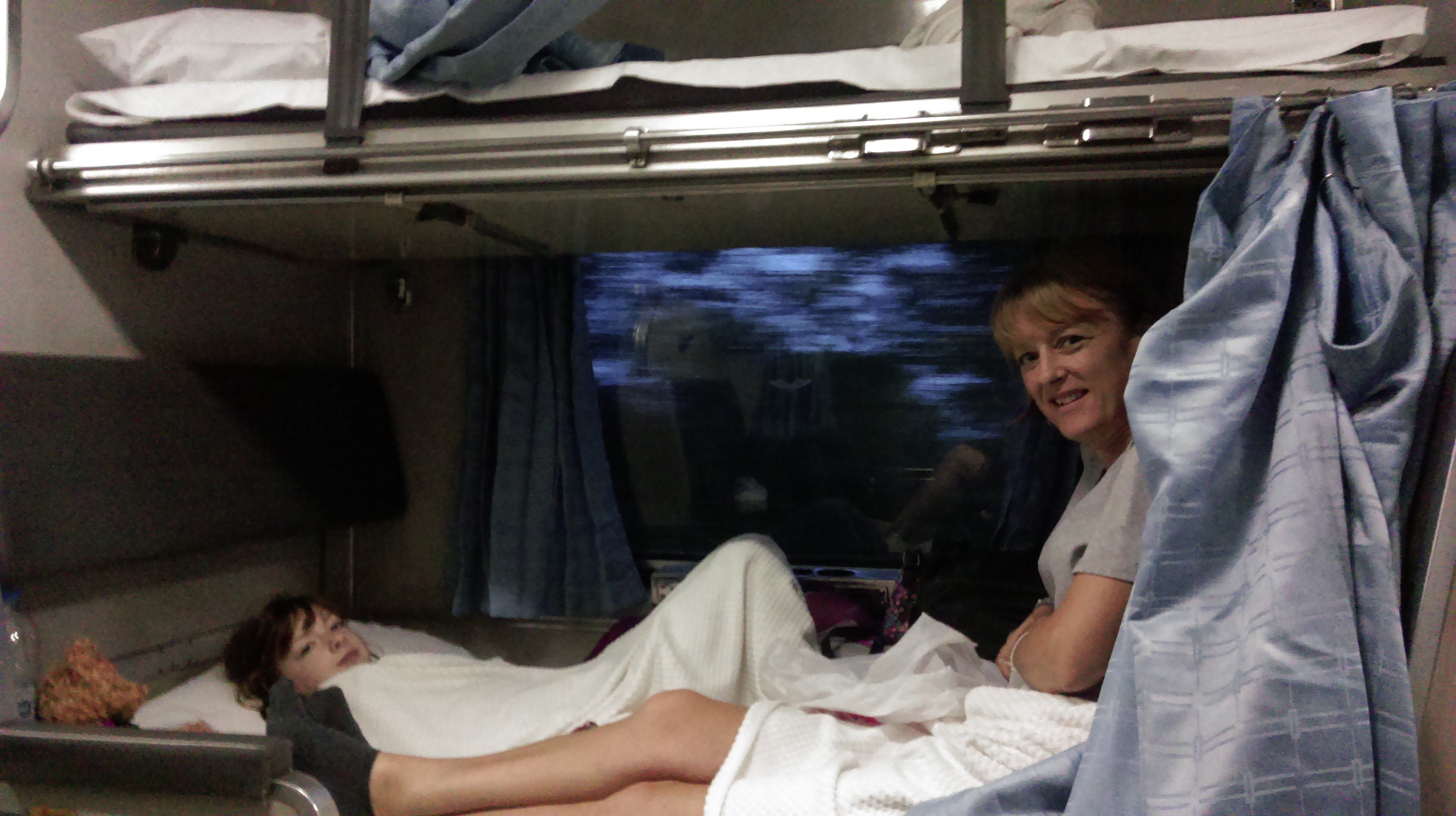 Tucked Up In The Comfy Bed

As the sun came up so the scenery in Northern Thailand came into view with its forests and hills.

The attendant came around again in the morning to dismantle all the beds into its daytime configuration as we readied ourselves for our arrival into Chiang Mai.

Chiang Mai is quite a small countryside station and is at the end of the line North so you can’t miss it.

The train pulled into the station at just gone 7 am so we decided to have breakfast in one of the small cafes by the station before getting a tuk-tuk into town.

Since our last journey, the Thai railways had updated some of their trains to newer Chinese carriages.

We found ourselves on one of the more modern trains which were very plush inside.

The general layout is the same as the older carriages but the decor is updated as well as the fittings etc.

There are tv screens showing the stations, new modern bathrooms and the bunks have power sockets etc. 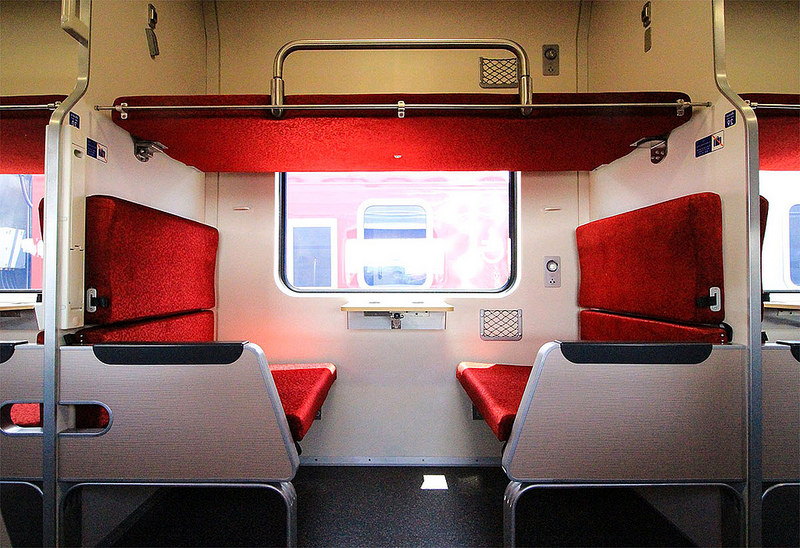 Seating On The Newer Trains

For loads, more info on train travel in Thailand and worldwide we use The Man In Seat 61 website

You can book seats on trains as well as find out more info on certain trains at 12Go.Asia

The main railway station in Bangkok is Hualamphong Station where trains for Chiang Mai leave from (this may change in the future as a new station is being built).

The journey to Chiang Mai from Bangkok takes approx 13 hours.

The train also runs during the day but by getting the early evening train from Bangkok, you get to see the scenery before arriving in Chiang Mai.

Train numbers 9 and 10 are the best trains. Number 9 from Bangkok at 6 pm going to Chiang Mai and train number 10 from Chiang Mai to Bangkok leaving at 6 pm.

Bring food and drinks on board for the journey. But alcohol is forbidden on board.

Use earplugs and eye covers for a sound sleep.

You can easily get to the station at Chiang Mai to buy your return tickets in advance.

Make sure you have plenty of time to get to the station in Bangkok, especially in rush hour, The trains are .punctual. 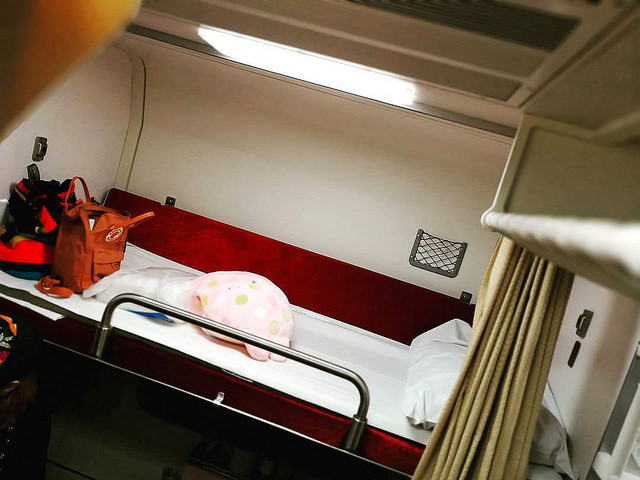 Sleeper On Board The Newer Style Of Train

The train was much more comfortable and cleaner than we thought it may be.

The Thais are very tidy and clean people overall so the standards are high even though the equipment may not be brand new.

The journey is great and even if you don’t sleep brilliantly the experience of riding the train is worth it.

We think the train always beats flying as it seems quite adventurous and very inexpensive compared to flying plus you get to meet people and see the scenery. 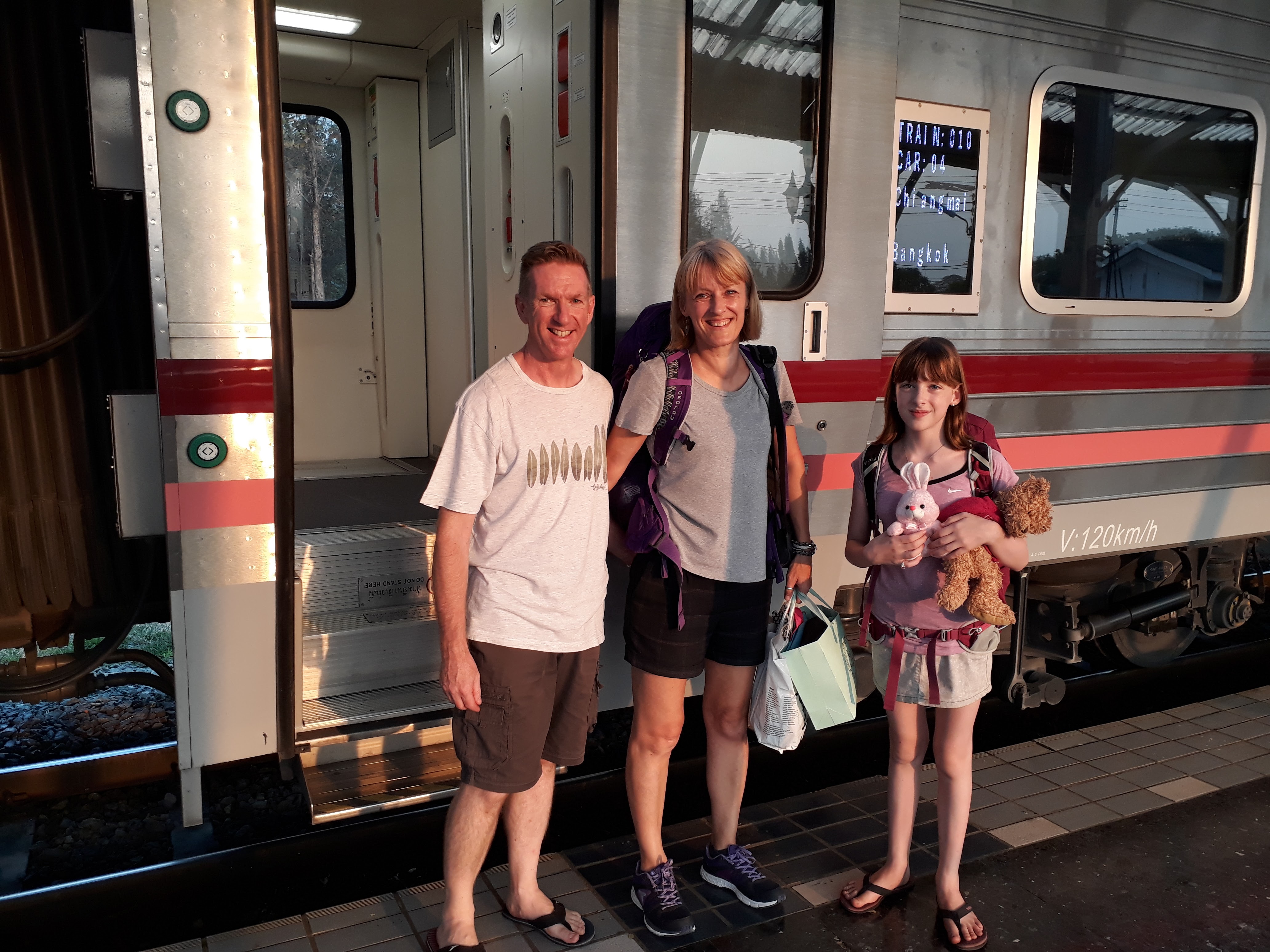